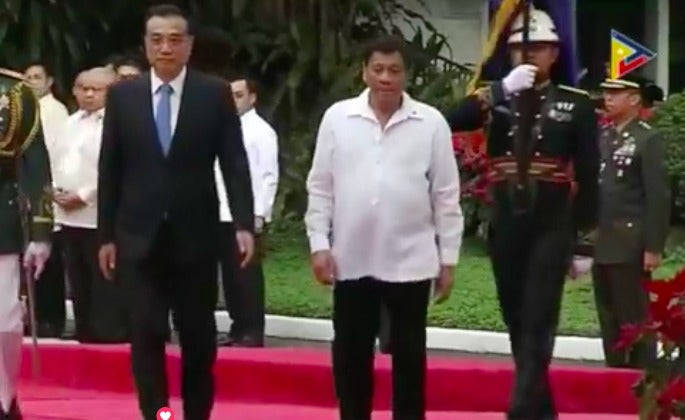 Turning a new page in Chinese-Philippine relations, President Rodrigo Duterte on Wednesday pulled out all the stops in welcoming Premier Li Keqiang to Malacanang in this first official visit by a Chinese premier to the Philippines in 10 years.

President Duterte held an extended bilateral meeting and hosted a state banquet for Premier Li after China promised to fast track the negotiations for the Code of Conduct on the South China Sea.

The bilateral meeting between President Duterte and Premier Li, one of the seven most powerful men in China, was held at Malacanang’s historic Aguinaldo State Dining Room, which is where Cabinet meetings are held.

“Premier Li’s visit is a momentous occasion for the Philippines as it marks the first visit of a Chinese Premier to Manila in 10 years. This shows the great strides that we have accomplished in the bilateral relations between our two countries since I assumed (office),” President Duterte said.

“I am pleased to note the positive turnaround and vigorous momentum of Philippines-China relations. Mutual trust and confidence-building have led to increased interaction on many levels of our two governments,” he said.

“Practical cooperation in many areas is bringing in an early harvest of tangible benefits,” Mr. Duterte said.

“Altogether, these concerted efforts of the Philippines and China have secured peace, stability, and development in the region,” he added.

The two sides also signed 14 agreements, including one on defense industry cooperation and another on a 200 million renminbi bond issuance. China also promised 150 million reminbi (P1.15 billion) worth of grants to help rebuild Marawi.