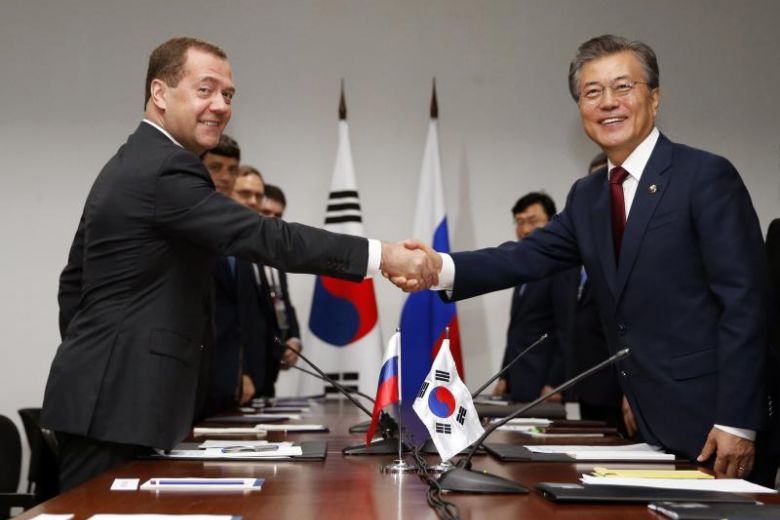 Russian Prime Minister Dmitry Medvedev (left) shakes hands with South Korean President Moon Jae In (right) during their meeting on the sidelines of the East Asia Summit in Manila. EPA-EFE via THE STRAITS TIMES

United States President Donald Trump and other world leaders yesterday (Nov 14) sought to put “maximum pressure” on North Korea, to compel it to stop its development of nuclear weapons and sit down for talks on de-escalating tensions.

In a draft statement on the East Asia Summit (EAS) seen by the media, the leaders of Asean’s 10 member-states as well as eight other Asia-Pacific nations, including the US, China, Japan and South Korea, urged all countries to fully implement United Nations sanctions against Pyongyang.

“We express grave concern over (North Korea’s) ongoing development of weapons of mass destruction, including nuclear and chemical weapons, and ballistic missile technologies, which are in contravention of UN Security Council resolutions,” they said. EAS members demanded that Pyongyang “abandon its nuclear and ballistic missile programmes in a complete, verifiable and irreversible manner”.

“If so, North Korea’s nuclear programme should be suspended, and negotiations could go on to pursue complete denuclearisation.”

Pyongyang has vowed never to give up its nuclear weapons.

Philippine President Rodrigo Duterte did not mince words, telling a press conference at the end of the summit that North Korea’s missile tests were a concern to every leader at the meetings.

People should pray that there is no conflict on the Korean peninsula, he said, adding that Pyongyang was “toying” with bombs.

“These actions pose a severe threat to regional peace, security and stability. Any miscalculation by any party will have very serious consequences,” Lee added.

He also urged Pyongyang “to desist from its provocations and abide by its international obligations and commitments”.

“There is no easy or quick solution to the issue. We need a combination of pressure and dialogue among all stakeholders to make progress on this delicate situation,” Lee said.

UN Security Council resolutions ban imports of coal, textiles and seafood from North Korea, and limit exports of crude oil and petroleum to the country. Sanctions also include calls to not grant work permits for North Korean workers.

Japanese Prime Minister Shinzo Abe told reporters in Manila that he had a frank exchange of views on the issue with fellow leaders.

“Soon, the severe winter will start in North Korea, and we have agreed to keep a close eye on the effect of sanctions,” he added.

“Maximum pressure should be placed so we can create a situation where North Korea can take the initiative and change its ways.”

Trump skipped the EAS proper because earlier meetings overran, but delivered his prepared remarks at a lunch with leaders before he left.

He later told reporters aboard Air Force One: “It’s been a great trip. It’s also been really good, in terms of North Korea and getting everybody together. I think their acts are all together.”