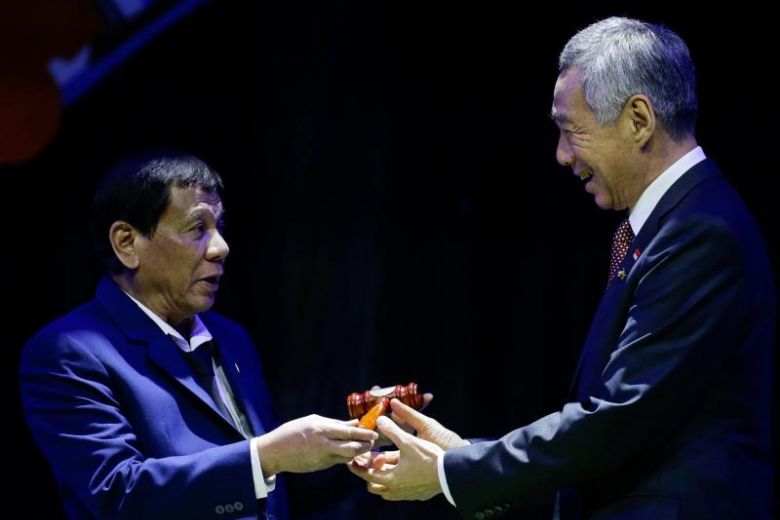 Philippine President Rodrigo Duterte hands over the gavel to Singapore Prime Minister Lee Hsien Loong during a transfer of Asean Chairmanship at the closing ceremonies of the 31st Asean Summit and Related Summits in Manila. PHOTO from EPA-EFE via The Straits Times/Asia News Network

Asean is a lifeboat for all 10 countries in South-east Asia to come together, Prime Minister Lee Hsien Loong said yesterday (Nov 14), on the cusp of Singapore’s helming the group.

Asean, which turned 50 this year, is a vehicle “to have our voice heard on the world stage and to be able to manage our own issues among ourselves, and to cooperate to improve the lives of the people in Southeast Asia”, he told Singapore reporters.

He also outlined Singapore’s key priorities as chair, captured in its tagline “Resilient and Innovative”, in a speech at last night’s closing ceremony for the 31st Asean Summit, the last major event on Asean’s calendar this year. Philippine President Rodrigo Duterte, the host, gave him a symbolic gavel to mark the hand-over of the rotating chairmanship.

PM Lee said Singapore, as Asean chairman next year, will seek to ensure the group promotes and upholds a rules-based regional order.

This is to better deal with emerging security challenges in the neighbourhood, such as cyber security, transnational crime and terrorism.

Singapore will also steer fellow members to press on with regional economic integration and enhance connectivity, so as to keep the region competitive and prosperous.

And it will find innovative ways to manage and make use of digital technologies, and equip Asean citizens with skills and capabilities.

The goal, he added, is for Asean to remain a central and dynamic driving force in the region that can deal with challenges and opportunities.

Singapore will also continue to build relations with Asean’s external partners, PM Lee added. If it can make Asean more effective and strengthen cooperation with its neighbours, this will benefit the man on the street, he said.

“It means for Singapore a stabler world to live in, a safer South-east Asia in which we can operate, a more prosperous region in which we can grow our economy, expand our markets and seize opportunities which will be there,” he said.

PM Lee also congratulated the Philippines for its successful chairmanship. A major highlight was a framework for the Code of Conduct of Parties in the South China Sea.

Building on this, Asean and China agreed to start talks on the code, both sides said at the Asean-China Summit with Chinese Premier Li Keqiang on Monday (Nov 13). These talks will begin early next year, PM Lee told Singapore reporters yesterday.

Trade was featured prominently, as leaders spoke of the need to send a signal of commitment to free trade and open markets.

They acknowledged the hurdles in the way of concluding talks on the Asean-led Regional Comprehensive Economic Partnership, and PM Lee said Singapore will do all it can to push negotiations forward.

He thanked Asean Secretary-General Le Luong Minh, whose term is ending soon, and his staff and welcomed his successor Lim Jock Hoi, Brunei’s permanent secretary for foreign affairs and trade. “Singapore looks forward to working closely with you and the secretariat to strengthen Asean’s community-building efforts,” said PM Lee.

He also told reporters that Indian Prime Minister Narendra Modi, whom he met yesterday, had agreed to visit Singapore to speak at the Shangri-La Dialogue next year. “I’m very happy to say that he looks forward to coming, and we’ll be working on it.”