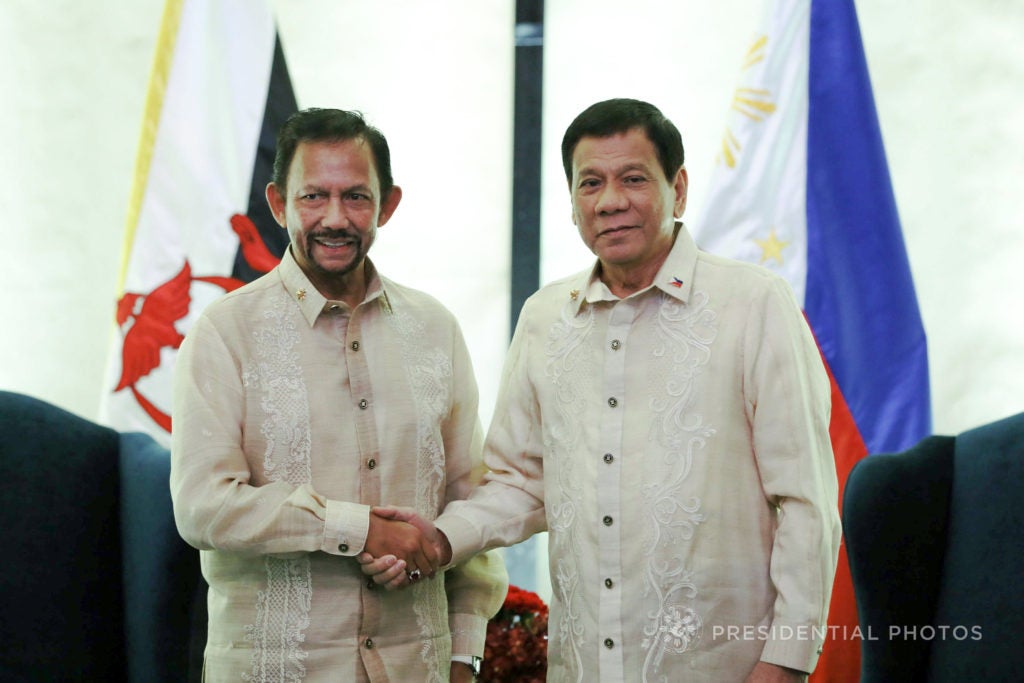 President Rodrigo Roa Duterte poses for a photo with Sultan and Yang Di-Pertuan of Brunei Darussalam Hassanal Bolkiah prior to the start of their bilateral meeting at the SMX Convention Center in Pasay City on November 12, 2017. ACE MORANDANTE/PRESIDENTIAL PHOTO

Sultan Haji Hassanal Bolkiah on Monday afternoon attended the 5th Asean-United States Summit and the 20th Asean-China Summit which were held at the PhilippineInternational Convention Center in Manila.

The Asean-US Summit began with opening remarks by Rodrigo Roa Duterte, President of the Republic of the Philippines as Chairman of Asean, who welcomed Donald J Trump, the President of the United States of America to the Summit. This was followed by a statement from President Trump.

During the summit, His Majesty delivered a titah which among others highlighted the United States as a valuable and strategic partner of Asean, and expressed appreciation to the United States’ continued commitment to the region.

In commemorating 40 years of Asean-US partnership, His Majesty highlighted the importance of Asean and the United States working together to promote global growth and stability.

Under the economic cooperation, His Majesty called for greater collaboration amongst Asean and the United States’ companies, especially micro, small and medium enterprises (MSMEs) in promoting innovation and entrepreneurship.

His Majesty then attended the 20th Asean-China Summit, which began with welcoming remarks by President Duterte welcoming Li Keqiang, the Premier of the State Council of the People’s Republic of China to the Summit. This was followed by a statement from Premier Li.

President Duterte then invited Lee Hsien Loong, Prime Minister of the Republic of Singapore as the Country Coordinator for Asean-China relations to convey the Asean Common Statement.

During this Summit, His Majesty conveyed a titah urging Asean and China to work closely to conclude the Regional Comprehensive Economic Partnership as soon as possible to further strenghten the economic links between countries in the region.

His Majesty greatly valued the support and contributions of China as a significant strategic partner of Asean towards enhancing peace, stability and prosperity in the region.

His Majesty then recounted his attendance at the 14th China-Asean Expo (CAEXPO) held last September in Nanning and was pleased to work with China in which Brunei Darussalam was accorded Country of Honour twice since 2006.

His Majesty commended the impact of the expo has had in creating new opportunities for trade and business for the region and looked forward to China’s continued support for the participation of MSMEs in regional and global value chains.

His Majesty also highlighted the need to ensure that businesses are prepared for the Fourth Industrial Revolution. In this regard, His Majesty looked forward to collaboration in areas such as technological innovation and the digital economy during the Asean-China Year of Innovation in 2018.