UK paper on Asean handshake photo: ‘Hand in hand with a killer’ 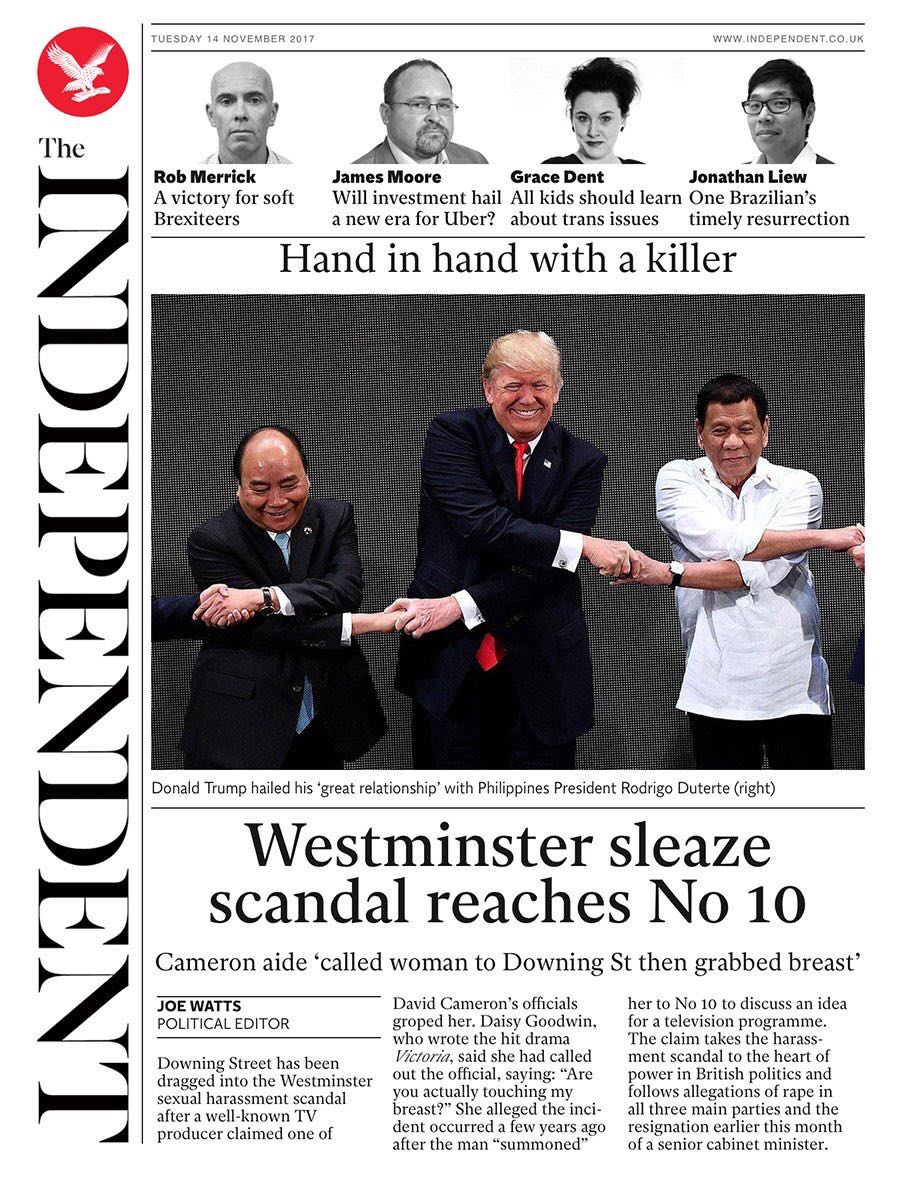 The front page of the British online newspaper “The Independent.” SCREENGRAB from website

A British online newspaper published on Tuesday a banner photo of United States President Donald Trump and Philippine President Rodrigo Duterte in the Association of Southeast Asian Nations (Asean) traditional handshake with the headline, “Hand in hand with a killer.”

“The Independent,” one of the most-read online news websites in the United Kingdom, published the photo on its front page with the caption: “Donald Trump hailed his ‘great relationship’ with Philippines President Rodrigo Duterte.”

The photo was taken on Monday, during the first day of the 31st Asean Summit and Related Summits held in Manila.

The paper, however, did not name who is the “killer” it is referring to, or elaborate on the words they used in the headline for the main photo.

Duterte, in different event, admitted stabbing to death a person when he was a teenager after he was involved in a brawl.

READ: Duterte’s ‘I stabbed someone’ tale: A joke or not?

Trump reaffirmed on Monday the United States’ “great relations” with Duterte during their bilateral meeting and assured the Filipino leader that he has always been a friend administration.

Duterte was friendly with Trump, contrary to how he spoke of former President Barack Obama. For several times, Duterte slammed the former American leader for interfering in the Philippines’ domestic affairs, particularly on the issue of human-rights violations linked to the government’s murderous campaign against drugs.

Presidential Spokesperson Harry Roque said Trump and Duterte got along well because they share the common “feeling” against Obama.

“It’s very apparent that both of them have a person who they consider not their best friend. They have similar feelings towards former US President Barack Obama,” Roque said.

Trump is in Manila for the two-day Asean Summit, his first visit to the Philippines as the United States president. /jpv