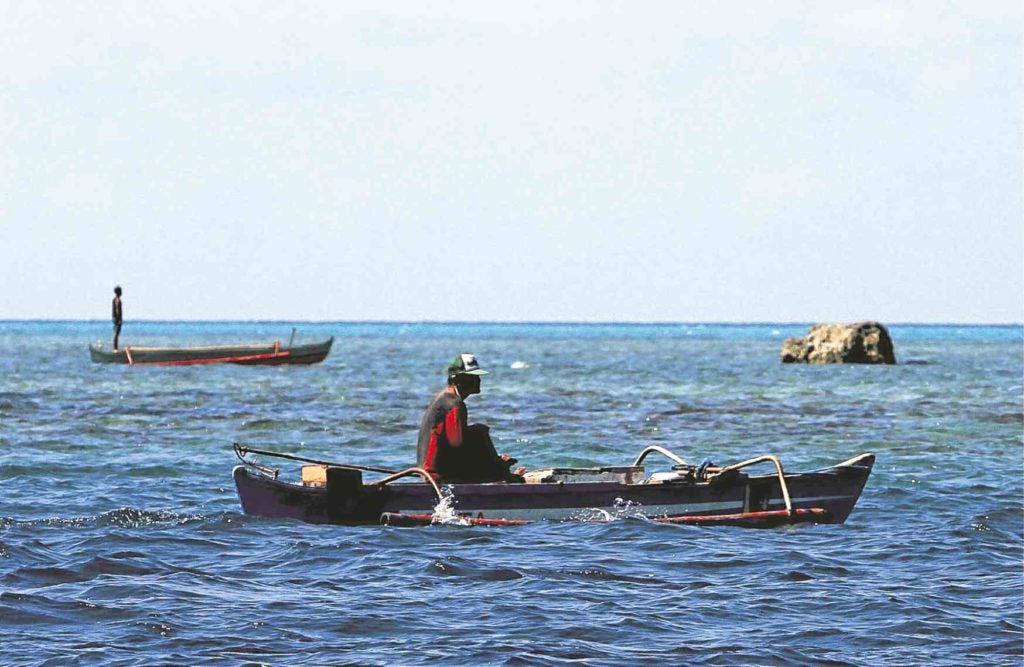 FISHING GROUND Fishermen use small boats to navigate the shallow portions of Panatag Shoal in the West Philippine Sea, a rich fishing ground that has given livelihood to coastal communities in the provinces of Zambales and Pangasinan. —RICHARD REYES

“We do not send Navy ships to the area anymore. We send only the Philippine Coast Guard and fishing boats there so the Chinese no longer harass you there,” Esperon told fishermen when he led the distribution of fishing boats, gear and equipment for the fishing communities of this western Pangasinan town on Friday.

But Esperon also encouraged the fishermen to report to authorities any experience of bullying from the Chinese, “so we would know what to do.”

“It’s just Coast Guard to Coast Guard and fishermen to fishermen, so we are avoiding conflict [at Panatag],” he said.

Two days later, Navy personnel boarded one of the foreign vessels and found illegally collected corals, giant clams and live sharks. Tension arose when the Navy tried to arrest the foreign fishermen and were blocked by Chinese maritime surveillance ships.

Chinese ships seized the shoal that same year and had stopped entry of local fishermen until President Duterte brokered a deal with China when he assumed office in 2016.

An international tribunal also ruled that China had no claim over the West Philippine Sea, although China refused to honor the decision.

Esperon asked the fishermen to “give back” by guarding the sea from illegal fishing activities.

He promised to give them radio sets to make reporting efficient.

Esperon led the distribution of 29 boats of different sizes, “payaw” (fish aggregating devices) and other equipment worth P4.5 million to fishermen in Bolinao town and Alaminos City.

Read Next
Albay to host Asean maritime forum
EDITORS' PICK
PH preps for China virus: Question of when, not if
Museums ‘put to sleep,’ churches closed amid volcano’s unrest
SM continues to send relief assistance to remote towns in Batangas
Beyond water service: Maynilad builds massive infrastructure projects to clean up Metro Manila waterways
Seventh judge assigned to handle De Lima case
Timeless Elegance in the Philippines’ Most Distinguished Home Kitchens
MOST READ
Lacson on Duterte’s threat to end VFA over Bato’s canceled visa: Where is the connection?
Part of Aurora Boulevard in Cubao closed from Jan. 25 – Feb. 1
No Bato visa, no VFA–Duterte
Corruption worsens: PH falls 14 notches to 113th spot in global index 2019
Don't miss out on the latest news and information.