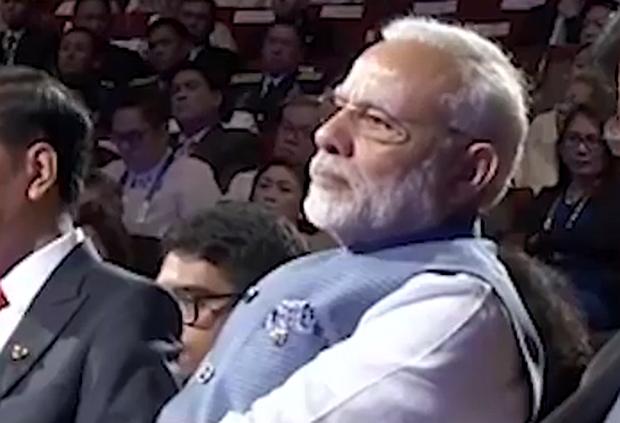 Indian Prime Minister listens to the opening remarks of Philippine President Rodrigo Duterte at the 31st ASEAN Summit on Monday, Nov. 13, 2017. (Photo from an RTVM video)

Indian Prime Minister Narendra Modi on Monday afternoon graced the distribution of 150 free prosthetic limbs to poor Filipino amputees at the Museum of the History of Ideas inside the compound of the Philippine General Hospital (PGH) in Manila.

Ten soldiers wounded in Marawi will be among the recipients. They were, however, not allowed to leave the camp for the event, which was organized by Mahaveer Philippine Foundation, Inc.

The artificial limbs, called Jaipur Foot, were designed in India but made by Filipino workers.

Modi was welcomed by the foundation head Veerendra Mehta, former Manila Councilor Felix Espiritu and Enrique Lim. Media coverage was not allowed during Modi’s brief stay in the museum.

Espirutu said the foundation has been giving away free prosthetic limbs to Filipino amputees for the past 28 years.

“It is a low cost, rapid fit limb cosmetically close to a normal human limb. It permits patients to walk, run, climb, squat, and swim,” according to a statement distributed by the foundation.

Most of the beneficiaries are adult males suffering from diabetes.

Ratna Ezra, one of the foundation trustees, said they did not discriminate among the beneficiaries. As long as they were poor and in need, the foundation would welcome them. /atm