With Prime Minister Malcolm Turnbull in attendance, soldiers from the Philippine Army and Australia Defense Force showcased their abilities in urban warfare at Camp Aguinaldo weeks after the five-month siege against Islamic State-linked terrorists in Marawi City.

A small batch of Australian forces is in the country to train local troops to combat the spread of ISIS. While the Marawi crisis was declared officially over in late October, there are fears by Australia that the ISIS will gain a strong position in the region. 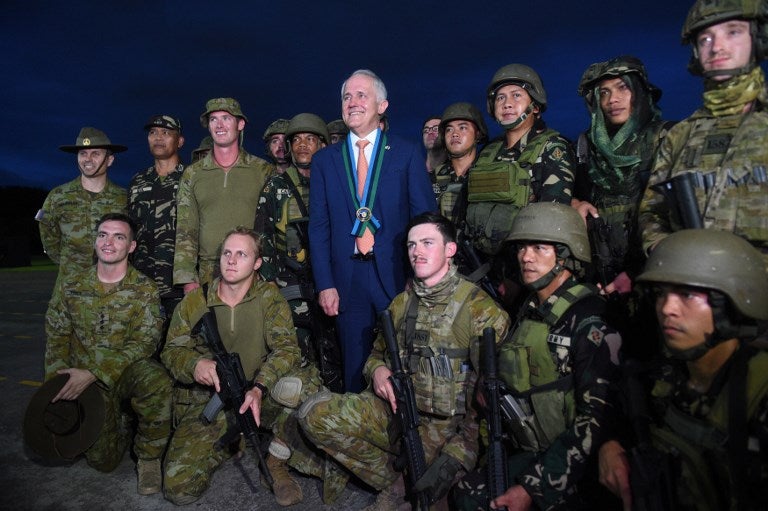 Australian Prime Minister Malcolm Turnbull (C) poses in a group photo with soldiers after watching an anti-terrorism simulation drill by Australian and Philippine soldiers during a visit to the military headquarters in Quezon City on November 13, 2017, on the sidelines of the Southeast Asian Nations (ASEAN) Summit. / AFP PHOTO / TED ALJIBE

Turnbull, who is in the Philippines for the Association of Southeast Asian Nations Summit, paid a visit to the military’s main headquarters on Monday.

“Australia and the Philippines are in the same fight. To fight for freedom is a global one and it’s all connected. Many of the fighters were from all over the world — they come from Indonesia or Malaysia, some from the Middle East. President Duterte and the Armed Forces, you were able to bring an end to insurgency quickly,” Turnbull said after the short demonstration.

In the demonstration, the government forces assaulted an identified enemy safehouse in a heavily populated area. In the 10-minute drill, the troops were able to defuse the bomb and clear the safehouse. 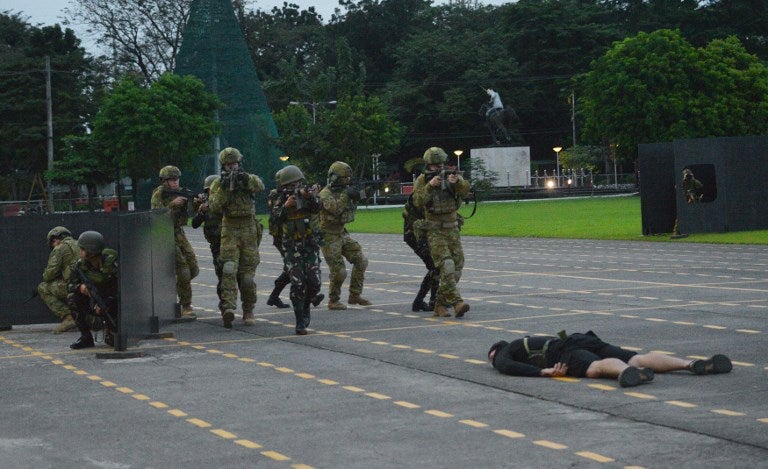 Australian and Philippine soldiers simulate and anti-terrorism drill during a visit by Australian Prime Minister Malcolm Turnbull (not pictured) to the military headquarters in Manila on November 13, 2017, on the sidelines of the Southeast Asian Nations (ASEAN) Summit. / AFP PHOTO / TED ALJIBE

“We are all in the same fight now more than ever Australian Defense Force and the Armed Forces of the Philippines are working together, supporting each other, learning from each other, fighting the fight, we can’t afford to lose,” Turnbull said.

He said the ISIS has built a reputation of invincibility in Iraq and Syria, and they cannot afford to let them have a foothold anywhere else or in the region.

Armed Forces chief Gen. Rey Leonardo Guerrero said they discussed the need to build up the cooperation of the military of the two countries.

“Ang (The) concerns particularly in fighting terrorism ang napagusapan (were discussed)…so we agreed that the military cooperation between the ADF and AFP should be strengthened,” he said. 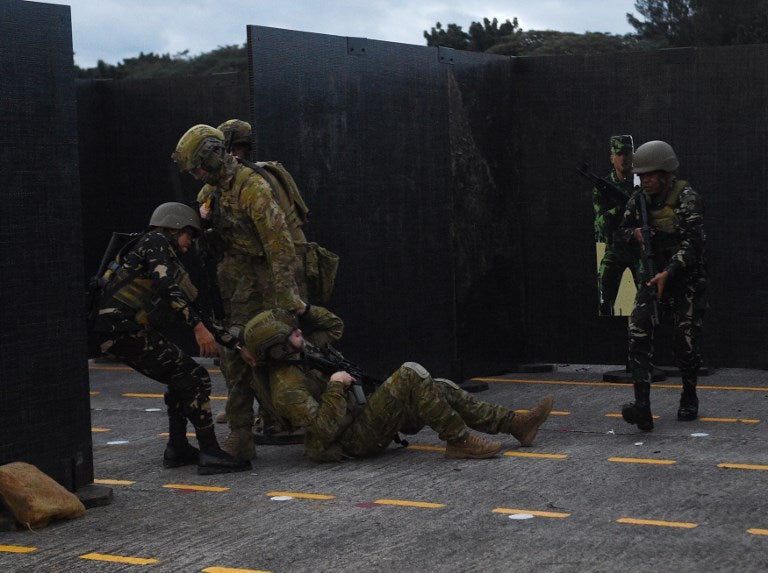 Australian and Philippine soldiers carry a wounded colleague in a simulation of anti-terrorism drill during a visit by Australian Prime Minister Malcolm Turnbull (not pictured) to the military headquarters in Quezon City on November 13, 2017, on the sidelines of the Southeast Asian Nations (ASEAN) Summit. / AFP PHOTO / TED ALJIBE

Philippine military officials have earlier admitted their struggle in urban fighting during the Marawi siege, as the troops are accustomed to fight in the jungles.

Other than training the members of the Philippine Army on urban warfare and counterterrorism, Australia had provided assistance during the Marawi crisis by deploying two AP-3C Orion aircraft for surveillance and intelligence sharing.

Security officials declared last Oct. 24 the end of the five-month battle that claimed about 1,000 lives and destroyed almost the entire city into ruins. /je