Asean at odds ahead of Rohingya crisis statement 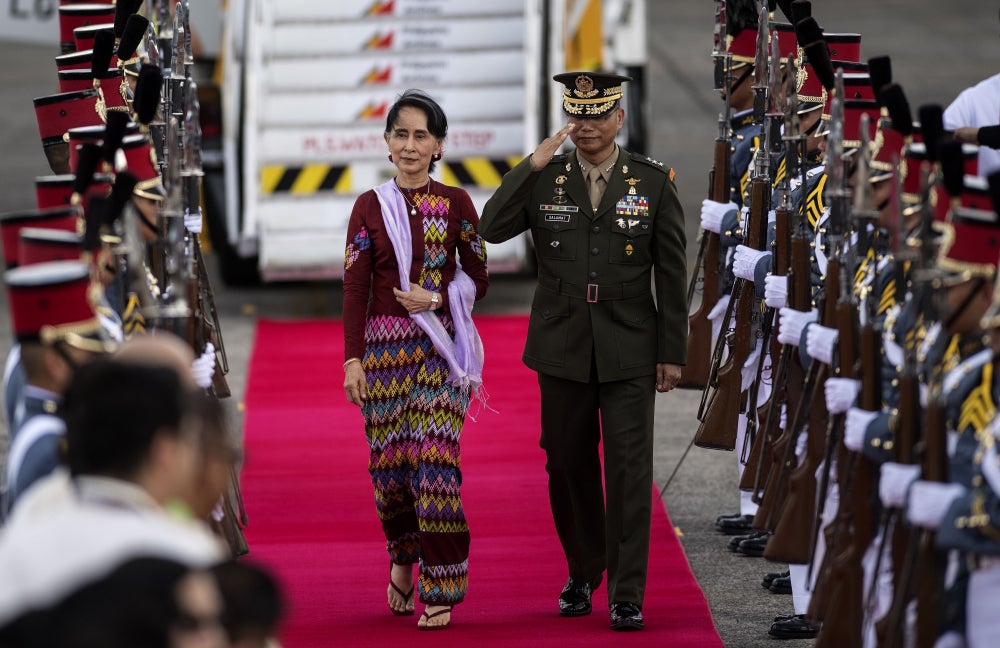 Myanmar’s Rohingya crisis will raise temperatures at the Asean summit in Manila this week as leaders of the grouping gathered in the Philippines yesterday for their annual summit and related meetings with partners from around the globe. Asean leaders will address the crisis in Myanmar’s Rakhine state, although there still is no consensus on how far they should intervene to address the problem.

The issue will feature in the chairman’s statement issued at the end of the meeting, according to an Asean official who asked to remain anonymous, but the content has not been publicly disclosed.

The Myanmar delegation to the Asean summit has said de facto civilian leader Aung San Suu Kyi would raise the issue on her own at the meeting, the official said.

“Myanmar’s stance is to open for cooperation from Asean to ease the problem,” he said. Another anonymous Asean official said Myanmar and Bangladeshi foreign ministers had met for at least three times to work on refugees’ repatriation in Rakhine state.

Asean countries were expected continue to highlight the Asean Coordinating Centre for Humanitarian Assistance on disaster management to provide aid to the affected state, the same source added.

Conflict in Myanmar’s Rakhine state became an international issue in August after a militant group launched a series of attacks on security outposts in the state, prompting a harsh “clearance operation” by the Myanmar military. More than 600,000 people from Rakhine have fled the violence to Bangladesh.

Suu Kyi’s government has been accused of doing very little to contain the violence and safeguard Muslim Rohingya, whom authorities call “Bengali”, in a term that deprives them of citizenship status.

The United Nations has recently called on Nay Pyi Taw to grant citizenship to Rohingya, which was described as a “fundamental right”.

Asean members have taken different approaches to the crisis. While many of the group such as Thailand regard the problem as an internal Myanmar affair and limit their involvement only to humanitarian aid, others such as Malaysia want the group to address the issue at its root cause, notably the clearance policy.

Leaders will also discuss the contentious South China Sea as many members of the group, notably the current chair Philippines and Vietnam, have been at loggerheads with China over territorial disputes. Philippine President Rodrigo Duterte yesterday said his country would like to “remain friends” regarding China and the controversial sea, as it was in the best interests of everyone to save lives and not trigger a war.

“I do not waste the lives of countrymen in a useless war that cannot be won by anybody. Xi Jinping made it clear to us the only way to go is cooperation,” Duterte said yesterday. “The sea is better left untouched. Nobody can afford to go to war.”In a departure from the previous administration, the Philippines under Duterte has taken relatively soft stance towards China regarding the contentious sea and sought bilateral channels to ease the conflict.

The Asean chairman’s statement, meanwhile, will also mention the South China Sea but refrain from using any incendiary language that could further deepen the rift.

Asean and China are now working on a legally binding code of conduct to regulate countries’ behaviour in the sea. Both sides had already agreed on the framework for the code and would begin negotiations on the text in January, the official said.The group and China signed the 2002 non-binding Declaration on the Conduct of the Parties in the South China Sea (DOC), but the document has failed to prevent tensions related to the dispute. The group over past years has worked on another document intended to ensure stability over the issue.