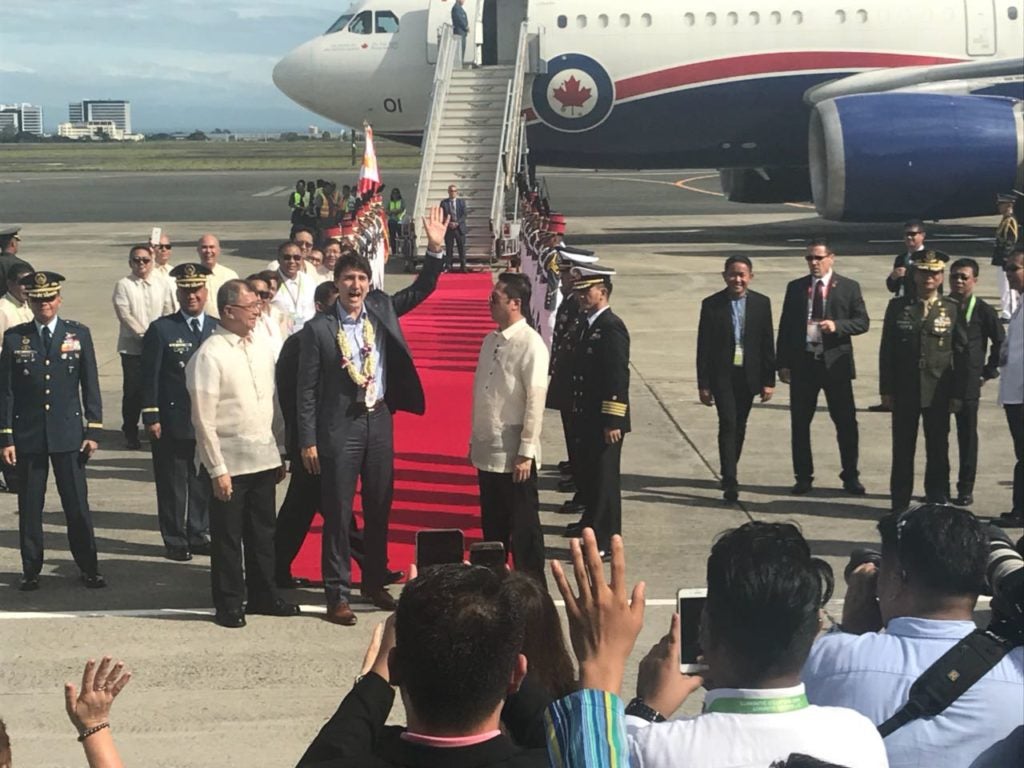 Canadian Prime Minister Justin Trudeau waves to well-wishers after arriving at the Clark International Airport on Sunday, Nov. 12, 2017. Trudeau is in the Philippines for the Asean Summit. INQUIRER.NET / JHOANNA BALLARAN

Aboard a government plane, Trudeau arrived at the Clark International Airport at 1:43 p.m. He was welcomed by Science and Technology Secretary Fortunato Dela Peña.

Trudeau is among the 21 world leaders attending the Summits in the next three days in different venues in Manila.

Like the preceding leaders who arrived in the airport, Trudeau was warmly received by 2,000 school children in Filipiniana attire dancing to traditional music played by a band. He was also welcomed by a military marching band.

Trudeau’s charisma over some Filipinos has faded as the tons of garbage from Canada shipped to the Philippines in 2013 remained in Philippine ports despite him discussing a “Canadian solution$” to the problem.

“I’ve also been told that there is a Canadian solution in the process of being developed,” he said in 2015.

Environmental activists slammed Trudeau on Saturday for his apparent inaction over the issue and demanded that Canada take back the 1,300-ton garbage shipment.

“The overstaying containers of contraband garbage shipments in our port provide a stinking evidence that the touted ‘Canadian solution’ is nothing but a hollow word,” activist priest Fr. Robert Reyes said.

“Canadian trash has been rotting in the Port of Manila for several years. Trudeau should take it back with him home to Canada,” added BAN Toxics’ spokesperson, Anna Kapunan.