Widodo welcomed at Clark ahead of Asean summit | Global News

Widodo welcomed at Clark ahead of Asean summit 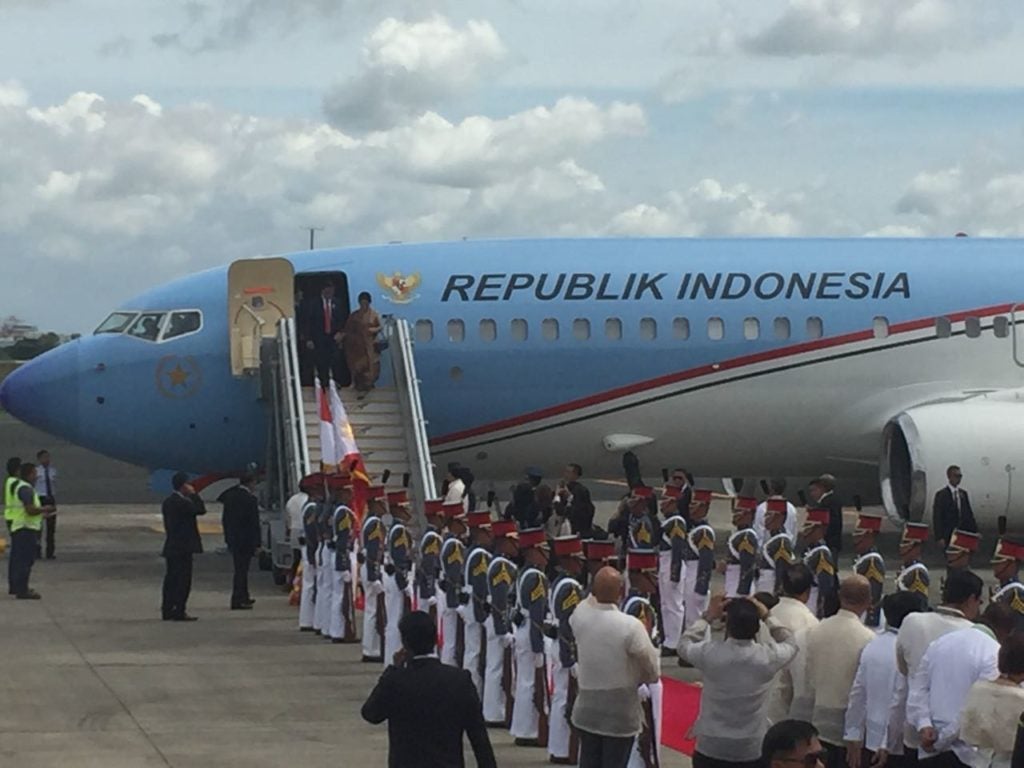 Indonesian President Joko Widodo steps down from a government airplane after arriving at the Clark International Airport on Sunday, Nov. 12, 2017. Widodo and 20 other world leaders are expected to attend the Asean Summit and other related summits in Manila. INQUIRER.NET / FRANCES MANGOSING

He was welcomed by Agriculture Secretary Manny Piñol and other officials after he got off an Indonesian government plane.

All world leaders arriving in Clark Airport like Widodo were welcomed with a traditional dance performance by hundreds of students from Pampanga and Bulacan.

Widodo was also in the Philippines last April for the Asean. He later joined President Rodrigo Duterte for the launch of the Asean roll-on/roll-off (RoRo) service in Davao City.

The ferry service, plying Davao City and General Santos, was meant to connect Mindanao to Bitung and Manado in Indonesia.

Among the topics during the bilateral meetings of Widodo and Duterte last April was the case of convicted drug mule Mary Jane Veloso, a Filipina domestic worker on death row in Indonesia.

Veloso was arrested at the Yogyakarta airport in 2010 after being caught in possession of 2.6 kilos of heroin.

She was given a death sentence in the same year for drug trafficking, but her execution was postponed at the last minute after her alleged recruiter surrendered to authorities. The Philippine government said her testimony would be vital against her recruiters. /cbb

Read Next
Free trade talks assessed amid Asean rites
EDITORS' PICK
Is it safe to talk politics again at family gatherings? ‘The Reconciliation Dinner’ shows us what that’s like
vivo’s coming to town to grant wishes with more holiday promos
Pagasa: Warm, sunny Sunday in most parts of PH
House energy committee chair Arroyo bats for cheap electricity
EDITORIAL: To a bike-friendly future
The Best Tech Gifts For The 2022 Holidays
MOST READ
LOOK: Vhong Navarro transferred to BJMP detention facility in Taguig
The Elephant Man in the Senate
Posh village as ‘shabu’ haven
LOOK: Zanjoe Marudo bonds with Ria Atayde, her family
Don't miss out on the latest news and information.