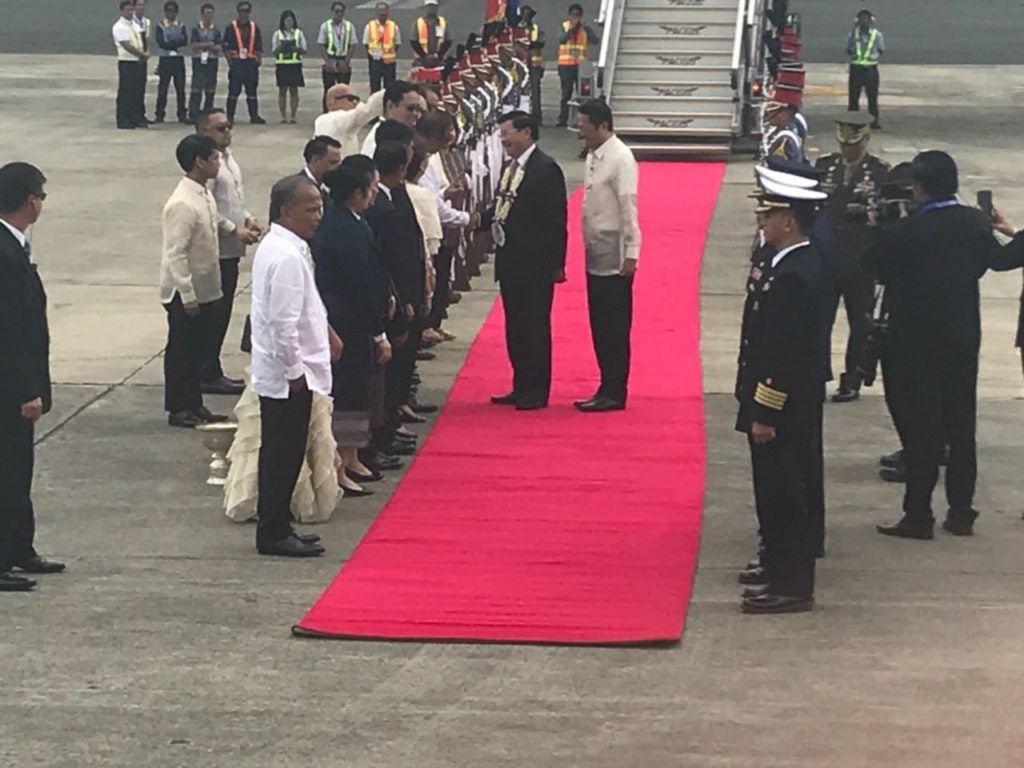 Lao Prime Minister Thongloun Sisoulith (left, on red carpet) talks to a member of the welcoming party that greeted him at the Clark International Airport on Sunday, Nov. 12, 2017. Sisoulith returned to Manila for the 31st Asean Summit and Related Summits. INQUIRER.NET / JHOANNA BALLARAN

The Laotian plane carrying Sisoulith landed at 10:37 a.m. at the Clark International Airport.

Sisoulith, the third leader to arrive for the Summit, was welcomed by 2,000 school children in Filipiniana costume dancing to traditional music.

The PM is set to meet President Rodrigo Duterte and other Asean leaders and its dialogue partners in the next three days in different venues in Manila.

Sisoulith met Duterte in the past two Asean Summits — last April in Manila and September in Vientiane, Laos.

Prior to his appointment as prime minister in 2016, Sisoulith served as the deputy prime minister and minister of foreign affairs. He is a member of the politburo or the executive committee of the Lao People’s Revolutionary Party, ranking third.

Together with Myanmar, Lao PDR joined the Asean bloc on July 23, 1997. It is one of the smallest countries in the region in terms of population, with 6,758,353 people, next to Singapore and Brunei.

While the country recorded the highest gross domestic product (GDP) growth rate in the region with 7.3 percent in 2016, Laos has posted the least GDP with US$15.9 billion and its GDP per capita remained at the lower half of the region with US$2,353.2.

Lao PDR is one of the only two socialist states in the region, together with Vietnam. /cbb