Duterte tells Putin: ‘We will remember you for all time’ | Global News

Duterte tells Putin: ‘We will remember you for all time’ 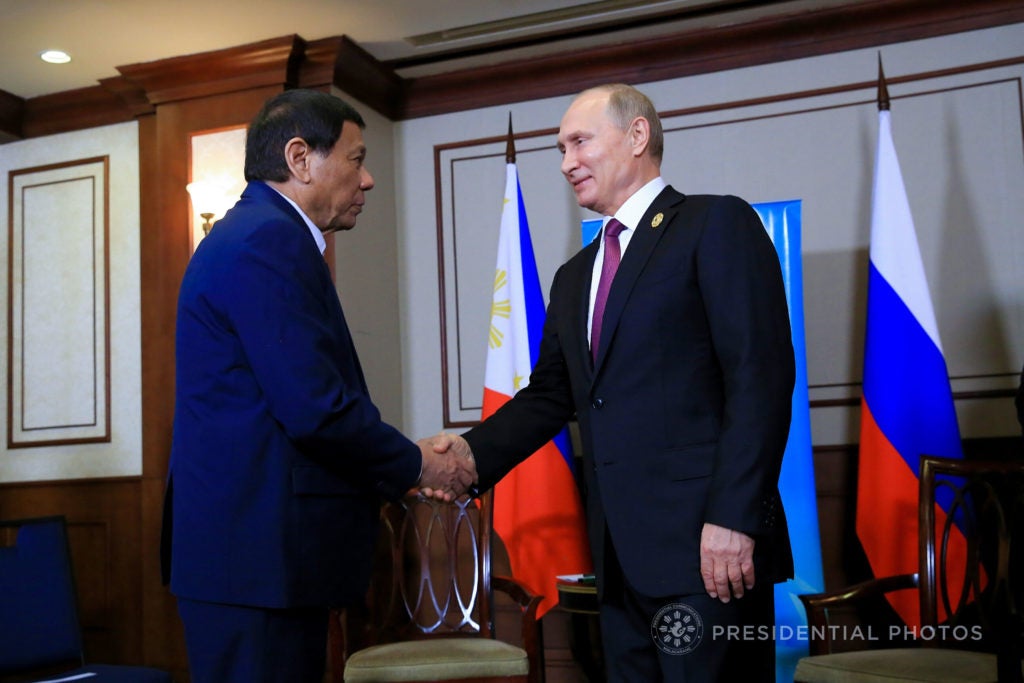 President Duterte greets Russian President Vladimir Putin prior to the start of their bilateral meeting at the Vinpearl Da Nang Resort and Villas in Da Nang City, Vietnam on November 10, 2017. ALBERT ALCAIN/PRESIDENTIAL PHOTO

President Rodrigo Duterte on Friday met with Russian President Vladimir Putin at the sidelines of the Asia-Pacific Economic Cooperation (Apec) in Vietnam.

“I’m very happy to see you again. This time double the enthusiasm and gratitude of my country the Philippines,’ Duterte told Putin during their bilateral meeting.

It was their third meeting after the two leaders first met in Peru in November 2016 and in Russia last May.

Duterte had to cut short his trip to Russia last May after he had to go back to the Philippines following his declaration of martial law in Mindanao.

During their meeting in Vietnam, Duterte thanked Putin for his assistance to the Philippines.

“I would like to convey to you the gratitude of the Filipino people for your timely assistance, especially the trucks and the arms that you sent,” Duterte said.

On October 25, the Armed Forces of the Philippines (AFP) received thousands of assault rifles, 20 military trucks, bullets and helmets donated by the Russian government to the Philippines, which would be used in the country’s fight against terrorism.

Duterte told Putin it was his dream to build a strong arm forces and a strong police before his term ends.

“Your timely assistance to my country helped us replenish the old arms and the spent bores that were fired repeatedly and we have a new stock,” he said.

“In a way, you helped us turn the tide and to shorten the war there because of your assistance. So again, I thank you very much, the Russian people, and you, Mr. President. We will remember you for all time,” he added.

For his part, Putin hailed Duterte for quelling the rebellion in Marawi City, saying terrorism is a common challenge for both Russia and the Philippines.

“I would like to say that terrorism is one of our common problem and common challenge and following our agreement, we are ready to keep developing our relations, including in the military area and the tactical area,” he said.

He said that he wanted to see an improvement in the economic relations between the Philippines and Russia.

“I have no doubt, special attention should be paid to our economic ties,” he said.