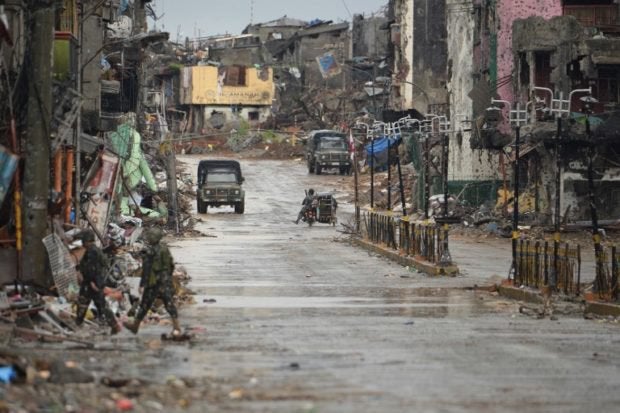 This photo taken on October 17, 2017 shows Philippine soldiers on a street flanked by destroyed buildings in Marawi on the southern island of Mindanao.
At first glance, the endless rows of devastated buildings could be the aftermath of a great earthquake. But the punctured, bullet-riddled walls tell the true story of the Philippines’ longest urban war. / AFP PHOTO / TED ALJIBE / TO GO WITH AFP STORY PHILIPPINES-UNREST-CONFLICT,FOCUS BY CECIL MORELLA

Weeks after it declared the war-torn Marawi City free from Islamic State-inspired fighters, the Philippines is set to brief the members of the Association of Southeast Asian Nations (Asean) and its dialogue partners on issues of terrorism, the Department of Foreign Affairs (DFA) said Friday.

DFA spokesperson Robespierre Bolivar said the country would raise the issue of the persistent threat of terrorism and radicalization during the 31st Asean Summit and Related Summits on Nov. 12 to 14.

“Definitely the Philippines will be raising the issue of cooperating against terrorism, cooperation against radicalization in several of these summits, Asean and the Plus Ones, and maybe even the [United Nations], because that is a common interest of all countries,” Bolivar said in a press briefing in Manila.

More than week before the liberation of Marawi City, agents of the National Bureau of Investigation (NBI) arrested Karen Aizha Hamidon, a woman who allegedly used social media and other messaging apps to propagate extremism and recruit IS fighters.

The Department of Justice has wrapped up on Tuesday its preliminary investigation on the rebellion or inciting to rebellion complaint filed by the NBI against Hamidon.

Martial law remains in effect in Mindanao despite the ceasing of combat operations and will only be lifted until “the last terrorist is taken out” of the region, President Rodrigo Duterte said.