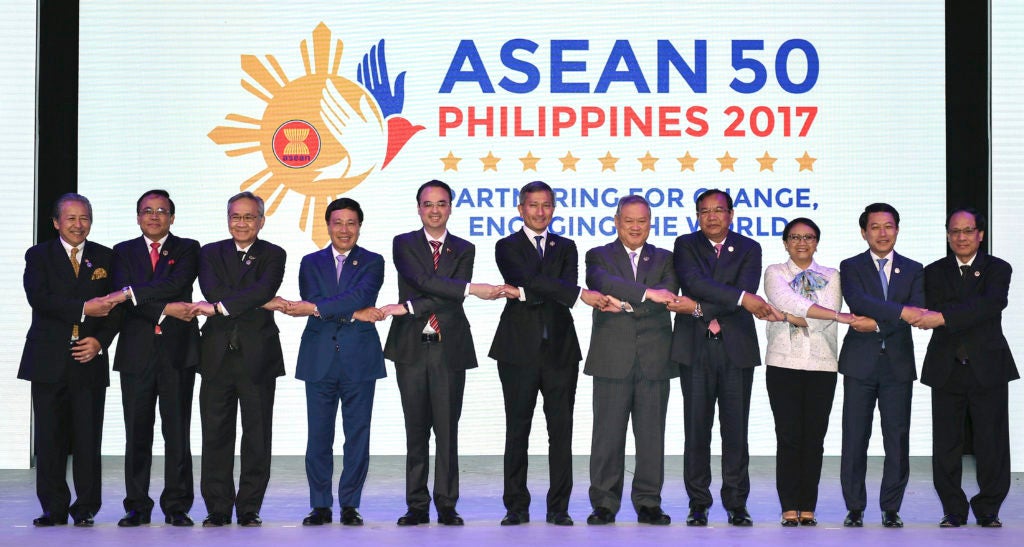 On the 50th year of the Association of Southeast Asian Nations (Asean), the 10-member bloc puts forward the agenda of inclusive growth and regional security.

With the Philippines as the chair and host of the Asean summit, the Asean’s thrust combatting poverty and terrorism had been highlighted by the leaders in the previous meetings.

Emphasizing that eradicating poverty and quelling insurgency are intertwined, the Asean, which is home to at least 622 million people, vowed to work so the fruits of the region’s economic growth will also be felt in the grassroots, as this would prevent the poor from resorting to terror acts.

“Prosperity for all” is Asean’s battle-cry in this year’s summit. Supporting the micro, small and medium enterprises (MSMEs) in a bid to reduce development gaps was among the Asean’s economic community’s promises.

On the issue of maritime dispute over the West Philippine Sea, the Asean had a “more balanced” stance compared in the past meetings.

Philippine Department of Foreign Affairs (DFA) Secretary Alan Peter Cayetano said the “land reclamations” and “militarization” made by China were dropped in the Asean’s joint communique as these were “not reflective of the Asean’s position.”

Last week, the defense leaders from different Asean member states met in Clark, Pampanga ahead of the summit and meetings in November.

From November 12 to 14, Asean leaders will hold different meetings, including those with partner countries United States, China, Republic of Korea, Canada and Japan.

The government has allotted P17 billion budget for the Philippines’ hosting of the Asean.

During the Senate budget hearing last year, Secretary Benjamin Diokno said the bulk of the budget will be used for the car rentals which will be used to ferry visiting foreign dignitaries.

The P2 billion was dedicated for the security expenses handled by the Department of the Interior and Local Government.

The Presidential Communications Operations Office (PCOO) also got P1.5 billion for the event.

The DFA, which spearheads the management of the Asean events, will use portion of the agency’s P16.5 billion budget for the Asean. /je