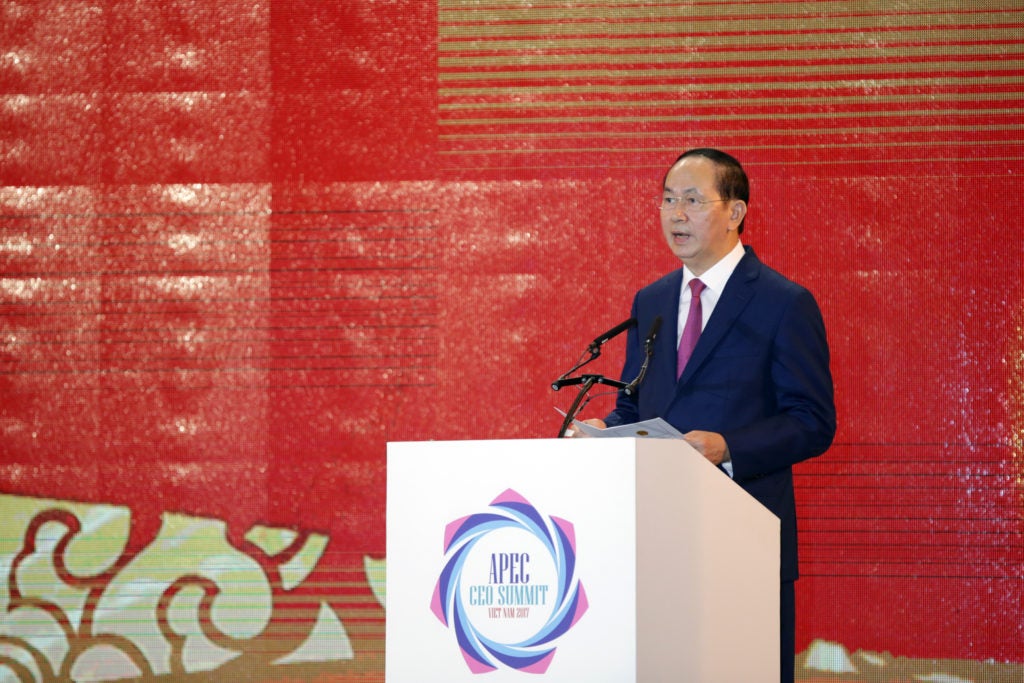 He praised the community for being crucial contributor to the bloc becoming a driving force behind global growth and integration.

The APEC business community has taken the lead in developing new technologies and energy sources as well as new forms of investment and commercialisation, bringing prosperity and improving the people’s living standards, he said.

Addressing some 2,000 top regional business leaders attending the three-day 2017 APEC CEO Summit in Da Nang City, he also spoke highly of their contribution to regional cohesion that has made many significant achievements possible.

“As the top regional economic co-operation mechanism, APEC has achieved important socio-economic progress, bringing hundreds of millions people out of poverty. It has proven to be the most important co-operation mechanism, making the Asia Pacific region the driving force behind global growth and integration, and a ground for new ideas for the future,” the President said.

“Thanks to crucial contributions from top global business to micro small, small and medium sized enterprises [MSMEs] and those led by women, the Asia Pacific region accounts for 50 per cent of total trade and nearly 60 per cent of global GDP,” he noted.

After nearly three decades of growth, not only has APEC witnessed many fundamental changes in the world, it has itself been part of these changes, he said.

“Nearly 10 years after the last global economic crisis, world economic growth has stabilised, but there are hidden mid-term and long-term risks,” he said.

“Our region still has millions living in poverty, and many are suffering from never before seen impacts of climate change and natural disaster.”

He urged the APEC business community to continue playing an important role in solving these urgent issues, with top priority given to maintaining the pace of global economic co-operation and revitalisation.

The community should further pioneering open trade and investment, facilitate he completion of Bogor goals in 2020, push private and public co-operation, and improve investment and trade value chain linkages, he said.

Describing the summit as a “largest scale” event for the regional business community, President Quang said he believes this year’s meeting will open new doors to co-operation and development.

Vu Tien Loc, Chairman and President of the Vietnam Chamber of Commerce and Industry (VCCI), the event’s host, meanwhile, called the summit a meeting of “giants” and think-tanks.

“The summit welcomes President Tran Dai Quang, US President Donald Trump, Chinese President Xi Jinping, together with leaders from APEC member economies who account for 60 per cent of the world’s GDP,” Loc said.

“It is expected that the visions of these leaders will determine the future path of APEC and the world,” Loc said.

The future of globalisation, threats and opportunities of automation and the outlook for APEC are among major topics that will be discussed across 15 or so sessions during the three-day summit.

In “The Future and Globalisation” session, Morits mentioned the results of a PwC survey showing 75 per cent of the CEOs around the world were interested in investing and doing business in the APEC region, maintaining its status as a global growth hub.

The risks posed to jobs by automation was highlighted in the “The Future of Work” session by Masamichi Kono, Deputy Secretary General of the Organisation for Economic Co-operation and Development (OECD).

He said 14 per cent of all jobs have high a risk of being automated and an additional 35 per cent of jobs are at some risk of having parts or most of their tasks done by machines.

However, Nicolas Aguzin, Chairman and CEO of JP Morgan Asia Pacific, said that all the jobs that are automated will be replaced with new jobs.

“And though we have yet to know where these jobs will come from, we believe that the amount of employment resulting from technological development will definitely go up,” he said.

“Foreign brands outsourcing in Vietnam demand a production rate that is 25 per cent higher. This is an opportunity for more than 500 leather footwear producers in the country to recognise the problem and find a way to improve productivity by applying new technology, especially autonomous production lines,” Thuan said.

In the final session, Maria Ressa, CEO of Rappler, an online news site based in the Philippines, spoke about the social media being a “game changer” in many areas including business.

US President Donald Trump and Chinese President Xi Jinping will deliver the keynote addresses on Friday, the last day of the summit.