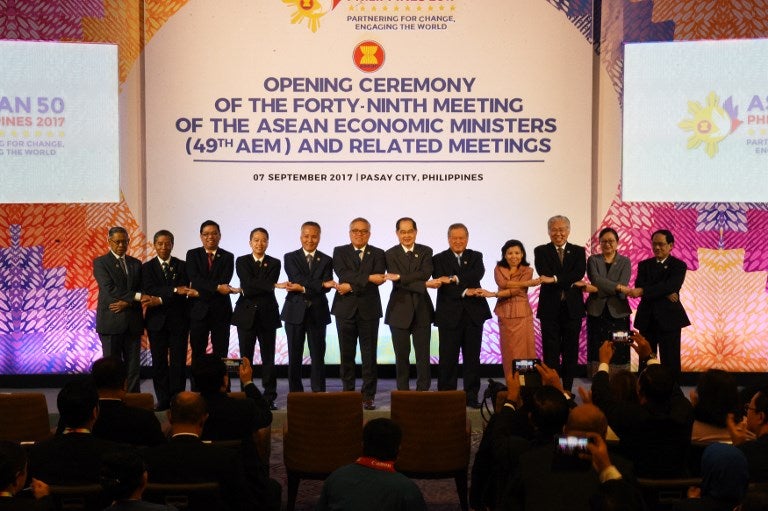 Moving beyond 50 years of existence, the Association of Southeast Asian Nations is strengthening its relations with South Korea for a mutually profitable future, said the chair of the Asean Committee in Seoul, presenting the Asean market as a competitive and trustworthy alternative to China.

Cambodian Ambassador to Korea Long Dimanche, who chairs the committee comprising 10 Asean ambassadors, told The Korea Herald that Asean is playing an increasingly hefty role on the world stage on the back of the Asean Economic Community launched on Dec. 31, 2015.

“As a post-China market and stable destination promoting mutually beneficial ties, Asean is Korea’s best choice,” the envoy said in an exclusive interview at the Cambodian Embassy in Seoul on Oct. 31. “Since establishing itself in 1967, Asean has continued to expand and enhance its external relations through consultation, cooperation and partnerships with third countries, including Korea.”

An outcome of the 1967 Bangkok Declaration, Asean was initially established as a bloc of Southeast Asian nations Indonesia, Malaysia, the Philippines, Singapore and Thailand. It later expanded to incorporate Brunei, Cambodia, Laos, Myanmar and Vietnam. Its economy is the sixth-largest in the world with a combined gross domestic product of $2.6 trillion last year and 670 million people.

The administration of Korean President Moon Jae-in sent as its first envoy to Asean Seoul Mayor Park Won-soon in June as a sign of its commitment to the dynamically growing region, with the two sides expected to reach $200 billion in bilateral trade by 2020.

Pointing to Asean’s young and abundant labor force — third-largest in the world after China and India — the envoy highlighted that its integrated economy is reaping population dividends and over 60 percent of growth since 1990 has come from productivity gains in manufacturing, retail, telecommunications and logistics, among others.

The ambassador also pointed out that Japanese firms have increasingly traded with and invested in Asean following rising labor costs, anti-Japanese sentiments and growing investment risks in China in part fueled by Beijing’s economic retaliation over territorial disputes in and around the Senkaku, or Diaoyu, islands and Japan’s detention of a Chinese fishing trawler captain in 2010. Beijing halted shipments of rare earth minerals — key elements used in the production of solar cells, cellphones, computer chips, hybrid cars, wind turbines, guided missiles and more — to Japan for a period starting in 2010.

“These factors have contributed to the strategic shift of Japanese investments toward other low-cost manufacturing destinations in Southeast Asia, such as Vietnam, Cambodia, Indonesia and the Philippines, as well as other manufacturing hubs in emerging markets India, Brazil and Mexico,” noted the diplomat.

Dimanche highlighted that Asean is looked upon as one of the most successful models of regional integration — despite wide differences in the political system, economic development, culture, history and religion — and playing a key role in shaping regional and global agenda for peace and prosperity. The Asean Economic Community Blueprint for 2025 provides broad directions and strategies for greater integration encompassing political-security, economic and socio-cultural communities.

With the help of the Asian Development Bank and other development partners, the scheme has implemented infrastructure projects for regional roads, airports, railways, hydropower dams, tourism and disease prevention centers, as well as agriculture, environmental protection, public health, telecommunications and information technology.

“Celebrating its 25th anniversary, the GMS program continues its long-term development for an integrated, harmonious and prosperous subregion in line with the Hanoi Action Plan 2018-2022 and GMS Regional Investment Framework 2022, consisting of 222 investment and technical assistance projects with a combined value of $64 billion,” the ambassador said.

“The potential benefits from this cooperation are huge. However, possible problems emanating from different levels of development and relative lack of political stability in some countries may slow down the progress and hinder full benefits.”

The GMS explores synergies with the Asean Economic Community, Asean Plus Three as well as other regional initiatives, such as the China-led One Belt One Road initiative, he added.

The Asean Committee in Seoul was established in 1990 and is tasked with bolstering two-way ties through sharing of information, advancing Asean’s interests here and facilitating consultation with the Korean government. The committee often works with the Asean-Korea Center, which was established in 2009 as an intergovernmental organization dedicated to shoring up bilateral trade and investment, cultural and academic exchanges and tourism.

This year has been designated the Asean-Korea Cultural Exchange Year, with a long list of programs and events set for both sides. Korea instituted the Asean Culture House in Busan on Sept. 1as a platform for educating the public on Asean’s diverse and unique cultures.