Indonesia to coordinate with Philippines on arrested terrorists | Global News

Indonesia to coordinate with Philippines on arrested terrorists 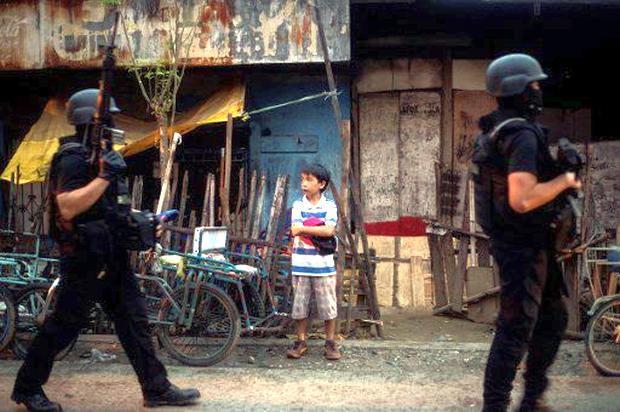 Members of a Special Weapons and Tactics (SWAT) team patrol a neighborhood where evacuees from Marawi City are temporarily living in Iligan City on June 16. Fighting between Islamist militants and government forces began on May 23, when hundreds of militants rampaged through Marawi, the most important Muslim city in the mainly Catholic Philippines, waving the black flags of the Islamic State (IS) group. (Photo by NOEL CELIS / AFP)

Representatives of the National Police’s Densus 88 counterterrorism squad are set to depart for the Philippines on Tuesday to coordinate with their counterparts at the Philippine National Police (PNP) over Indonesians arrested for their alleged involvement with a Maute terrorist group in Marawi.

“We will see how far and what their roles are in the terrorist activities in Marawi,” National Police spokesperson Insp. Gen. Setyo Wasisto told journalists on Monday.

Last Wednesday, an Indonesian citizen, identified as Muhammad Ilham Syahputra, 22, from North Sumatra, was arrested by members of the Barangay Peacekeeping Action Team in Loksadatu in Marawi. He was accused of having become a member of the Maute terrorist group.

On Sunday, the Philippine National Police arrested seven other Indonesian citizens in Iligan City, the Philippines. They were believed to be Omarkhayyam Maute’s wife and their six children.

Omarkhayyam is one of Maute’s leaders. On Oct. 16, Philippines President Rodrigo Duterte announced that Omarkhayyam and fellow Maute leader, Hapilon, were killed in a shootout in Marawi.

His wife, identified as Minhati Madrais, and their six children – four girls and two boys – have been detained and are being questioned at the Iligan City police station in the Philippines.

Setyo said it was hard to know how many Indonesians lived in Marawi because most of them had gone there illegally to join militant groups in the city. “Even if they go there legally, they will not say that they went to Marawi,” he said.