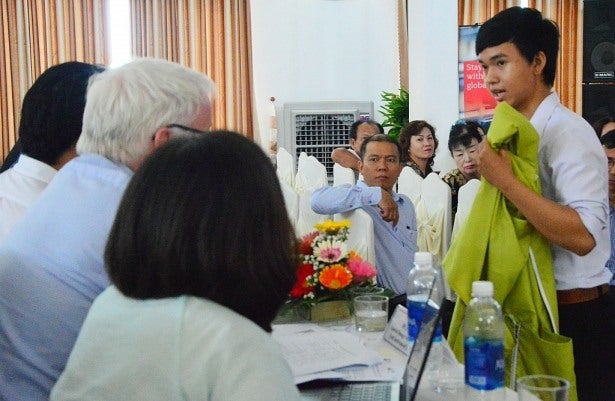 Thuan and his five-member team (C-TEK team), comprised of friends and fellow students at his city’s Economics College, began manufacturing the jacket with domestic material and design this March. The jacket won first prize at the Da Nang Startup Runway 2017, with the award of a four-week training course at Ireland’s Cork Institute of Technology.

Thuan, a third-year student in the commerce faculty of the Da Nang Economics College, was the only representative of Da Nang and one of 17 Vietnamese young people participating in the 2017 Apec Voices of the Future – a forum for youths from Apec’s 21 economies – in Da Nang city on November 6-11th.

“It’s a great honor for me representing Da Nang at Apec in my home town. Our team, three members from our college and two others of Duy Tan and Architect Colleges in Da Nang, took three months to debut the SleepJ for competition at the Da Nang Startup Runway 2017,” Thuan told the Việt Nam News at the sidelines of the Apec Voices of the Future.

“I and Ly Thu Uyen spent time designing and cutting the cloth, while others worked on different sections of the jacket,” he said.

The Da Nang-born student said devising a design to contain the other functions of the jacket was especially time-consuming.

He said adventure-seekers traveling on motorbikes often take tents, sleeping bags and packs with them for long trips. Carrying heavy luggage on their bikes is inconvenient.

The first sample of the SleepJ, which costs around VND500,000 (US$22) and is made with local material, is quite reasonable for off-road trippers, but it may be expensive to poor people living in remote mountainous areas and flood-vulnerable villages.

“We witnessed residents suffering from homelessness and a lack of facilities when their homes were washed away by floods during the rainy and storm season in central Vietnam. That tragedy urged us to make the cheaper SleepJ for disaster victims,” Thuan said.

“And the Apec Voices of the Future is a great opportunity for us to exchange ideas with investors about mass producing multi-purpose jackets for poor people in the disaster-stricken areas in Vietnam and other countries,” he said.

Uyen, a member of the C-TEK team, who did not join the Apec event, said the SleepJ is very convenient for backpackers, homeless people, night ship workers and flood affected residents.

Currently, the C-TEK team has been embedding a small anti-mosquito device into the jacket and other products on the base of the SleepJ.

The programme aims at creating opportunities for young students to practice English communication, while promoting the hospitality of Da Nang and central Vietnam to tourists.

Statistics from the National Tourism Administration of Vietnam revealed that backpacker and off-road trippers accounted for 18.4 per cent of revenue from the country’s tourism.

Thuan hopes the Apec Voices of the Future event will help his product grow, and he is excited that Da Nang has launched its own business incubator campaign for young people seeking chances to develop ideas into entrepreneurial products.

His said the SleepJ has just been completed as a prototype, and it needs more work before it can be sold in Vietnam and foreign markets.