Donald Trump goes to Asia: What to look out for | Global News
Close
menu
search

Donald Trump goes to Asia: What to look out for 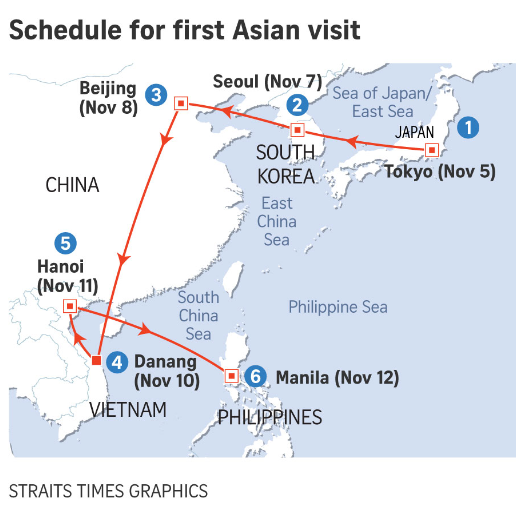 US President Donald Trump will make his maiden visit to Asia from Nov. 3 to 14, making stops in Japan, South Korea, China, Vietnam and the Philippines.

Besides meeting the countries’ leaders, Trump will also attend the Apec summit in Da Nang, Vietnam, and Asean events in Manila, the Philippines.

The Straits Times’ foreign correspondents give a heads up on what to look out for, in each leg of Trump’s visit to Asia.

1. What is Trump’s true stance on Pyongyang?

Fire and fury, or return to talks? South Koreans will listen closely when  Trump delivers a speech in South Korea’s Parliament on Nov 8.

Trump and his South Korean counterpart Moon Jae In will hold their third summit to date on Nov 7. Observers will watch out for potential cracks in their united front against the North, and if the two sides can iron out differences in issues like the transfer of wartime operational control of troops in South Korea from the US to Seoul, which  Moon has pushed for.

During his two-day stay,  Trump is expected to visit Camp Humphreys, a new major US base in Pyeongtaek, a port city 70km south of Seoul. Experts said South Korea will be eager to show its significant contribution to their defense burden-sharing deal and ease pressure from the American leader to pay more. South Korea now pays half of the bill, or about US$830 million (S$1.13 billion), to keep some 28,000 American troops in the country.

4. Will North Korea spoil the party?

Pyongyang has been unusually quiet in recent weeks, after firing a missile on Sept 15 that flew over Japan. Analysts say North Korea will be monitoring Trump’s visit while waiting for the right timing to launch its next provocation.

The Chinese expect to face pressure from US President Donald Trump to rein in North Korea’s nuclear and missile programmes, but are unlikely to yield much to the Americans.

2. Give and take over trade

The Chinese will try and make more concessions to reduce the trade deficit between the two countries, in part to reduce US pressure on them to do more on North Korea.

Vietnamese analysts hope Trump will make a statement underlining the US commitment to the region.

2. Vietnam the first off the blocks

Through strong lobbying, Vietnamese premier Nguyen Xuan Phuc became the first Asean leader to visit the White House, in May 2017.

Vietnam’s hopes of an economic fillip through the Trans Pacific Partnership were deflated when Trump pulled the United States out of the trading agreement. But bilateral security cooperation has kept steady. In May 2017, the US government transferred to the Vietnamese coast guard six patrol boats and a high endurance cutter, a large vessel that can be used for ocean patrols.

1. Give the assurance that Southeast Asia matters to the US

Trump has to reaffirm US commitments as an Asia-Pacific power, amid China’s rising influence in the region.

2. Spell out his intentions

Trump is expected to outline a more detailed security and economic policy to assuage concerns arising from his decision to opt out of the Trans-Pacific Partnership pact and his lack of interest in disputes over the South China Sea.

3. Rally Southeast Asia behind US efforts to rein in North Korea’s nuclear ambitions

Trump is expected to press Asean states to step up efforts to combat evolving threats from the Islamic State in Iraq and Syria.

He will likely support  Duterte’s anti-crime drive, but avoid mentioning the thousands of criminal suspects killed in its wake.

All has been quiet on the North Korean front since it sent a ballistic missile flying over Japan in September, and observers are on the lookout for signs of a potential provocation with Trump in the neighbourhood. Trump and Japanese Prime Minister Shinzo Abe have been in lockstep over tightening the noose on the North through economic sanctions to make it renounce its missile and nuclear development programmes, and the duo will likely again discuss the issue.

Trump surprised Japan in September when he referred to North Korea’s systematic kidnapping of Japanese citizens in the 1970s to 1980s in a speech to the United Nations General Assembly. Japan has been lobbying for the return of its citizens, and Trump is scheduled to meet their next-of-kin.

Amid increasing Chinese assertiveness in the seas, Abe hopes to win  Trump’s backing for Tokyo’s “Free and Open Indo-Pacific Strategy” to ensure smooth navigation. The US has held four freedom of navigation operations in five months in the South China Sea, after a seven-month hiatus, in a sign of its commitment to the region. Japan is embroiled in a territorial dispute with China over a group of islets in the East China Sea that Tokyo calls the Senkakus and Beijing terms the Diaoyus. The US has said that its security treaty with Japan covers the islands.

The one issue that  Trump and  Abe do not see eye to eye on – trade – will likely not feature high on the agenda though it is still expected to be discussed. Trump favours bilateral trade deals while Abe champions multilateral frameworks such as the Trans-Pacific Partnership pact which the US has pulled out of. They have been inclined to leave the issue to their deputies, who met in Washington in October.

Abe is expected to make a push for the US to adopt its shinkansen high-speed rail technology, as well as pursue other areas of collaboration such as autonomous driving and next-generation computers for the development of artificial intelligence.