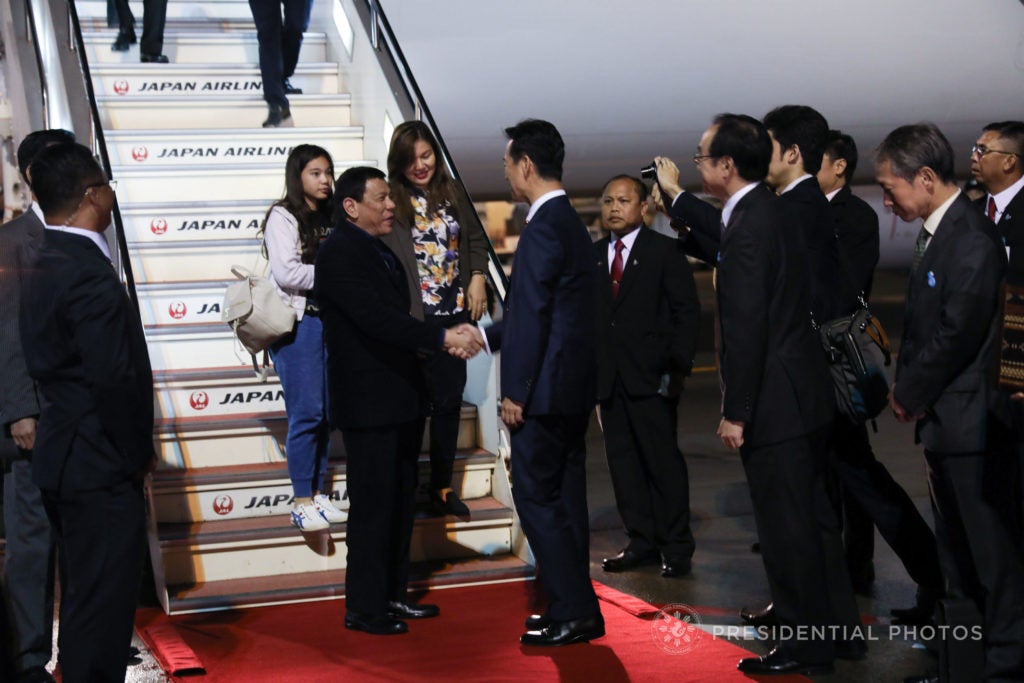 President Duterte is welcomed by Japanese officials on his arrival in Tokyo on Monday. Presidential photo

TOKYO— President Duterte declared that the Philippines and Japan are embarking on their “golden age of strategic partnership,” as Prime Minister Shinzo Abe promised maximum support for Marawi rehabilitation and fleshed out the details of the 1 trillion yen aid package he promised the Philippines back in January.

With the two countries deepening their cooperation on economic and security matters, Mr. Duterte said they were resolved to further expand their cooperative ties.

“I daresay that considering all that we have accomplished and achieved, the Philippines and Japan are building the golden age of our strategic partnership,” Mr. Duterte said as he issued a joint statement with Abe.

“It’s a commitment founded on the democratic values we hold dear. It’s a resolve that has withstood the test of time. Working together, we should have much to show and to be proud of in the years to come,” he added.

He thanked Abe for fleshing out the $9 billion he had pledged for the Philippines, which would go to “some of the most ambitious and groundbreaking projects” including the Metro Manila subway system and the improvement of roads and disaster response.

Mr. Duterte visited Abe’s official residence on Monday afternoon, where he was given arrival honors. The two leaders held a summit meeting followed by a tete a tete.

Abe congratulated Mr. Duterte for the leadership he exerted in addressing the Marawi conflict and declared full support for the Philippine President’s approaches toward fighting terrorism and bringing stability to Mindanao.

“We will provide maximum support to the restoration and reconstruction of Marawi City, and we will strengthen support for Mindanao, and toward the establishment of an autonomous government, we will respond to the progress of processes,” he said.

Japan will provide equipment for the devastated city’s and surrounding areas’ reconstruction and rehabilitation.

It would consider providing further assistance, including those for road construction and improvement, based on post-conflict needs assessment and the government’s masterplan for reconstruction. It would also consult with the government on building a society resilient to radicalism.

Given Abe’s support for Philippine efforts to fight terrorism and violent extremism in Marawi and his understanding of the cancellation of his Japan trip in June, Mr. Duterte said it was fitting that his first official visit after Marawi’s liberation is to Japan.

The Philippine President described Japan as “a true friend who has stood squarely behind the Philippines in my country’s onward advance [to] greater peace, progress and prosperity.”

His and Abe’s discussions were “very warm, open and comprehensive,” he said.

The two leaders agreed to increase economic activities, and Mr. Duterte welcomed Japan’s growing number of investments in the Philippines, adding that the country was ready to work with responsible companies which we consider our new partners for growth.

He also said he was looking forward to meeting Emperor Akihito and Empress Michiko and thanked them for their kindness and compassion when they visited the Philippines last year during the 60th anniversary of the normalization of Philippine-Japan diplomatic relations.

“I am eager to convey my deep respect and admiration [to] His Majesty,” he said.

He is scheduled to visit the Imperial Palace today (Tuesday).

Mr. Duterte is the first head of state to visit Abe after his victory in the recent snap elections.

The two have attested to their close friendship. Abe, during his visit to the Philippines last January, flew to Mr. Duterte’s Davao hometown and even visited his home there.

Abe, during his Manila visit, had also described the relationship between the Philippines and Japan as “deep, warm and brotherly or family-like relationship.”