Malaysia concerned about return of militants from Raqqa | Global News

Malaysia concerned about return of militants from Raqqa 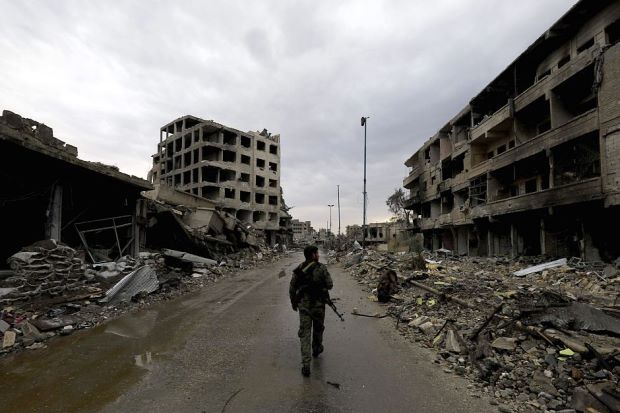 Ghost town: A Syrian Democratic Forces (SDF) fighter walking through an empty rubble-filled street in Raqqa. The US-backed SDF has taken full control of Raqqa after battling Islamic State militants for months. The IS militants are on the run and may head to the South-East Asian region. THE STAR

“Forget about Marawi City, it is over. You must look at Raqqa. That war is over. Where are the Malaysian militants going and where are they?” a Malaysian intelligence officer asked.

On Oct 17., after a four-month battle, the US-backed alliance of Syrian Kurdish and Arab fighters said they had taken full control of Raqqa, the de facto capital of IS’ so-called caliphate.

Deputy Home Minister Datuk Nur Jazlan Mohamed said Malaysia knows that IS fighters had been fleeing Iraq and Syria for some time.

“They have been looking for a safe haven to regroup and rebuild their capabilities to set up Islamic states in other parts of the world and SEA, especially Malaysia, Indonesia and the Philippines are attractive targets because of a large and potentially sympathetic Muslim population,” he said.

Nur Jazlan said the return of such fighters with battlefield training and weapons handling experience presents a dangerous and difficult challenge to our counter-terrorism (CT) units strategically and tactically.

“They may be inspirational to new recruits and are able to organize new attacks. The additional challenge for the CT units is to locate where they are, prevent their reorganization in this region, deny access to heavy and mass destruction weapons and anticipate the location and timing of future attacks,” he said.

If the Malaysian militants flee Syria, they are unlikely to directly head home, an intelligence officer said.“They will either go to Pakistan or Thailand and head into Indonesia. Then, they may take a boat to sneak into Malaysia via the backdoor and probably report a lost identity card to get back their identity card,” he said, adding there are Malaysians who went to Syria and Iraq who might be unknown to the police.These people can be dangerous if they return. They have been used to fighting, so they might create trouble. They may want to get involved in any local issue just to continue their killings. Their mindset is different from before they left Malaysia. They could be trigger-happy,” he said.

Zachary Abuza, an expert on Southeast Asian politics and security at the US National War College, said there was still IS-controlled territory in Syria and Iraq, where many IS militants would continue to fight.

“Some will try to escape, but there are few ways out that are amenable to them. My guess is that most Malaysians and Southeast Asians there will continue fighting,” he said.

Dr. Maszlee said that even after the collapse of Raqqa, the notion of Islamic State still exists.

“They are going to remain there to fight until their last breath. IS territory is not only Raqqa and Mosul. The distance between the two is very vast.These people can go anywhere in between to live with the Bedouins and other Arab tribes who live in those places between Iraq and Syria,” he said.

Zachary said if the militants returned home, most likely via Turkey, they could be caught.

“I would be more concerned about them trying to get to places like Mindanao which is a more permissive environment. Malaysia has arrested many suspected militants who have tried to return. Bad odds,” he said. But those who do slip through have military training, hardened ideology, and the pedestal of having fought alongside IS militants,” he said.

Zachary said he was more concerned about lone wolves, or those who stay in the region and go to Mindanao or other battlefields.

“Those guys are harder to track. Local borders are far more porous. The number of Southeast Asians who went to Iraq and Syria was never that large, mainly because the logistical challenges of getting there. That is not true within Southeast Asia,” he said.

Nur Jazlan said Malaysian and other foreign terrorist elements had been making their way here to Southeast Asia.

“We have been tracking them through intelligence exchanges with domestic, regional and global enforcement agencies, we will immediately detain them under the relevant laws if they land or cross into Malaysian territory,” he said.