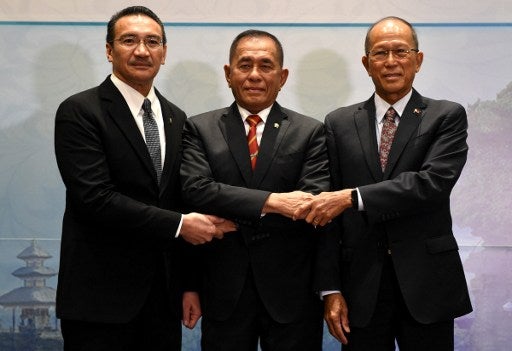 CLARK FREEPORT — Singapore and Brunei may soon join the trilateral air and sea patrols of Philippines, Malaysia and Indonesia along its borders aimed to curb the influence of terrorist groups like ISIS.

“I’ve spoken to the minister of Singapore, they will come on board formally. So the trilateral patrols will become four nations. I will have to get further feedback from Brunei because they were also observers from our launch so we’re building in a constructive way,” Malaysian defense minister Dato’ Seri Hishammuddin bin Tun Hussein told reporters on the sidelines of the regional security forum held here.

The Philippines, Malaysia and Indonesia launched trilateral air and sea patrols on separate occasions this year as a response to the threat of Islamic State fighters to use the Sulu Sea for their movements.

The waterway had also been facing challenges of smuggling, marine protection, and other transnational crimes.

The Philippine government on Monday officially terminated the combat operations in Marawi City, where gunbattle between government forces and IS-linked terrorists took place for five months.

“These things will take time. Both countries were with us as observers so let our officers and military discuss how they will come on board,” he said. /je