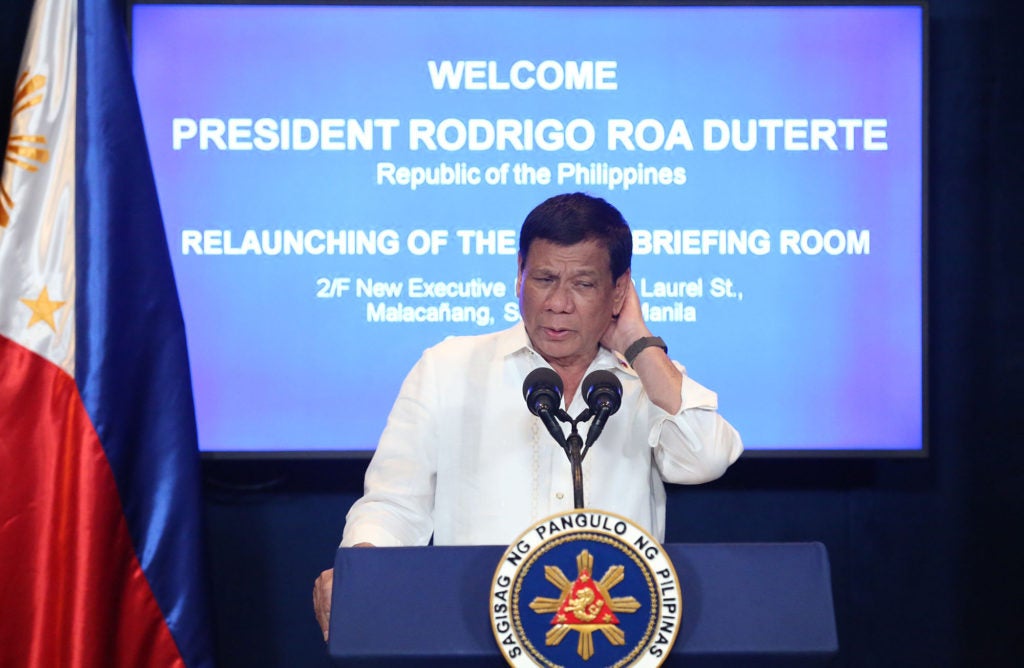 President Duterte on Thursday strongly objected to what he said were calls to expel the Philippines from the United Nations over the alleged drug killings in the country, asserting that China, Russia, and members of the Association of Southeast Asian Nations (Asean) would not allow it to happen.

In another expletive-laden speech, Mr. Duterte again railed against the European Union (EU) for supposedly interfering in the country’s affairs.

He warned EU ambassadors in Manila that he could cut diplomatic channels and order them to leave the country in 24 hours.

Mr. Duterte fumed that “stupid European Union guys” were still focused on the deaths in the country.

“And they threatened us, I said that they will have us expelled from the UN. My God, do it, stupid. Do it now. Do it now,” he said at the relaunch of the renovated press briefing room in Malacañang.

“Do not come to this country again. We don’t need you. You want to expel us? You try. Your $1,000 will earn P1 million if you can expel us from the UN. Why, will Russia and China allow it? You are fools. You think China and the rest of the countries of Asean will agree to that?” he added.

The EU’s ambassador to the country, Franz Jessen, clarified that the union had not made any calls for the Philippines’ expulsion from the United Nations.

Early this week, several European parliamentarians warned that the Philippines could forfeit preferential trade deals with the EU while the group Human Rights Watch said the country could lose its membership in the UN Human Rights Council if the country failed to address the killings.

“The recent visit of the delegation of the International Delegates of the Progressive Alliance to the Philippines on Oct. 8-9 was not a European Union mission, as falsely reported by some media outlets,” Jessen said.

Presidential spokesperson Ernesto Abella said Mr. Duterte’s “expression of outrage” was directed against statements made by the seven-member delegation of the Progressive Alliance.

“This delegation’s irresponsible statements protesting (against) the alleged killings under the Duterte administration demean our status as a sovereign nation,” Abella said.

“The call of the President for EU ambassadors to leave the country in 24 hours must be taken in this light,” he added.

Mr. Duterte said he would not allow anybody, not even the United States, to dictate on the Philippines.

“And I will tell it straight in November in the Asean (Summit)” which Manila will host, he said.

The President said critics had failed to look at other deaths, such as those of the law enforcers who run against criminals, and at the state of the drug trade in the country.

The EU is interfering in the country’s affairs because it is a poor nation, he said, emphasizing that the Philippines has long been free from colonization.

“You’re the ones. You’re the last vestiges of imperialism in this part of the world. You idiots came to our lands, Indonesia, Malaysia. Dutch for Indonesia, Malaysia for the British, and the Philippines for the Americans and Spaniards, and you have the gall to say to us, ‘We will expel you.’ Son of a bitch,” the President said.—LEILA B. SALAVERRIA