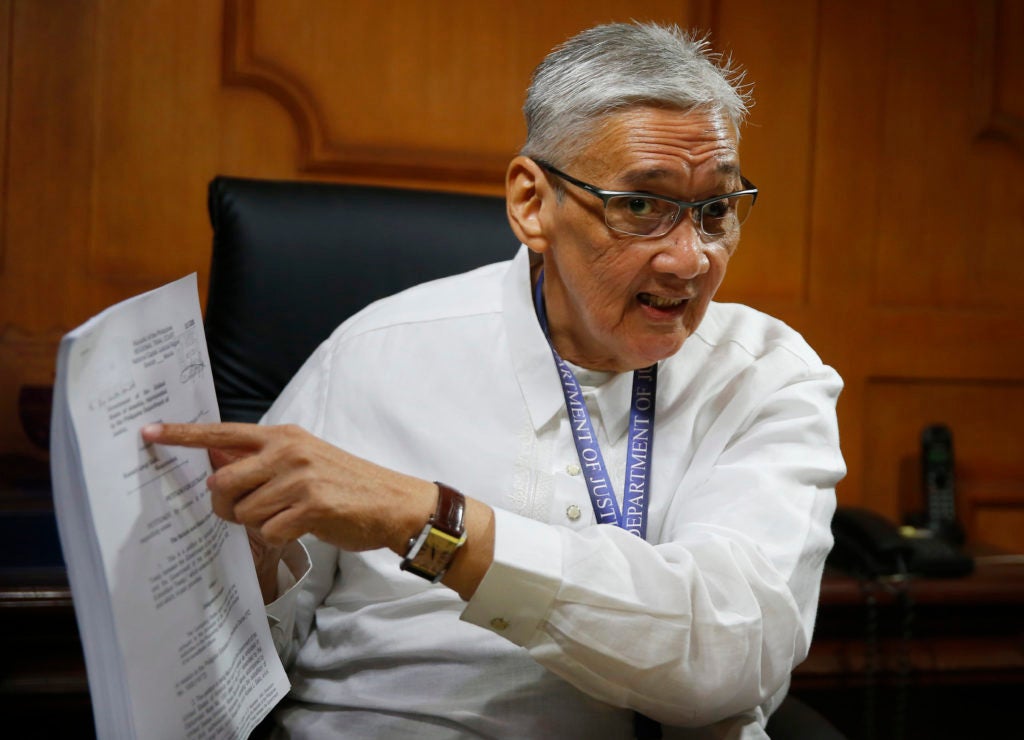 In this photo taken Monday, Oct. 9, 2017, the Department of Justice Chief State Counsel Ricardo Paras shows an extradition request by the U.S. government for Filipino doctor Russell Salic accused by U.S. authorities of plotting terrorist attacks in New York city during an Associated Press interview in Manila, Philippines. On Tuesday, Oct. 10, 2017, a lawyer for Salic, the orthopedic doctor who is now detained in Manila, said he donated money to charity but not to terrorists and is a 37-year-old Muslim who renounces terrorism and has never held a gun in his life. (AP Photo/Bullit Marquez)

A Filipino doctor accused by US authorities of plotting attacks in New York City, including in concert venues and Times Square, denies that he helped finance the disrupted plot and will fight a U.S extradition request, his lawyer said Tuesday.

Russell Salic donated money to charity but never to terrorists, renounces terrorism and has never held a gun in his life, lawyer Dalomilang Parahiman said in an interview.

US prosecutors said Friday that Salic was one of three Islamic State group sympathizers who plotted bombings and shootings to take place at New York City concert venues, subway stations and Times Square last year before US agents thwarted the plot.

Canadian citizen Abdulrahman El Bahnasawy was arrested in the US last year and has pleaded guilty, and an American of Pakistani origin, Talha Haroon, was arrested in Pakistan in November.

In May last year, Salic allegedly sent approximately $423 from the Philippines to an undercover FBI agent posing as an Islamic extremist to help fund the planned New York attacks. Salic, who allegedly was known to fellow extremists as “Abu Khalid” or “the doctor,” also informed the undercover agent that he intended to continue sending money in support of the Islamic State group in the future, according to court documents made public in New York.

Salic allegedly told the undercover agent that his ultimate goal was to join the Islamic State group in Syria but that “it would be a great pleasure if we can slaughter” people in New York, the documents said.

Salic’s lawyer, however, quoted him as saying, “I only donated money for humanitarian consideration out of pity for the needy but I have never thought of giving funds to the ISIS,” using an acronym of the Islamic State group.

Once, Salic donated money to prevent students from losing their teacher, who had not been receiving his salary, Parahiman said. An online posting about his good deed prompted many other people to seek the doctor’s help, though he was only able to help about five nongovernment groups and people, including an Australian, Parahiman said.

The lawyer also said Salic told him his Facebook account was hacked, allowing the hacker to chat with others while pretending to be the doctor. Salic decided to surrender to Manila’s National Bureau of Investigation in April after being informed by Philippine airport officials that he was being sought for terrorism-linked charges.

Salic then planned to travel to Hong Kong but did not proceed with the trip.

Chief State Counsel Ricardo Paras told AP the US government sent an extradition request in May. The Philippine government filed the request before a Manila court on behalf of the U.S. and hearings on the request would start next week.

In Islamabad, lawyer Idrees Ashraf said a Pakistani court will hear a bail plea this week by Haroon, who faces possible extradition to the United States for allegedly conspiring to plot the New York attacks.

Judge Shaukat Aziz Siddiqi of the Islamabad High Court on Tuesday asked for a response from the Interior Ministry to Haroon’s plea and set the next hearing for Friday, Ashraf said. He said his client’s father, Haroon Rashid, previously obtained a stay of his son’s extradition from the same court, saying his son is innocent and would be in danger if sent to the United States.

Haroon’s extradition was approved by a district magistrate in January.

Aside from the US charges, Salic also faces separate criminal complaints for alleged involvement in the abduction of six sawmill workers, two of whom were later beheaded, in the southern Philippine town of Butig in Lanao del Sur province in 2016, according to Philippine prosecutors.

Even if the Manila court approves the U.S. extradition request, the Department of Justice in Manila would have to decide whether to have Salic face criminal complaints in the Philippines first or be flown to the U.S. to answer the terrorism allegations there, Paras said.

The kidnappings and beheadings have been blamed on the Maute group, a band of militants aligned with IS that was largely unknown until it led a siege of southern Marawi city in May.