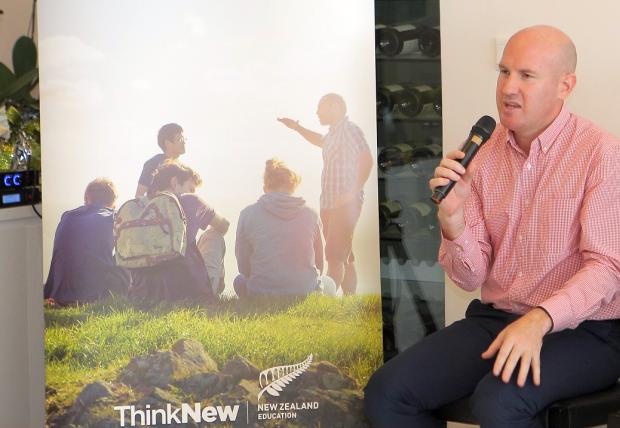 Ben Burrowes, ENZ’s regional communications and strategic relations manager for South East Asia, speaks at a media workshop conducted in May 2017 at the New Zealand Residence in Hanoi, Vietnam. (Photo from the website of Education New Zealand)

The Philippines has remained as one of the “fastest growing” education markets of New Zealand, which has lately been attracting more Filipino students with its work-study-life balance.

The surge made Filipinos one of New Zealand’s fastest growing Asian communities, which include Chinese, Indians, Japanese, and South Koreans.

One of the key reasons why the number of Filipino students in New Zealand continues to rise is because the country’s skills and learning are designed to produce work-ready graduates for the 21st century, according to Ben Burrowes, Education New Zealand’s regional communications and strategic communications manager in Southeast Asia.

In fact, New Zealand topped The Economist’s study, “Worldwide Educating for the Future Index,” which looked at how countries are providing future-skills education to their youth.

Of the 35 economies surveyed in that study released last month, the Philippines ranked 25th.

In a recent interview with the Inquirer Burrowes attributed this to New Zealand’s education system, which ensured that graduates would have not only “relevant and updated skills” but also the opportunity to work in emerging industries, given the strong partnership the education sector has with industry.

The undergraduate and postgraduate courses taken up by Filipinos are mostly related to business, health, and niche programs like disaster risk management and 3D animation.

“We’re producing work-ready graduates, especially for the 21st century,” Burrowes said. “We have a very high employability rate. An OECD [Organization for Economic Cooperation and Development] report also showed that 87 percent [of our students] go directly to work after graduation. That’s a big pull factor for Filipino students.”

According to Marty de Leon, general manager of education agency Fortrust Education Services, Filipinos preferred to go to New Zealand for studies not only because of the quality of its eduction but also because of its work-study integration.

He noted that students there could work part-time for 20 hours a week.

Their internships also provides them with “real-life work experience so they can have relevant work experience after graduation,” a component which he said is missing in the Philippines since most interns here are tasked with menial jobs.

Security was also not a problem, he said, since the country has a pastoral code of care for international students, which ensures that the government and the host communities look after the welfare of the students.

On Oct. 15, Fortrust and Education New Zealand will hold an education expo to guide Filipino students who are looking forward to studying in New Zealand.

The daylong expo will highlight the various industries that the country excels in, and how students can avail themselves of the various scholarship programs.