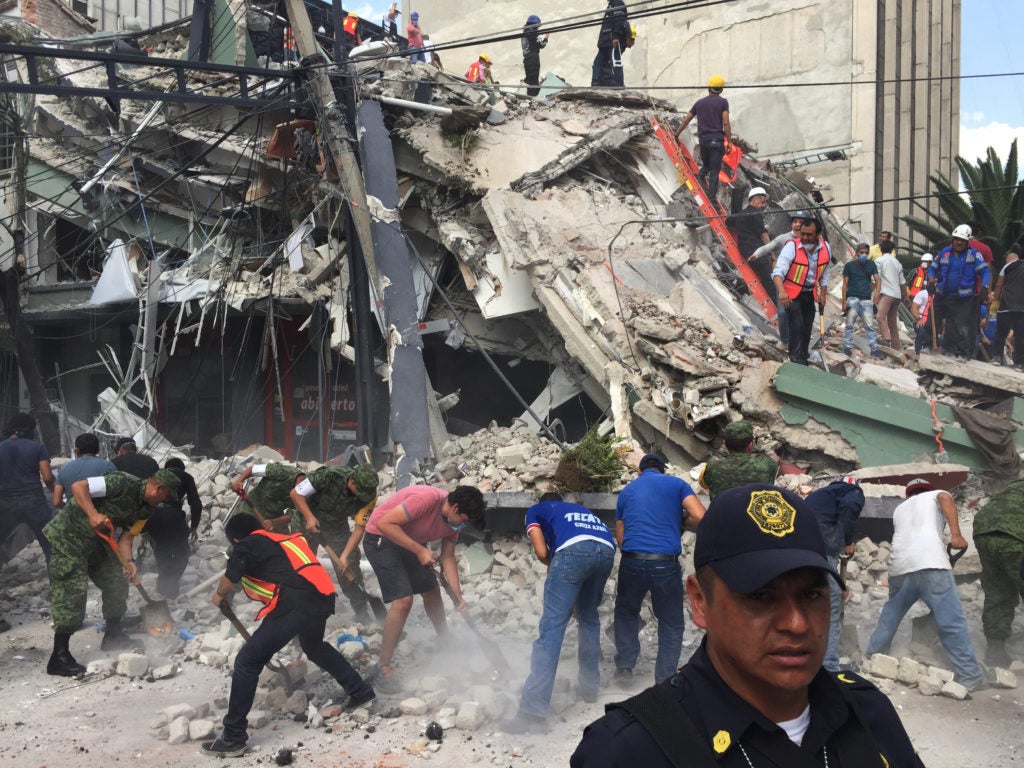 People search for survivors in a collapsed building in the Roma neighborhood of Mexico City, Tuesday, Sept. 19, 2017. A powerful earthquake has jolted Mexico, causing buildings to sway sickeningly in the capital on the anniversary of a 1985 quake that did major damage. (AP Photo/Enric Marti)

No Filipino casualties have been reported so far in the earthquake that rocked Mexico on Tuesday, the Department of Foreign Affairs (DFA) said Wednesday.

In a statement, the DFA said the 7.1-magnitude tremor that hit central Mexico left many structures, including the building that housed the Philippine Embassy, crumbling and badly damaged.

Philippine Ambassador to Mexico Eduardo De Vega said the staff of the Embassy were safe.

“We are all a bit shaken but otherwise all of us from the Embassy are all right,” De Vega said in a text message to Foreign Affairs Sec. Alan Peter Cayetano.

De Vega said he and most of the 11-member staff rushed out of the embassy when debris started falling down the walls and ceiling shortly after the earthquake struck.

He said the embassy occupies the first two floors of an eight-story office building in the Cuauhtemoc neighborhood near the city center.

Cayetano sympathized with Mexico, which was struck by a strong quake for the second time within the last two weeks. The latest earthquake has claimed 138 lives so far according to the Mexican government.

“The people of Mexico are again in our thoughts and prayers today,” Cayetano said.

“We offer our sympathies to the Mexican government and to those who lost their loved ones in this tragedy,” he added.

Authorities are expecting the number of fatalities to rise from today’s tremor, which struck on the anniversary of a deadly 1985 earthquake that leveled the capital and left thousands of people dead. /idl

ADVERTISEMENT
Read Next
PNP official: US has put on hold delivery of 27,000 rifles to PH
EDITORS' PICK
Current dominant strain of COVID-19 more infectious than original—study
Smart releases Hyun Bin’s second TVC
DOLE: Return of OFWs’ remains from Saudi to be ‘delayed,’ deadline moved to ‘early next week’
‘Justice will be done,’ Duterte assures as he vowed probe on Jolo incident to bare ‘truth’
EuroMillions Superdraw: A lottery draw unlike any other is coming to the Philippines
Water remains our saving grace right now
MOST READ
Locsin warns of ‘severest response’ if China’s army drills in SCS ‘spill over’ to PH domain
Duterte tells military: No other president looked at you the way I did
BREAKING: Duterte signs anti-terror bill into law
‘Very timely, historic’: Senators laud passage of anti-terror bill despite ‘pressures’
Don't miss out on the latest news and information.