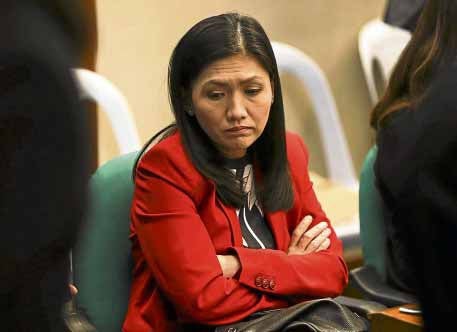 The heist was a conspiracy, but a former Rizal Commercial Banking Corp. (RCBC) branch manager is left holding the bag.

Maia Deguito will face trial alone on money laundering charges in connection with last year’s $81-million cyberheist on the Bangladeshi central bank. Complaints against her coaccused were dropped.

In a telephone interview, an audibly distraught Deguito said she was in the process of posting bail at a Makati City Regional Trial Court on eight counts of money laundering.

“This is too obvious,” she said, explaining that charges against all other parties in the biggest money laundering case in the country’s history had been dropped and leaving her, the lowest-ranking official among all the bankers involved, to face the courts alone.

“You know me, I have no connections,” Deguito said. “It really saddens me.”

The Anti-Money Laundering Council (AMLC) has accused several RCBC officials of money laundering in a complaint filed in the Department of Justice (DOJ), though the bank has blamed only a couple of rogue officials.

Deguito said she was being assisted by her lawyer and that they just received a copy of the DOJ resolution that excluded the owners of the shuttered money changer Philrem—Michael and Salud Bautista.

Deguito was the manager of RCBC’s Jupiter Street branch in Makati, which held the fake bank accounts where the stolen money from the Bangladesh heist was deposited. From there, the money found its way into the country’s opaque casino system.

During the ensuing Senate investigation, Deguito claimed that she was acting on orders of top RCBC officials to facilitate the transaction, specifically its then president Lorenzo Tan and treasurer Raul Tan, both of whom have since left the bank.

The heist, according to the US Federal Bureau of Investigation, was state-sponsored.

Many of the transfer orders were blocked or reversed by intermediary banks, but $81 million made it to accounts with fake names at RCBC.

Bangladesh Bank and RCBC have exchanged accusations of responsibility for the crime.

RCBC was fined a record P1 billion by the Bangko Sentral ng Pilipinas for its failure to prevent the movement of the stolen money through its system, while a top Bangladeshi investigator has said he suspected some IT technicians from the Dhaka-based bank helped the hackers carry out the heist.

Jobless since last year, Deguito is resigned to probably not working in a bank again after her experience.

“I’m the only one in this DOJ resolution,” she said during the phone interview. “Philrem has been cleared.”

Apart from facilitating the conversion of the stolen $81 million into local currency, Philrem was also accused by casino junket operator Kim Wong during last year’s Senate probe of holding on to $17 million of the missing Bangladeshi funds, which the Bautista couple deny. To this day, those funds have remained unaccounted for.

Wong was initially included in the money laundering complaint, but he was cleared by the DOJ following his Senate testimony and his return of $4.6 million and P450 million, separately, which, he said, were brought in by a gaming client without informing him that the cash was obtained through illegal means.

The Bangladesh Bank has been able to retrieve only about $15 million of the money stolen in one of the world’s biggest cyberheists. The $15 million is part of $35 million that Wong returned to the authorities.

On Tuesday, Bangladesh Bank sent a team of officials to the Philippines to push for the recovery of more of the $81 million stolen from its account at the New York Federal Reserve last year and routed through RCBC.

A Bangladesh Bank lawyer, Ajmalul Hossain, told Reuters on Monday that the central bank was working on “various ways” to get back the rest of the money from institutions in the Philippines.

Hossain said two officials from the Bangladesh Financial Intelligence Unit, controlled by the central bank, would meet with representatives of the DOJ, AMLC and a presidential commission, among others.

“All the money that was lost has been frozen … we’re trying to expedite the process of recovery,” Hossain told Reuters by phone from London.

In Makati City, Deguito went to the Hall of Justice yesterday to post bail for eight counts of money laundering filed against her in four different court branches.

Deguito was required to post a P100,000 bond for each count to avoid arrest.

She described what’s happening to her as “stressful” but she would rather “let God” take care of it.

Deguito said her three kids, who were all in school, had no idea that she and her husband went to court.

“Right now,” she said “my priority is to protect my kids from this issue. They’ve been through a lot already.”