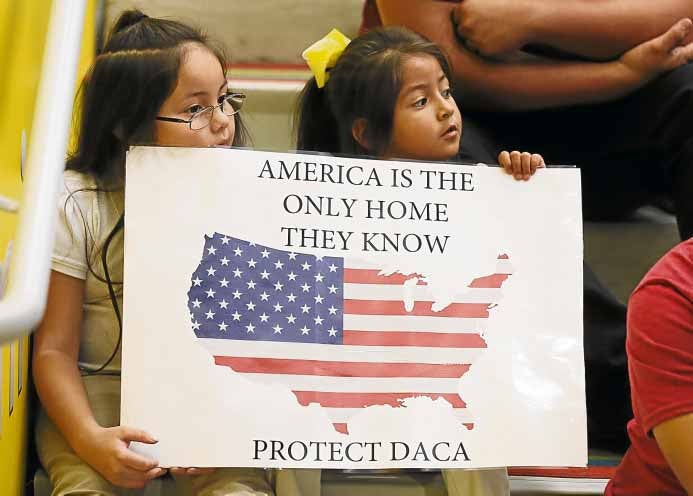 IMMIGRATION PROGRAM Eliza Sanchez (left) and Victoria Espinoza attend a news conference urging people of Oklahoma City to ask their legislators to act on Donald Trump’s plan to “wind down” a program protecting immigrants who were brought into the United States illegally as children. —AP

The Philippine government will assist some 10,000 Filipinos who may be deported after the Trump administration rescinds a program that allows undocumented immigrant children to stay legally in the United States, officials said on Wednesday.

Chargé d’Affaires Patrick Chuasoto of the Philippine Embassy in Washington said that of the 3.4 million Filipinos in the United States, around 310,000 are undocumented.

He said about 10,000 young Filipino migrants were able to stay because they were enrolled in the Obama administration’s Deferred Action on Childhood Arrivals (Daca) program.

Foreign Secretary Alan Peter Cayetano said funds earmarked to assist Filipinos overseas could be released to help those affected by the revocation of Daca.

Cayetano said the Department of Foreign Affairs would offer “limited” assistance to those affected. They should “prepare for the worst,” he said.

The immigrants grew up in America and are working or going to school there. Some are building businesses or raising families of their own, while many have no memory of the countries where they were born.

Now, almost 800,000 young immigrants who were brought into the United States illegally as children or overstayed their visas could see their lives upended after the Trump administration announced on Tuesday that it was ending the Obama-era program that protected them from deportation.

“We are Americans in heart, mind and soul. We just don’t have the correct documentation that states we’re American,” said Jose Rivas, 27, who is studying for a master’s in counseling at University of Wyoming.

Rivas’ grandmother brought him to the United States from Mexico when he was 6.

He wants to become a school counselor in America but lamented: “Everything is up in the air at this point.”

The news that the government is phasing out Daca was met with shock, anger and a sense of betrayal by its beneficiaries, often called “dreamers”—from the program’s moniker, “Dream Act.”

Demonstrations broke out in New York City, where police handcuffed and removed over a dozen immigration activists who briefly blocked Trump Tower, and in other cities, including Salt Lake City, Denver, Los Angeles and Portland, Oregon.

Students walked out of class in protest in several cities, including Phoenix and Albuquerque.

Attorney General Jeff Sessions said Daca, started by then President Barack Obama in 2012, was an unconstitutional exercise of executive power.

The Trump administration and other Daca opponents argue that it is up to Congress to decide how to deal with such immigrants.

Late Tuesday night, Trump tweeted, however, that he might get involved in the issue if Congress does not come up with legislation.

Attorneys general for several states threatened to sue to protect the Daca beneficiaries.

Utah Attorney General Sean Reyes, a Republican and an early Trump supporter, said the president had every right to end Daca.

But he added that it would be unconscionable to deport those who benefited from the program.

“These children grew up believing they are American, and so many of them have lived lives of which America can be proud,” Reyes said.

At a Los Angeles rally, handyman John Willis carried a sign saying “American lives matter” and criticized the Daca program as an “unlawful tyrannical executive order that our previous president thrust upon us.”

“I don’t wish these kids to be sent back to Mexico or anything like that. But I don’t believe we should have two sets of laws,” he said.

“We have one set of laws, we should follow them. Congress needs to get up off the pot and enact some legislation to take care of this mess,” he added. —With a report from AP