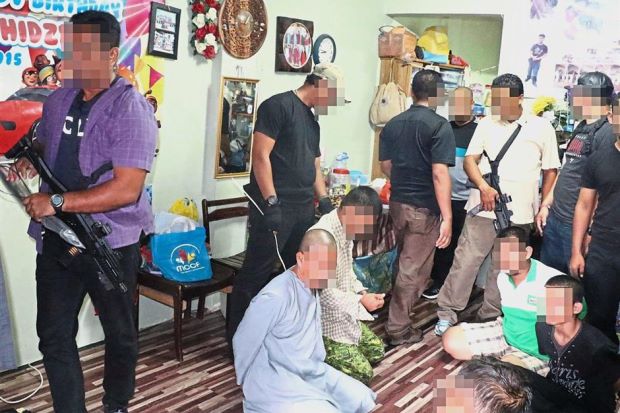 KUALA LUMPUR—Eight Abu Sayyaf Group (ASG) militants detained in an anti-terror swoop on the eve of National Day were planning attacks on the celebration at Dataran Merdeka and the SEA Games closing ceremony on Aug 30.

Security sources said the eight militants, who were among 19 arrested in the swoop, had been casing the two locations for quite some time and their attacks could have been big.

“It is still too early to tell the exact method they were planning on using as the authorities are still investigating.

“They could have used several different ways, ranging from lone wolf attack to improvised explosive devices (IEDs),” a source told The Star yesterday.

The source said the police were keeping a lookout for the possibility that remnants of the group were still at large in the country.

“The mastermind of this group is a 25-year-old man, who sneaked into Sandakan in Sabah and headed to Kuala Lumpur in December 2015,” said Mohamad Fuzi.

“He was involved in six kidnappings of Philippine nationals as well as clashes with the Philippine military,” he said, adding that the suspect was also responsible for killing a Christian hostage in southern Philippines in 2010.

The suspect is believed to have held meetings with Malaysian militants Dr. Mahmud Ahmad, Mohd Najib Hussein and Muhammad Juraimee Awang Ramlee at Kampung Tipo-Tipo in Basilan in September 2015.

“We received intelligence that the same suspect planned to launch attacks during the closing of the SEA Games in Bukit Jalil and during the National Day celebration in Dataran Merdeka,” Mohamad Fuzi said.

Prior to the ASG arrests, the Bukit Aman Special Branch Counter Terrorism division also arrested 11 others – nine foreigners and two Malaysians – from July 4 to Aug 25 in Kuala Lumpur, Kelantan, Selangor and Johor.

In the first raid, a 25-year-old Bangladeshi, who works as a temporary teacher at a religious school in Gombak, was arrested in Shah Alam on July 4.

“He is suspected of being a member of Jamatul Muhahideen Bangladesh, which is an Islamic State affiliate.

“The suspect entered Malaysia on Sept 4 last year on the pretext of furthering his studies,” Mohamad Fuzi said.

The second raid saw the arrests of a Malaysian and two Maldives nationals. They were arrested in Johor Baru on Aug 7 and Aug 9.

“The 40-year-old Malaysian trader was arrested for having six issues of Dabiq, the official IS newsletter, and a few IS-related articles on his mobile phone.

“The two Maldivians, who worked as air-conditioner technicians, were arrested for using Malaysia and Singapore as transit points before heading to Syria to join IS,” he said.

The next series of raids on Aug 11 saw a 63-year-old retired Malaysian teacher and two Iraqi nationals arrested in Kelantan and Selangor.

“The retired teacher was arrested in Bachok, Kelantan, for actively promoting IS propaganda via his two Facebook accounts while the two Iraqi siblings were arrested in Gombak. We suspect they are commanders of an IS cell in southern Iraq,” he said.

The country’s new top cop said the next batch of arrests on Aug 15 and Aug 16 in Kuala Lumpur and Selangor involved a Palestinian man, who planned to head to southern Philippines to join the IS faction there, and an Iraqi man, believed to be linked to an IS-friendly Albanian terror cell.

“We also arrested two Indonesian men, aged 29 and 47, in Petaling Jaya on Aug 25 for recruiting militants for IS in Syria,” he said.