globalnation /
A DROP TO FILL A BUCKET 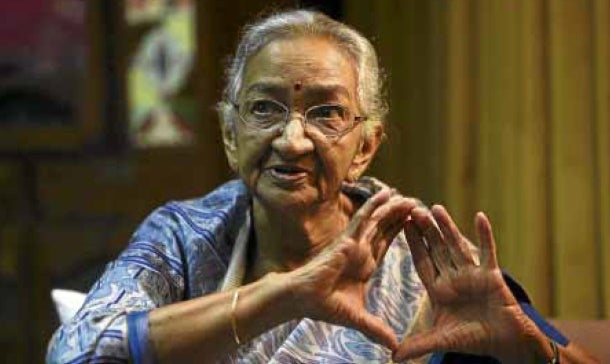 For someone who has spent four decades trying to help rebuild the war-scarred lives of women and children in Sri Lanka, Gethsie Shanmugam still believes in young people, who, she thinks, will create a world far better than what she has seen.

—not only in Sri Lanka, but everywhere—create a new world, a new way of living,” said Shanmugam, 82, a former teacher whose work among women and children who are victims of violence and war in Sri Lanka has won for her a Ramon Magsaysay Award.

“They are going to live in a world that is getting very fast, so they might not go for this bickering, this fighting, or being selfish, I hope,” she said.

“I believe in the young people. They will do something, a drop that will add up to something to fill a bucket,” she added, her brimming optimism unexpected from someone who had seen war kill an estimated 35,000 children in over two decades in Sri Lanka, where one in every four children in conflict areas lost one or both parents, and where 300,000 people were displaced.

But Shanmugam, whose first name is Tamil for the biblical name Kezia, spoke about how much of her work navigating through war-torn Sri Lanka involved lots of creativity and imagination.

She recalled crossing the Sinhalese-Tamil line at the height of the fighting to counsel women and children in the conflict zones.

“We wanted to keep the children safe, but we can’t even talk about that,” Shanmugam said.

To enter the war zone, she said, one should avoid talking about war.

“It also helps if you’re already (an) aged (woman), you earn some degree of respect,” she said, smiling.

Shanmugam remembered a night when there was a firefight, and her group had to put on a show to calm the children.

In a village, where there was no electricity, staging a show was a challenge.

They found a white blanket, lit a lantern, and let the children play and dance, while the rest watched in the shadows.

“So, as you can see, the war was raging, but the children had fun, playing and dancing, and we all watched in the shadows,” Shanmugam said.

“Of course, we were all afraid but we let go (of our fears), and somehow, that brought us closer together,” she added.

But Shanmugam said her group could not tell the women directly not to send their children to fight.

“So, we don’t directly tell the women, ‘Don’t let your children go (to the front),’ otherwise, we become targets of suspicion,” she added.

Instead, Shanmugam and her group came up with community projects that indirectly helped parents provide for their needs at home.

“We worked with women and children, mainly because the men were not there, and the women needed that kind of support, but you can’t make the psychosocial (concerns) separate from the economic, you know, so, we also addressed these needs,” she said.

She described her mother as a Bible woman while her father used to work for a British tea estate.

It was while working in Colombo’s St. Joseph College that she was trained for counseling work at the time when the profession was still at an early stage in Sri Lanka.

Shanmugam volunteered for work at Subodhi Institute of Integrated Education where she helped teenagers deal with relationship crisis.

A trip to a community opened her eyes to children in critical need of help and protection.

After retiring from St. Joseph College in 1983, she started doing psychosocial work for children and families displaced by war in the northern and eastern provinces of Sri Lanka.

Among her most notable projects in Colombo for Save the Children Norway (SCN) was organizing women and children into groups in the communities, so that children could protect each other instead of being sent to foster homes.

“They called that project, ‘unaccompanied children caregiving project,’” she said.

In electing her to the award, the Ramon Magsaysay Foundation (RMF) board of trustees recognized Shanmugam for “her compassion and courage in working under extreme conditions to rebuild war-scarred lives, her tireless efforts over four decades in building Sri Lanka’s capacity for psychosocial support and her deep, inspiring humanity in caring for women and children, war’s most vulnerable victims.”

The RMF board also described Shanmugam to have braved bombings, searches and threats of arrests in the conflict zones as she did counseling work with colleagues, trained teachers and nongovernment organization workers.

As a Tamil-speaking expert within SCN, she also took a lead role in designing programs and doing research training and counseling as part of psychosocial support projects in war-affected schools.

Shanmugam said she was shocked when she was chosen to receive the award in Manila.  “I did not expect this at all, my world is different from the world of the big awards,” she said.

But for her, her work with women and children had come so naturally. “Being a mother, a grandmother, makes it so much easier to be with women,” Shanmugam said. “No, I won’t even call it easier,” she corrected herself. “It’s just there.”

Sri Lanka, she said, was still struggling to recover after years of civil war.

“Any country after a war cannot wake up immediately,” Shanmugam said. “It’s a bit slow. But what I see right now is a struggle, and though, it might not be easy, we are slowly getting there.”

She said she regarded her work as just a drop in the ocean.