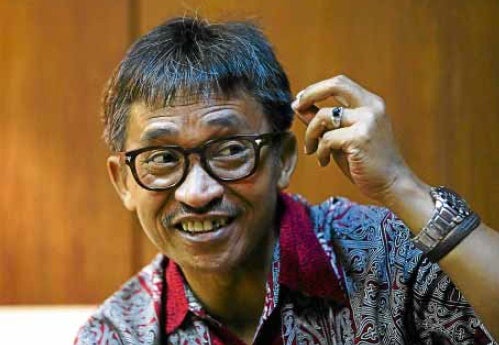 Little did he know that his love of nature would lead him to reconnect to his ethnic roots and become one of Indonesia’s leading advocates of the rights of indigenous peoples (IPs), locally known as the masyarakat adat.

Nabadan, 53, one of this year’s Ramon Magsaysay awardees, will be honored today for “his brave, self-sacrificing advocacy to give voice and face to his country’s IP communities, his principled, relentless, yet pragmatic leadership of the world’s largest IP rights movement, and the far-reaching impact of his work on the lives of millions of Indonesians.”

A member of the Toba Batak IP community of Indonesia’s North Sumatra province, Nabadan began his social advocacy as a student and continued as a nongovernment organization (NGO) officer after graduation.

Being a nature lover, he became an environmental activist.

Nabadan said he was not really conscious of what it meant to be an indigenous person until, while working in an antilogging campaign in his community, he realized that the land taken over by a big industrial lumber company was actually ancestral land that belonged to his grandparents and other Toba Batak families.

His exposure to the injustices and marginalization suffered by his people, Nabadan said, made him realize he was a victim.

He decided to focus on IP rights and has since raised this discovery of his IP identity and responsibility to involve millions of others.

According to Nabadan, Indonesia has 1,128 ethnic groups and about 70 million are categorized as IPs.

Recognition of IP rights, he said, was neglected in the past, particularly under the Suharto dictatorship when IP advocates were persecuted and labeled as separatists, “antidevelopment,” or communists.

In 1999, after Suharto’s fall, Nabadan organized a congress that launched Aliansi Masyarakat Adat Nusantara (Aman), or the Indigenous Peoples Alliance of the Archipelago, a mass-based organization that today has more than 115 local chapters and 21 regional chapters throughout the country’s 34 provinces.

Nabadan said the defense and recognition of indigenous people’s ancestral domains was one of Aman’s priorities.

Under previous regimes, he said, the government converted 72 percent of IP territories into state forests and the remaining 28 percent into national parks.

State forests were soon turned over to private companies for logging and plantation concessions.

One of Aman’s main projects is the mapping of the vast territories occupied by the country’s indigenous peoples, which aims to recognize their right to have a say in development and natural resource management of their ancestral domains.

“Our Constitution clearly says that the State recognize and respect indigenous rights, but in reality, there is no effective protection for us because we do not exist on the government’s maps, in the government’s administration system. So now the movement is to make sure that IPs become part of the whole system,” he said.

“That is why we need to map  our territory and we hand over that map to the government and we integrate those maps into the One-Map Indonesia,” he added, referring to the name of the mapping project.

From compasses, Aman and IP community representatives turned to using modern cartographic technology such as GPS and drones.

In 2010, Aman and other NGOs launched the Ancestral Domain Registration Agency to create a single data base for verifying land or forest claims on ownership, use and tenure in view of incomplete, inaccurate and conflicting government data.

The Aman maps and constitutional rulings on state forests await implementation by the administration of President Joko Widodo, whom Aman endorsed in the 2014 elections.

“We want this map to become the basis for the development plans. The government needs to ask the IPs what kind of development is suitable for their culture. That is the idea,” he said, pointing to the Philippines, which has an IP rights law that recognizes ancestral domains, as a model.

He recounted that the years of exploitation suffered by indigenous peoples turned them into “minorities” and made them resentful of development.

“The IP became aware that their living spaces are shrinking and shrinking. Worse, they are becoming marginalized, politically, economically and socially, in their own lands,” he said.

While Nabadan talks of indigenous peoples as “owners of the land” whose “consent” developers need to secure, he does not refer to proprietorship rights.

Rather, he speaks in the stewardship sense of land ownership, pointing out that IP communities were already present hundreds of years before Indonesia came into being.

“The IP are the guardians of the forests, the rivers, the lakes. They have to be the main actors in development, in natural resource management, and in protecting nature,” he said.