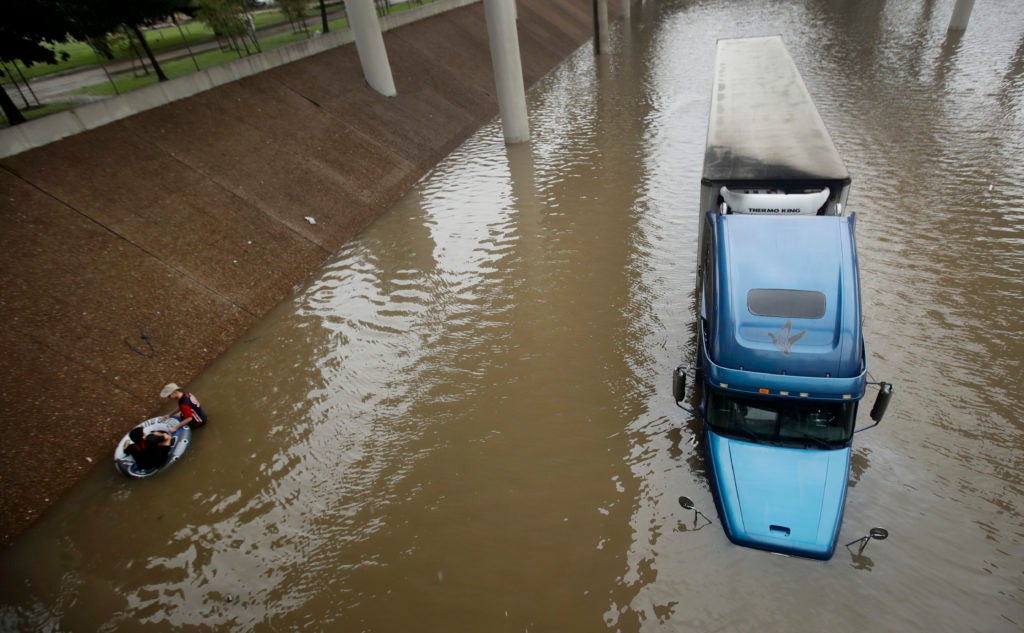 An unidentified man helps Carlos Torres, in tube, get to dry ground after Torres drove his tractor-trailer into a freeway flooded by Tropical Storm Harvey on Sunday, Aug. 27, 2017, near downtown Houston, Texas. AP

The Philippine government on Monday “expressed its sympathies over the reported deaths in Texas” following the devastation wrought by hurricane Harvey.

At least five people were killed in the massive flooding that followed, according to the Department of Foreign Affairs.

The agency said no Filipino was harmed during the storm. “None among the 80,000-strong Filipino Community in Houston and surrounding areas has been reported to be among the dead or injured,” it said.

”Our hearts go out to the people of Houston, including the thousands of our kababayan, who have to go through this terrible ordeal,” Foreign Affairs Secretary Alan Peter S. Cayetano said in a statement.

“We offer our deepest sympathies to the families of those who lost their lives in this disaster,” Cayetano said. “We will continue to pray for Houston and its people.”

The Consulate General in Los Angeles and the Honorary Consulate in Houston will continue to monitor the effects of the storm on the Filipino community, the DFA said.

“According to Consul General Adelio Angelito Cruz, there are approximately 70,000 members of the Filipino Community in Houston, the fourth largest city in the United States; 5,000 in Rio Grande Valley; and another 5,000 in San Antonio,” the statement said.

Cruz said they continue to remain alert “as the storm, which dumped more than 26 inches of rain in Metro Houston in the past two days, is expected to trigger ‘catastrophic flooding’ in next few days.”

Filipino nationals needing assistance may call the Consulate General in Los Angeles at +1 (213) 587-0758.