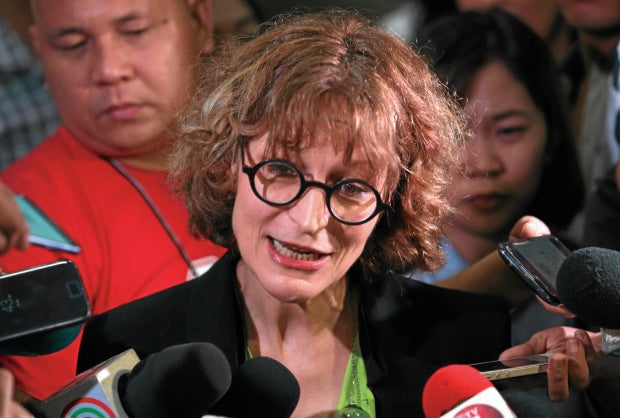 Callamard took to Twitter her message of condolences to Delos Santos’ bereaved family, as well as to all families “victimized” by what she described as a “cruel” drug war under President Rodrigo Duterte’s administration.

“My heart-felt condolences to #kian family and to all families victimized by this cruel war. #Makehisdeaththelast #Philippines,” she tweeted on Saturday, the day of Delos Santos’ funeral at La Loma Cemetery in Caloocan City.

My heart-felt condolences to #kian family and to all families victimized by this cruel war. #Makehisdeaththelast #Philippines

The UN official, sharing a report by the Inquirer on Delos Santos’s killing, earlier referred to Duterte’s war on drugs as “murder.”

“Yes, Pent Duterte, this is murder. All unlawful deaths must be investigated. To stop all murderers,” Callamard tweeted.

Yes, Pent Duterte, this is murder. All unlawful deaths must be investigated. To stop all murderers #Philippines https://t.co/WKKAyAE358

The Senate committee on public order and dangerous drugs, led by senator Panfilo Lacson, launched a probe into the slay of the 17-year-old high school student during an anti-drug operation of Caloocan City policemen on August 16.

Cops who killed the boy claimed that Delos Santos fought back, which was contrary to some witnesses’ statements that he was “mauled” by the cops and that no gun fight ensued between the boy and the cops.

A closed circuit television footage also showed two cops dragging a boy, while autopsy results conducted upon the request of Delos Santos’ family revealed two gun shot wounds to his head head and one at his back.

Callamard, an official from Office of the UN High Commissioner for Human Rights, has consistently criticized Duterte’s brutal drug war, which ended thousands of lives since last year. JE