Duterte finds no reason to go to war over sandbar 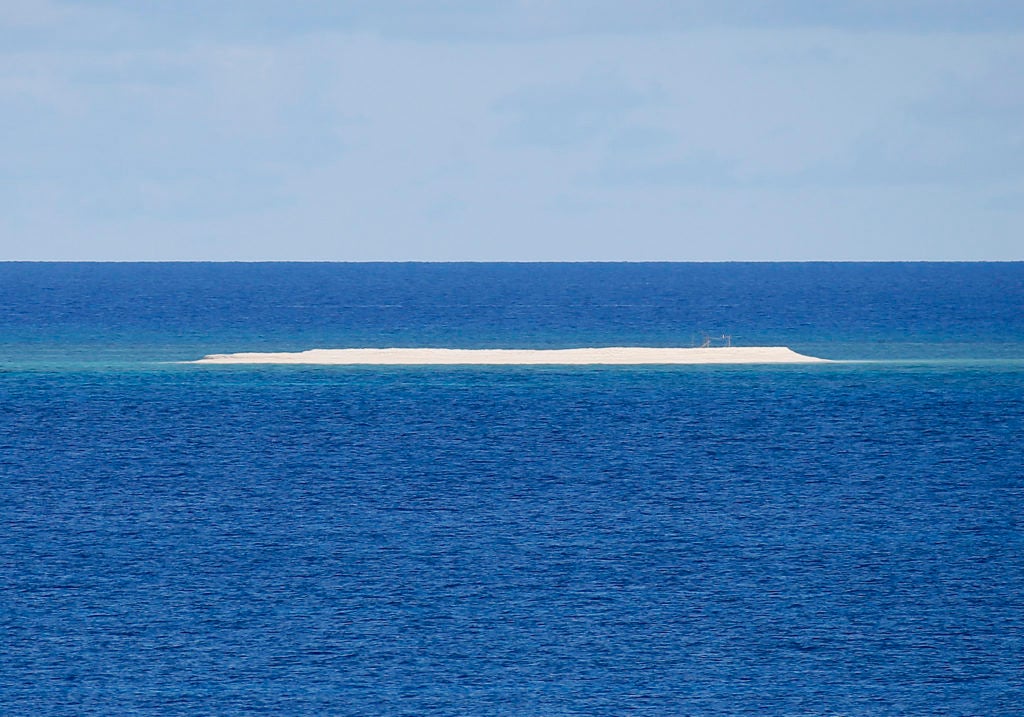 A sandbar seen from Pag-asa Island in the Spratly archipelago. —AP

President Duterte on Monday night said he saw no reason for the Philippines to go to war with China over a disputed sandbar in the West Philippine Sea.

“Why should I defend a sandbar and kill Filipinos because of a sandbar? China assured me that they would not build anything there,” Mr. Duterte said during a late-night press briefing in Malacañang, breaking his silence on what Supreme Court Senior Associate Justice Antonio Carpio called “invasion of Philippine territory by China.”

Carpio said the Chinese vessels were “well within” the 22 km territorial sea of Pag-asa and could not claim “innocent passage” or invoke freedom of navigation in the high seas to explain its ships’ presence in the area.

“Sandy Cay is a Philippine land territory that is being seized—to put it mildly—or being invaded—to put it frankly—by China,” Carpio said.

Carpio, a member of the legal team that argued the Philippine challenge to China’s claim to almost all of the South China Sea in a UN-backed arbitral court in The Hague two years ago, said the least President Duterte and Foreign Secretary Alan Peter Cayetano could do was “vigorously protest this invasion of Philippine territory by China.”

Cayetano said on Tuesday that the matter had been “resolved diplomatically.”

Speaking to reporters in the House of Representatives, Cayetano said “there’s no more problem in that area.”

“If there was a problem, it was resolved diplomatically. But it is not true that there was an attempt to invade or seize” Sandy Cay, he said.

Cayetano, however, did not say what diplomatic action had been taken to resolve the issue.

At the press briefing in the Palace on Monday night, Mr. Duterte said the Chinese foreign ministry and Chinese Ambassador to the Philippines Zhao Jianhua both assured him that China would not build structures on Sandy Cay.

The President also said that Manila had reached a “modus vivendi” with Beijing and this included the understanding that China would not build new structures in the area and that it would not drive away Filipino fishermen.

“They’re just patrolling there because we’re friends,” he added.

Mr. Duterte acknowledged the presence of Chinese ships in the area, but denied that they were “invading” Philippine territory.

“That’s not true. They are just there but they are not claiming anything,” Mr. Duterte said, adding that the Chinese were not “blocking” Filipino fishermen.

“China would not do that. That’s free for all because it’s claimed by them and claimed by us. At least we are not (being) driven out. That was the problem before,” he said.

“Now after the modus vivendi, you let it be… you know when you fish, you look for the rich fishing grounds. Of course, you won’t go to where there’s no fish. Our Navy is also there across them,” he added.

Mr. Duterte said he believed the Chinese when they said that they would not occupy Sandy Cay.

“They are not occupying it. I have their assurance that they will not occupy anything,” Mr. Duterte said.

“I believe in their word. If they break it, then I will no longer believe them,” he added.

The President also said China would not “bother” the Filipino troops on nearby Pag-asa, the largest island controlled by the Philippines in the Spratlys.

“If we have trouble there and it erupts into violence, it would be a great sacrifice and I am sure we will not be up to it. I am a realist. Don’t push me,” Mr. Duterte said.

“Those pushing me [to take a tougher stance against Beijing], they will be safe in their offices if the fighting starts but the nearest missile of China can hit the city of Manila in seven minutes,” he added.

In the House on Tuesday, Cayetano told reporters that Carpio “had the wrong facts, wrong premise and wrong conclusions.”

“What does invasion mean? It means you are seizing it and building another country. That is not true,” he said, adding that National Security Adviser Hermogenes Esperon had similarly denied the invasion angle.

Cayetano said the mere presence of Chinese vessels at Sandy Cay did not violate the United Nations Convention on the Law of the Sea (Unclos), as all countries enjoyed freedom of navigation in the high seas.

He also denied that the Department of Foreign Affairs (DFA) was not doing anything to assert the Philippines’ sovereignty in the West Philippine Sea.

The West Philippine Sea is the name of the waters within the Philippines’ 370-km exclusive economic zone in the South China Sea.

Cayetano said there were many ways of lodging a diplomatic protest.

“[I]n a conversation, we talk very differently from all other departments because we serve as a bridge. We find a way to talk to all the claimants (in the South China Sea) in a very firm manner but still in a diplomatic manner because we’re looking for a solution,” he said.