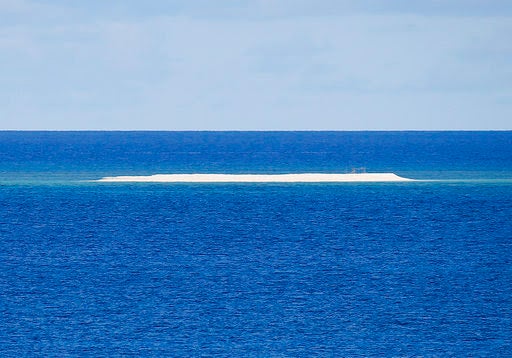 In this Friday, April 21, 2017 photo, a sandbar is seen from the Philippine-claimed Thitu Island off the disputed South China Sea in western Philippines. On Tuesday, Aug. 22, 2017, two Filipino security officials said China has deployed its navy and coast guard ships in a cluster of uninhabited sandbars in the disputed South China Sea amid concerns that the Philippines may build structures on them in an emerging territorial issue that the government stated was quickly resolved. (AP Photo/Bullit Marquez)

MANILA, Philippines- China recently deployed navy and coast guard ships in a cluster of uninhabited sandbars in the disputed South China Sea amid concerns that the Philippines may build structures on them, two Filipino security officials said Tuesday. The government, however, said the issue was quickly resolved amid the Asian neighbors’ friendlier ties.

Two senior Philippine security officials told The Associated Press that three Chinese navy ships, a coast guard vessel and 10 fishing boats began keeping watch on Sandy Cay on Aug. 12 after a group of Filipino fishermen were spotted on the sandbars. The Filipinos eventually left but the Chinese stayed on.

The two spoke on condition of anonymity, saying only the Department of Foreign Affairs in Manila has been authorized to publicly discuss issues related to the country’s territorial disputes with China. The foreign affairs department, however, has in recent days refused to divulge details of the situation at Sandy Cay, a cluster of three sandbars.

A senior Philippine diplomat, who also spoke on condition of anonymity because of a lack of authority to discuss the issue publicly, said China “is concerned that we will build” structures on the sandbars. Chinese and Philippine officials have quietly worked to resolve the issue in recent days, said the diplomat, who is involved in the talks.

Philippine troops and villagers based at Thitu call it Pag-asa -Tagalog for hope – while the Chinese call the island Zhongye Dao.

The Chinese military presence near Thitu sparked concerns in Manila.

“In short, Sandy Cay is a Philippine land territory that is being seized, to put it mildly, or being invaded, to put it frankly, by China,” Carpio said in a statement over the weekend.

The 1951 treaty binds the allies to come to the aid of each other when attacked.

Cayetano, however, told reporters Tuesday that the issue has been diplomatically resolved and denied that China has invaded Sandy Cay.

“Let me assure you, there is no more problem in that area,” Cayetano told reporters, declining to provide details. “But it is not true that there was an attempt to invade or seize it.”

Much-friendlier ties between Manila and Beijing under Duterte have allowed both governments to manage their disputes better. “If our relationship with our neighbors isn’t this good, the situation in the West Philippine Sea will be much, much worse,” Cayetano said, using the Philippine name for the South China Sea.

Duterte told reporters over dinner late Monday that he has been assured by China’s ambassador in Manila, Zhao Jianhua, and the Chinese foreign ministry that Beijing has no plans to occupy or build structures on Sandy Cay.

“They’re not invading,” ABS-CBN TV network quoted Duterte as saying. “They are just there but they are not claiming anything.”

One of the Philippine security officials said the military has been monitoring the Chinese presence at Sandy Cay but added it was difficult to check if Beijing’s ships were still there due to bad weather in the remote offshore region.