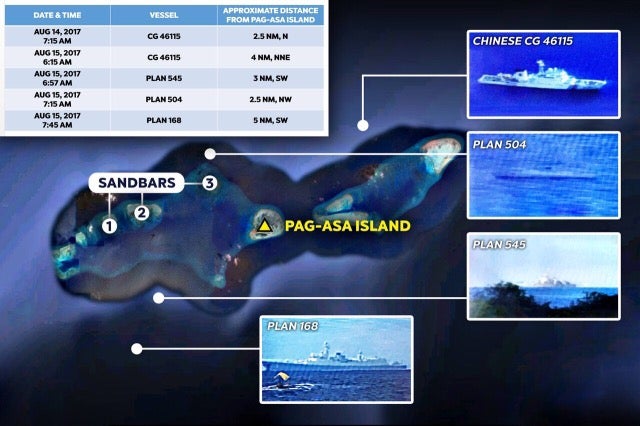 Foreign Affairs Secretary Alan Peter Cayetano on Wednesday allayed the fears of Magdalo Rep. Gary Alejano regarding the presence of Chinese Navy and Coast Guard vessels as well as maritime militia in the northern part of Pag-asa Island.

Cayetano held a press conference at the House of Representatives where he is attending a series of committee hearings to brief lawmakers in closed-door sessions about talks for a joint exploration deal with China over the South China Sea.

Asked for his reaction to Alejano’s claim of a “suspicious massing up” of Chinese vessels north of Pag-asa Island and an alleged “threat to our interest,” Cayetano said there is no situation near Pag-asa Island that could prompt the country’s mutual interest now with China.

He said the presence of Chinese ships could just form part of freedom of navigation being enjoyed not just by China, but even the country’s key ally the United States.

Cayetano, however, did not confirm that such ships and militia were spotted near Pag-asa Island. 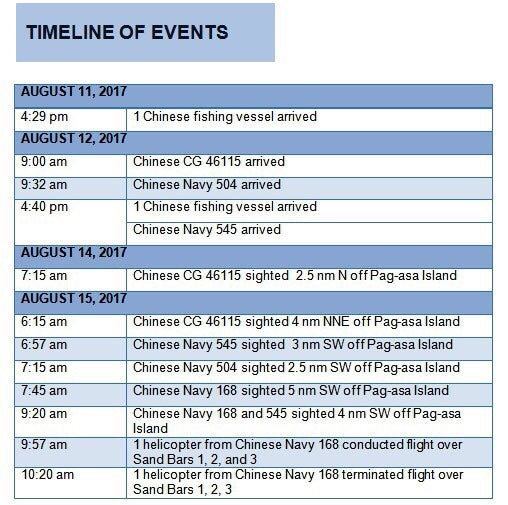 “I can’t confirm or deny because this is part of the discussion with command center but I’ll tell you continuous yan. We will tell you if this is a cause for diplomatic or a military alarm,” Cayetano said

“The presence of ships alone does not mean anything. Let me ask congressman Alejano, why are we not concerned with the US doing freedom of navigation? Ang lalaki ng ships nila (They have big ships). You know why? Because they are allies,” Cayetano added.

Cayetano said the situation in the Pag-asa island remains stable.

“While I can’t tell you the details, I can tell you the communication is there. There’s reasons for certain presence of certain vessels, but it’s the situation in the area is very stable,” Cayetano said.

Cayetano warned Alejano against portraying China as an enemy and stirring up the situation at a time the countries are negotiating to ease the tension on the disputed waters.

“If we keep looking at China as the enemy, every time may movement sila, masyado tayo nagre-react (everytime they have movement, we are exaggerating our reaction).. It’s good we have people like Congressman Alejano who reminds us to monitor the situation. But there’s a thin line between informing us and stirring up the situation,” Cayetano said.

“There is no situation there that is a cause of lowering mutual trust between all of the claimants at this point in time,” he added.

For his part, Philippine Coast Guard commodore Joel Garcia said the Chinese vessels may just be practicing freedom of navigation, which does not constitute a violation of international law.

The coast guard has also yet to verify Alejano’s allegation that a Bureau of Fisheries and Aquatic Resources (BFAR) vessel was prevented by Chinese fishing vessels from going near Pag-asa island, he added.

“As what the Secretary of Foreign Affairs mentioned earlier, if it does not affect our sovereignty, specifically the areas where we have sovereign rights, I don’t think the Chinese vessels are violating international law,” Garcia said.

Garcia also advised the public not to be “too biased” against China.

“We should not be biased against Chinese ships,” Garcia said.

Cayetano said the foreign policy of the administration is to ease the tense ties build up during the previous administration with China, at a time the Asean-member states are negotiating the draft of a Code of Conduct that would guide the activities on the South China Sea.

In a press conference Tuesday, Alejano said sources told him of a “suspicious massing up of Chinese Navy and Coast Guard and maritime militias north of Pag-asa Island, a threat to our interest in West Philippine Sea.”

“I received information from my sources in the military, stating that since three days ago, China has deployed two frigates, one Coast Guard vessel, and two large fishing vessels, with their maritime militia, one to three nautical miles north of Pag-asa Island,” Alejano said.

Alejano said he also received report two days ago, that a Philippine government vessel from the Bureau of Fisheries and Aquatic Resources (BFAR) was prevented by Chinese fishing vessels from going near the Pag-asa island.

“Further, the report said, two days ago a Philippine government ship from BFAR was prevented by Chinese fishing vessels from going near our sand bars located generally west of Pag-asa Island, around two to seven miles away,” Alejano said.

Alejano said this is a proof that Chinese vessels continue to harass Philippine fishermen despite cooler ties with China. JPV