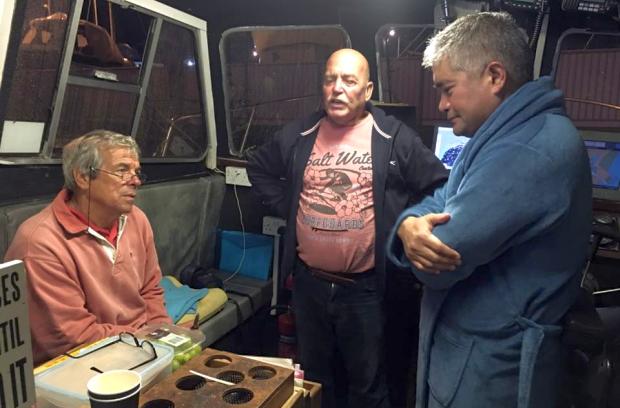 DOVER, United Kingdom — Environmental lawyer Ingemar Macarine, also known as the “Pinoy Aquaman,” was about 3.8 km (2.3 miles) from this southeastern coastal town on Sunday morning when he was made to stop because of bad weather.

“I stopped the swim really for safety grounds,” said Eric Hartley, skipper of the support boat from the Pathfinder Charter. “It’s always safety first. With this condition, it’s so easy to lose the swimmer with the swells and anything.”

Hartley said Macarine could make another attempt on Friday, Aug. 18.

If he succeeds, Macarine – an election officer in Tubigon town in Bohol – will be the first Filipino swimmer to swim across the English Channel, considered the Mount Everest for open swimming.

Many swimming enthusiasts were tracking Macarine’s progress through social media.

Macarine was up early on Sunday for his swim.

Before diving into the water, his shoulders, armpits, neck, and crotch were coated with sunblock and petroleum jelly to keep his muscles flexible and prevent chafing.

He was only wearing a latex swimming cap, an ordinary swimsuit, and goggles – the standard outfit under the rules of Channel Swimming AssocIation (CSA).

Macarine started his longest solo, unassisted swim across the English Channel, at 2:45 a.m. on Sunday, (9:45 a.m. Philippine time) from Dover.

His destination was Cap Gris Nez, a cape in northern France. The journey was expected to take 15 hours in a temperature of 16°C.

The shortest distance between England and France over the English Channel is 34 km (21 miles).

Macarine was swimming freestyle while crossing the channel.

About one hour into the swim, Macarine could vaguely make out his destination on the horizon, when he lifted his head to breathe, due to strong waves and gusty winds.

Hartley, skipper of the support boat, called off his bid when he noticed that the wind was getting stronger and colder.

With Hartley in the boat was CSA observer Keith Oiller, who detailed to Macarine the rules of the English Channel.

“Because wind was blowing, it’s hard to control the boat with the current condition,” Hartley said. “The wind speed is too strong than what was forecast at 3 knots. It’s important to keep him beside the boat.”

There have been less than half a dozen fatalities in the 137-year history of channel swimming, the CSA said.

He has been swimming seas in the Philippines and the United States.

Macarine – who has swum seas in the Philippines and the United States – had waited patiently for days to swim the Channel.

Since arriving in Dover on July 28, he has been practicing for two hours daily at the port.

Although he didn’t finish the swim, he said was satisfied with what he was able to accomplish.

Hartley said Macarine could swim on Friday if the weather would permit it.

Macarine said he would continue practicing at the Dover Port until he could make another attempt.

“I guess I will have to extend my government official leave and departure date,” Macarine. “Tuloy ang laban toward reaching that goal.” /atm

Read Next
Recto eyes ‘quick reaction fund’ for OFWs in conflict-threatened countries
EDITORS' PICK
PH detects local transmission of Omicron subvariant BA.2.12.1
OVP: Pilot’s claim vs Robredo ‘never happened’, a ‘malicious fabrication’
Petition to reverse Comelec decision on Bongbong Marcos’ DQ case reaches SC
House energy committee chair Arroyo bats for cheap electricity
Luxe property: A way to build, preserve wealth
Honolulu Café is the cure for your Egg Tarts and Roastings cravings
MOST READ
Heart Evangelista gets a ‘no’ from Chiz Escudero after asking, ‘Do I deserve a bag?’
Leni and the future of the Pink Movement
CebuPac places pilot under disciplinary review after ‘baseless’ post vs Robredo
Congress canvassing of votes for president, VP to begin May 24
Don't miss out on the latest news and information.

newsinfo
PH detects local transmission of Omicron subvariant BA.2.12.1
newsinfo
OVP: Pilot’s claim vs Robredo ‘never happened’, a ‘malicious fabrication’
newsinfo
Petition to reverse Comelec decision on Bongbong Marcos’ DQ case reaches SC
newsinfo
House energy committee chair Arroyo bats for cheap electricity
business
Luxe property: A way to build, preserve wealth
pop
Honolulu Café is the cure for your Egg Tarts and Roastings cravings
entertainment
Heart Evangelista gets a ‘no’ from Chiz Escudero after asking, ‘Do I deserve a bag?’
May 17, 2022
opinion
Leni and the future of the Pink Movement
May 17, 2022
newsinfo
CebuPac places pilot under disciplinary review after ‘baseless’ post vs Robredo
May 17, 2022
newsinfo
Congress canvassing of votes for president, VP to begin May 24
May 17, 2022
newsinfo
Man posing as Marcos spox revealed to be an inmate in Bilibid — Guevarra
May 17, 2022
newsinfo
Marcos DQ petitioners told: ‘Learn to respect will of the Filipino people’
May 17, 2022