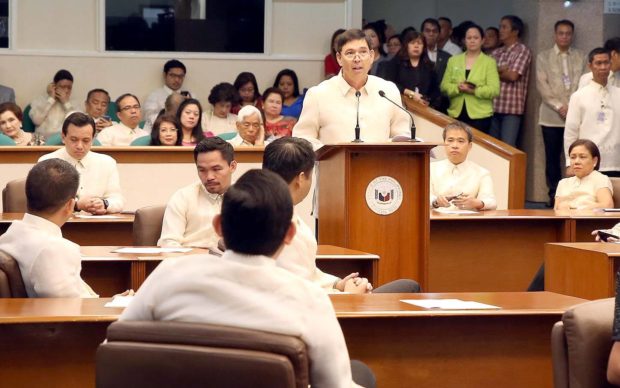 A “quick reaction fund” should be given to Philippine embassies in conflict-threatened countries to safeguard Filipinos once a crisis becomes full-blown, Senate President Pro Tempore Ralph Recto said on Sunday.

“Contingencies must be arranged not after but before an emergency,” Recto said, following North Korea’s plans to conduct airstrikes against Guam, a territory of United States (US), which is roughly 2,500 kilometers away from Manila.

“There should be provisions for safe havens and secure escape routes,” the senator said. “Our foreign posts must be given the capacity to make the arrangements. Hindi lang hanggang plano at (not just plans and) advisories.”

Recto called for the creation of a “contingency fund” within the budget of the Department of Foreign Affairs (DFA) which can be tapped by embassies where the threat of violence or war is high.

“The operating budget of these embassies and consulates must be augmented,” he said. “When there is a crisis to prepare for, their resources must be increased.”

He cited the case of the proposed budget of the Philippine Embassy in Seoul, the South Korean capital located about 56 kilometers from its border with North Korea.

For 2018, the embassy in Seoul had a proposed budget of P109 million, or about $2 million, for one whole year in one of the world’s most expensive cities, Recto said.

(“Even at peace, this is not enough to cover the many Filipinos there. What more if a crisis happens?”)

The senator said an increased budget for the embassy in Seoul would be justified by the fact that Filipino workers in South Korea currently send about P1 billion a month to the Philippines.

(“So in every P100 remittance, the government only gives back P1 worth of consular services.”)

By latest count, there are 57,082 documented and about 11,828 undocumented Filipinos in South Korea, he said.

Recto said Bangko Sentral ng Pilipinas data showed that there was even money remitted from North Korea in 2016, in the amount of P96,915.

In calling for a quick reaction fund for Philippine diplomatic offices in danger areas, Recto said the DFA’s assistance to nationals (ATN) fund of P400 million for 2017 “which is for all posts worldwide, is not enough.”

Compared to what overseas Filipinos workers contribute to the country, Recto said the funds and services provided to them are insufficient.

On top of the ATN fund is a P100 million legal assistance fund to OFWs in trouble with the law in their host countries.

According to Recto, the combined P500 million fund “is mere 4 hours worth of all OFW remittances” in 2015, using as basis the $28.48 billion remittances sent to the Philippines two years ago.

(“The P500 million is equivalent to the remittances of OFWs from Hong Kong in just four days and five hours. P500 million is also what OFWs in Italy alone remit to their homeland in just 12 days.”) /atm