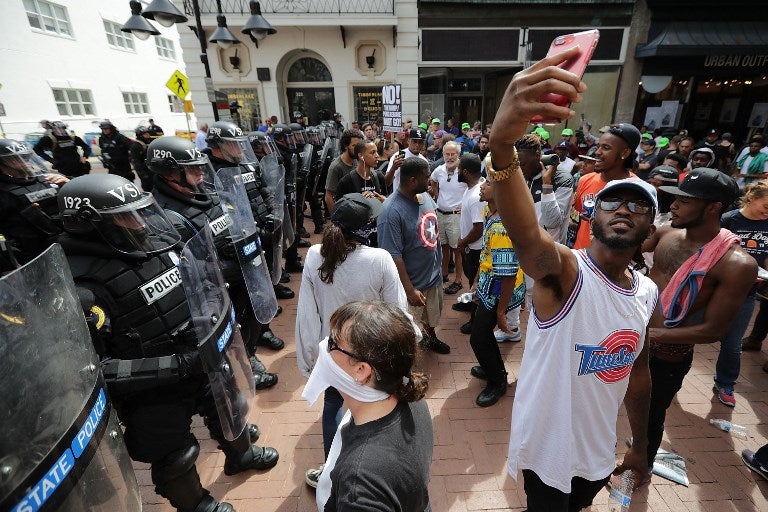 Members of the Virginia State Police wear body armor and riot shields while standing guard on the pedestrian mall following violence at the United the Right rally August 12, 2017 in Charlottesville, Virginia. Gov. Terry McAuliffe declared a state of emergency after white nationalists, neo-Nazis and members of the “alt-right” violently clashed with anti-facist and Black Lives Matter counter-demonstrators at Emancipation Park. Chip Somodevilla/Getty Images/AFP

The Philippine government on Sunday said that while no Filipinos were reported hurt during protests in Virginia, it continues to monitor the situation.

“The Philippine Embassy in Washington DC is closely monitoring the situation in Charlottesville, Virginia, after a state of emergency was declared there following violent clashes between opposing groups of demonstrators that left one person dead and at least 19 others injured,” the Department of Foreign Affairs said in a statement.

A car plowed through a group of protesters in Charlottesville on Saturday. The crowd was protesting against white nationalist demonstrators.

DFA said Foreign Affairs Secretary Alan Peter S. Cayetano was already informed by Embassy Charge d’Affaires Patrick Chuasoto that “no Filipino has been reported among the injured or arrested as a result of the violence.”

Cayetano was quoted saying that police will notify foreign embassies if foreign nationals are involved.

“The Embassy, at the same time, urged Filipinos in Charlottesville, which is home to the University of Virginia, and neighboring areas to stay indoors and avoid large gatherings of people,” DFA said.

There are around 125 Filipinos in Charlottesville, which is located 117 miles southwest of Washington, the Embassy said. JE