And only a few people who try this succeed.

Environmental lawyer and triathlete Ingemar Macarine, who earned the moniker “Pinoy Aquaman” will try to be the first Filipino swimmer to cross the channel that separates the United Kingdom and France.

But it would not be an easy swim.

Macarine, who has been swimming to promote clean seas, Philippine tourism and international friendship, had spent two hours every day since he arrived in the United Kingdom on July 30 to practice as he hoped to complete the 21-mile (34 km) swim in under 15 hours.

But the wind and weather are expected to be a problem – as the Dover Straits are prone to local weather conditions that can change very quickly and which do not match the forecasts.

The water is nearly freezing at 15-16 degrees Celsius although Britons have anticipating summer this month.

“I have been training at the Dover Harbor for two hours every day. The water temperature is around 16 degrees so it is very cold compared to the Philippines where I trained in the 30 degree water temperature,” said Macarine.

Hypothermia is an issue for swimmers, and swimmers are unclothed and exposed to the elements unlike any other endurance athlete.

“Hypothermia would be my number one challenge as I am used to the tropical waters of the Philippines,” said Macarine.

There are a lot of factors that combine to make the swim hard but the cold is the biggest hurdle, said Eric Hartley of the Pathfinder Charter and Channel Swimming Association (CSA) observer Keith Oiller. Swimmers said that it’s not about the distance since lot of people can swim but the cold water.

CSA requires swimmers to attempt the challenge clad in nothing more than ordinary swimming trunks, swim cap, and goggles. Wetsuits and other floating devices are absolutely not allowed.

The rules also dictate that a swimmer should not touch the boat nor can be touched by another person during the entire course of the swim.

Last Tuesday, a man died during an attempt to swim the English Channel as part of a grueling triathlon.

Newspapers reported that Douglas Waymark, 44 from Cheltenham, got into difficulty about half way across, 12 nautical miles from Dover.

Oiller said the tides are also hard to predict as they are strong and change direction about every six hours.

They also change in height and flow speed every day.

There is also the problem of the number of ships using these waters – because to go from England to France you have to swim across the shipping lanes.

Ever since Captain Matthew Webb’s first successful Channel swim in 1875, thousands of swimmers have attempted to emulate his feat. 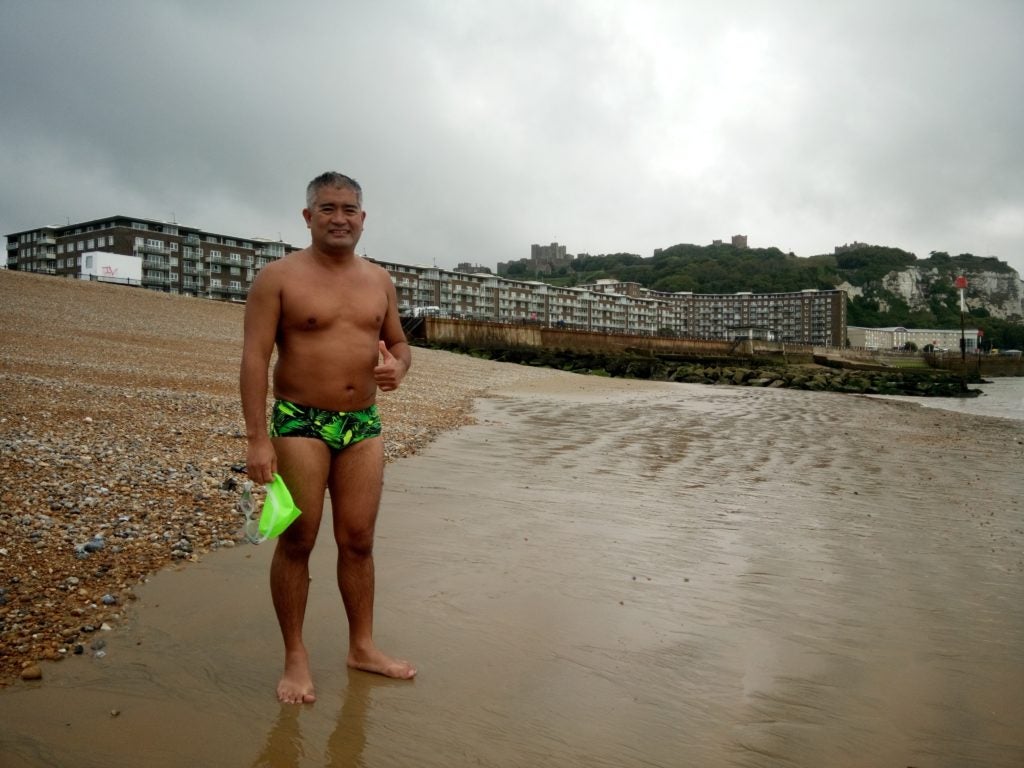 Environmental lawyer Ingemar “Pinoy Aquaman” Macarine will be the first Filipino swimmer to attempt to swim the English Channel which is considered as the “Mt. Everest” of swimming on Sunday (Philippine time). Leo Udtohan/Inquirer

Most are content to complete the swim, others are determined to set new records.

It all started in 1872 when JB Johnson tried to swim the Channel, but failed, abandoning his attempt after 1 hour and 3 minutes.

Since then, interest has grown in Channel swimming, and there is always a waiting list of people booking places with pilots from the CSA and the Channel Swimming and Piloting Federation in the hope of adding their names to the list of those who achieve it.

*First recorded crossing of Channel was by an Italian prisoner-of-war in 1817; Giovan Maria Salati made his escape from a prison barge in Dover and swam to Boulogne using straw as a buoyancy aid.

*Captain Matthew Webb made the first unassisted and observed cross-channel swim in 1875; he made landfall in 21 hours and 45 minutes.

*In 1926, the American Gertrude Ederle (pictured) became first woman to swim the Channel – her time was 14 hours and 34 minutes.

*The record for fastest-ever cross-channel swim is held by the Australian Trent Grimsey, who managed six hours and 55 minutes in 2012.

*King of the English Channel is Kevin Murphy, with 34 solo crossings.