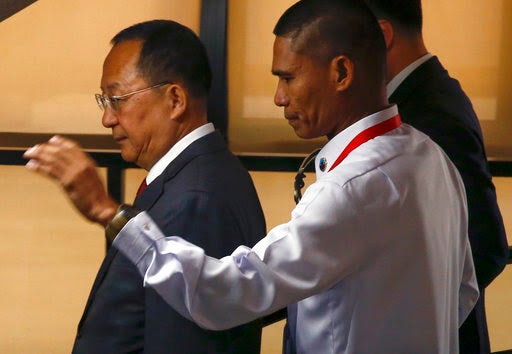 Pyongyang on Monday assured the world that it would not use its nuclear weapons against any other country, but with a caveat – unless they join the US in its attacks against the isolated communist state.

Ri ignored reporters’ questions, while a staff distributed his statement translated in Korean and English during Monday’s 24th Asean Regional Forum (ARF) which served as a venue for North Korea to have dialogue with the Asean and its partner countries the United States, South Korea, and Japan.

In the statement delivered during the ARF, Ri said Pyongyang is propping up its nuclear defense program to prepare itself from US hostilities.

Ri chided the Asean for rebuking North Korea’s nuclear and ballistic missiles program, but turning a blind eye to US hostilities toward the DPRK.

Ri said Pyongyang will only train its rockets on other countries if these participate in the US military action against North Korea.

The Philippines is a key US ally on joint military exercises.

“We have no intention to use nuclear weapons or threaten with nuclear weapons against any other country except the US, unless it joins military action of the US against the DPRK,” Ri said.

Ri then went on to slam US President Donald Trump’s “America First” policy and for US attempts to “internationalize” the nuclear issue through the United Nations by posing North Korea as a threat to world stability.

He said the US is so desperate to stop North Korea’s nuclear program that it even sent Secretary of State Rex Tillerson just to pressure the Asean to exclude North Korea from the ARF.

“The US is trying to internationalize the nuclear issue of the Korean peninsula by abusing the UN while clamoring that the DPRK’s possession of nuclear weapons is a ‘global threat.’ It is an unreserved expression of the ‘America First’ policy to hide its responsibility for and the essence of the issue which is thoroughly a matter between the DPRK and the US and to satisfy its own interest at the expense of others,” Ri said.

“Due to this fatal weakness of the ‘sanctions resolutions’ of the UN Security Council, the US is so much anxious and uneasy as to mobilize even the President and the Secretary of State as well as its Ambassadors in an attempt to pressure other countries,” he added.

In an ambush interview with reporters at the Manila Bay Hotel, Bang Kwang Hyuk, spokesperson for the North Korean ARF delegation, said Pyongyang will not change its mind about developing its nuclear defense against the US.