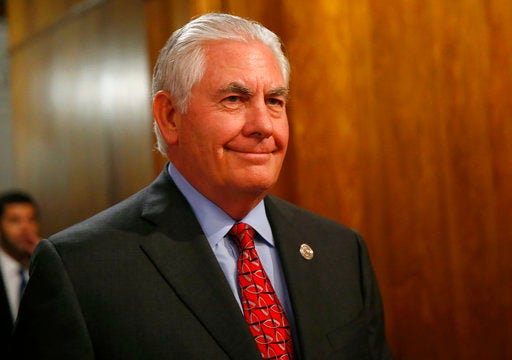 Duterte and U.S. Secretary of State Rex Tillerson sat down for a meeting while the American was in Manila for a regional Asia gathering. It was the highest-level interaction to date between a member of President Donald Trump’s administration and Duterte, accused by human rights groups of flagrant abuses in his bloody war against illegal drugs.

If the two leaders discussed those or other U.S. concerns about Duterte’s government, they didn’t do so in public. Instead, the two focused on the alliance between the two countries and on the North Korea issue as reporters were allowed in briefly for the start of their meeting.

Entering an ornate, wood-paneled hall in the Philippine leader’s palace, Tillerson was introduced to members of Duterte’s Cabinet, shaking hands with each. Duterte welcomed the American and said he said he knew the U.S. was concerned about Pyongyang’s missile program.

“You come at a time when I think the world is not so good, especially in the Korean Peninsula,” Duterte said. Earlier, as they shook hands, the two ignored a shouted question about whether they’d discuss human rights.

But Duterte’s presidential spokesman, Ernesto Bella, said ahead of the meeting that the topic would indeed come up, along with other pressing matters such as global terrorism threats, economic cooperation and security in Marawi, the city that has been under siege by pro-Islamic State group militants for more than two months.

“We also welcome the opportunity to address concerns such as human rights if and when raised,” Bella said in a statement. “We have always included this issue in our discussions and engagements with foreign governments, particularly Western democracies.”

The U.S., too, said ahead of the meeting that human rights would be among the topics on the agenda.

Human rights groups have questioned the Trump administration’s willingness to engage with Duterte. But Tillerson argued there’s no contradiction presented by the U.S. decision to help his country fight the militants, whose insurgency in the Philippines has stoked global fears about the Islamic State group exporting violence into Southeast Asia and beyond.

Nearly 700 people have died in the intense fighting, including 528 militants and 122 soldiers and policemen, since hundreds of black flag waving gunmen stormed into buildings and homes in the business district and outlying communities of mosque-studded Marawi, a center of Islamic faith in the southern third of the predominantly Roman Catholic nation.

“I see no conflict – no conflict at all in our helping them with that situation and our views of the human rights concerns we have with respect to how they carry out their counter narcotics activities,” Tillerson told reporters before the meeting. He added that it appeared the Philippines was “beginning to get that situation under control.”

To that end, Tillerson said the U.S. has been providing the Philippines with surveillance capabilities, training, information and aircraft to help it fight the militants. He said the equipment includes a few Cessna aircraft and a few drones.

“The real challenge is going to come with once they have the fighting brought to an end how to deal with the conditions on the ground to ensure it does not re-emerge.”