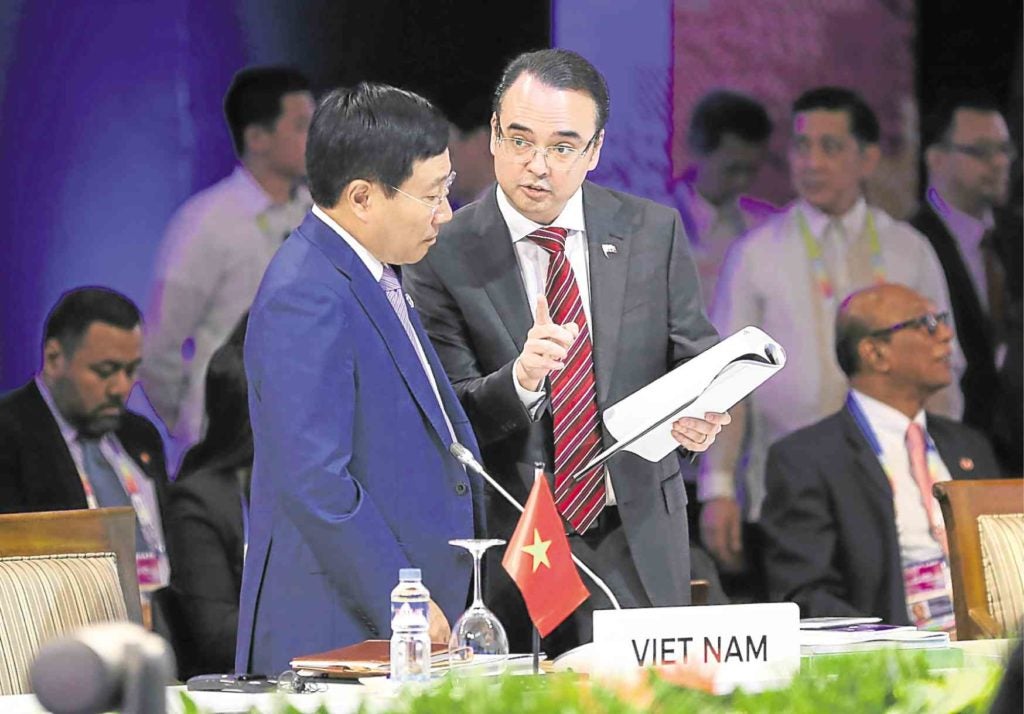 Vietnam has made a bold move against China at the annual foreign ministers’ meeting of the Association of Southeast Asian Nations (Asean) and pushed for a stronger stand against Chinese expansionism in the South China Sea.

Hanoi made its move in unscheduled and informal talks late on Friday night when it asked to insert tough language against Beijing in the usual communique that  the regional bloc releases after top-level meetings.

The communique had not been released at press time, but according to a copy of a draft obtained by Agence France-Presse (AFP), Vietnam lobbied for the Asean to express “serious concern” over China’s ramped-up construction of artificial islands in the disputed waters.

Vietnam also wanted the Asean to insist in the communique that the planned code of conduct in the South China Sea among claimant-nations be legally binding, which Beijing opposed.

“The discussions were really hard. Vietnam is on its own to have stronger language on the  South China Sea. Cambodia and the Philippines are not keen to reflect that,” one diplomat involved in the talks told AFP.

Alongside Vietnam, the Philippines used to be the most vocal critic of Beijing’s expansionism.

But under President Rodrigo Duterte, the Philippines has sought to downplay the dispute with China in return for billions of dollars in Chinese investments and aid.

China has in recent years also successfully lobbied other Asean nations, particularly Cambodia, to support its diplomatic maneuvering in the dispute.

Various diplomats said Vietnam was likely to lose its battle to insert the strong language against China, with the Philippines as host of the talks wielding greater influence.

The bloc instead released a separate statement strongly urging North Korea to comply with UN resolutions on its nuclear tests and program.

The Asean is set this weekend to adopt a framework for a code of conduct with China, which is meant to pave the way for more concrete action.

But security analysts point out that the framework comes 15 years after negotiations on the issue first began, and China has used that time to cement its claims with the artificial islands.

Hanoi made its move at the Asean meeting a day after it suspended a gas-drilling project in the South China Sea that it had earlier approved but was said to have irritated Beijing.

The project, involving a subsidiary of the Spanish energy company Repsol, started in June off the southern Vietnamese coast, analysts said.

The offshore block where the drilling was occurring straddles the border of Vietnam’s 200-nautical-mile exclusive economic zone but is challenged by China.

Analysts say the project’s suspension, which Repsol confirmed to Reuters on Wednesday, appears to be another strategic victory for China.

It also highlights the difficulty that Hanoi faces as it mounts challenges to Beijing’s claims to the South China Sea — without much help from its neighbors in Southeast Asia or from Washington.

Vietnam’s leaders “can try their best to deter the Chinese” in the South China Sea, said Gregory B. Poling, a fellow in the Southeast Asia program at Center for Strategic and International Studies in Washington.

“But when the Chinese push back hard, like they just did, the Vietnamese are out on a limb all by themselves,” he said.

In an e-mailed response to questions about the Repsol project and Vietnam’s strategic priorities in the South China Sea, Le Thi Thu Hang, a spokesperson for Vietnam’s foreign ministry, said the country supported the settlement of any disputes in the sea by peaceful means and according to international law.

“Vietnam calls on relevant parties to respect the legitimate rights and interests of Vietnam and make positive and practical contributions to peace and cooperation in the East Sea,” she said, using the Vietnamese term for the South China Sea.

Unlike the Philippines and Japan, Vietnam is not a treaty ally of the United States, meaning Washington is not legally obligated to protect it in the event of an attack.

Poling said Hanoi found itself isolated on South China Sea policy in part because it was unsure how the Trump administration would react if a conflict escalated there.

“I think it’s fair to say the Vietnamese are still not entirely confident” that the administration cares about the South China Sea  the way that the Obama administration did, he said.

Vietnam’s strategic isolation worsened as the Philippines warmed to China since Mr. Duterte came to power in June 2016.

In July last year, the Philippines won a landmark case when an international tribunal ruled that Beijing’s claim to sovereignty over most of the sea had no legal basis.

Vietnam saw the ruling as a giant step toward its decadeslong goal of creating a unified diplomatic front against Chinese territorial encroachment in the South China Sea.

But Mr. Duterte appeared to undercut the victory last year by saying  he favored direct talks with China over territorial disputes.

Eufracia Taylor, a political analyst based in Singapore at the British risk consultancy Verisk Maplecroft, said that while Vietnam and the Philippines were once “in the same boat” on South China Sea policy under Mr. Duterte’s predecessor, President Benigno S. Aquino III, bilateral relations had deteriorated since Mr. Duterte took office. —Reports from AFP and New York Times

Read Next
Asean diplomats agree to extend nuclear weapon-free zone treaty
EDITORS' PICK
Is it safe to talk politics again at family gatherings? ‘The Reconciliation Dinner’ shows us what that’s like
The Best Tech Gifts For The 2022 Holidays
Pagasa: Warm, sunny Sunday in most parts of PH
House energy committee chair Arroyo bats for cheap electricity
EDITORIAL: To a bike-friendly future
vivo’s coming to town to grant wishes with more holiday promos
MOST READ
LOOK: Vhong Navarro transferred to BJMP detention facility in Taguig
The Elephant Man in the Senate
Posh village as ‘shabu’ haven
LOOK: Zanjoe Marudo bonds with Ria Atayde, her family
Don't miss out on the latest news and information.