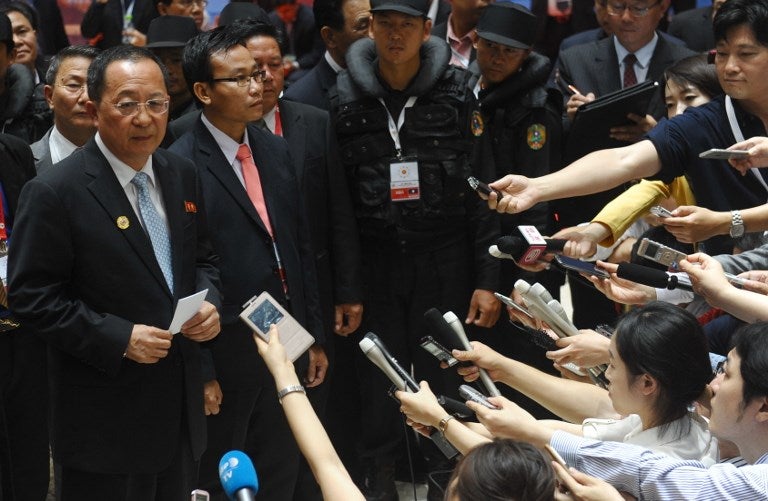 Washington is seeking talks on how North Korea can be suspended from Asia’s biggest security forum as part of a broader effort to isolate Pyongyang diplomatically and force it to end its missile tests and abandon its nuclear weapons program, U.S. and Philippine officials said.

Acting Assistant Secretary for East Asian and Pacific Affairs Susan Thornton told reporters in Washington on Wednesday that North Korea’s actions have violated the conflict-prevention aims of the Asean Regional Forum (ARF), which groups the United States and North Korea with 25 other countries.

The Philippines is hosting an annual ministerial meeting on Monday of the 27-nation ARF which will be attended by U.S. Secretary of State Rex Tillerson and North Korean Foreign Minister Ri Yong Ho. Tillerson has no plans to meet Ri on the sidelines of the meeting, Thornton said. With the U.S., Japan and South Korea expected to push for stronger actions against the North, a verbal showdown looms at the forum.

“What we have been sort of looking at is having a serious discussion of what it would take for a member to be suspended from this organization that is dedicated to conflict prevention and preventive diplomacy,” Thornton said. “I think we’re going to continue to have that conversation as it regards North Korea.”

“What we’ve been doing is going around talking to partners about what more could they do to contribute to that increasing pressure on the regime and the increasing sort of diplomatic isolation of the regime,” she said.

Two Filipino officials told The Associated Press that U.S. officials have discussed such a prospect with Philippine officials, who told them it may be better to keep North Korea in the forum, where it can be persuaded to stop provocations through dialogue.

A North Korean delegation led by its vice foreign minister flew to Manila last week and told Philippine officials of their hope for a “favorable environment” when Pyongyang’s top diplomat attends the ARF meetings in Manila, said the officials, who spoke to AP on condition of anonymity because they were not authorized to discuss the matter publicly.

In response, the Philippine officials told the North Koreans they could not guarantee that because other member states, like South Korea, Japan and the United States, would definitely raise alarm over Pyongyang’s continued missile tests. They asked the delegation why North Korea staged an intercontinental ballistic missile test last week, days before the ARF meeting, and then expected not to be confronted by other nations over it, the officials said.

While it may be too late for Pyongyang to be barred from the ARF meeting this year, Thornton said Washington would continue to “push the organization to think about what kinds of suspension measures or requirements or stipulations might be included in the future.”

Foreign ministers of the 10-member Association of Southeast Asian Nations, or Asean, will express grave concerns over the North’s continuing missile tests when they meet on Saturday ahead of the ARF meeting, according to a draft of their joint communique to be issued after the Asean meeting.

Founded in 1993 by Asean foreign ministers, the ARF aims to foster dialogue and consultation on political and security concerns among Asia-Pacific nations.

Like Asean, the ARF decides by consensus, meaning any initiative can be rejected by just one opposing member, a principle that can possibly hamper any U.S. move against North Korea if the latter would be backed up by countries like China. CBB

Sex, the City, and Two Popes