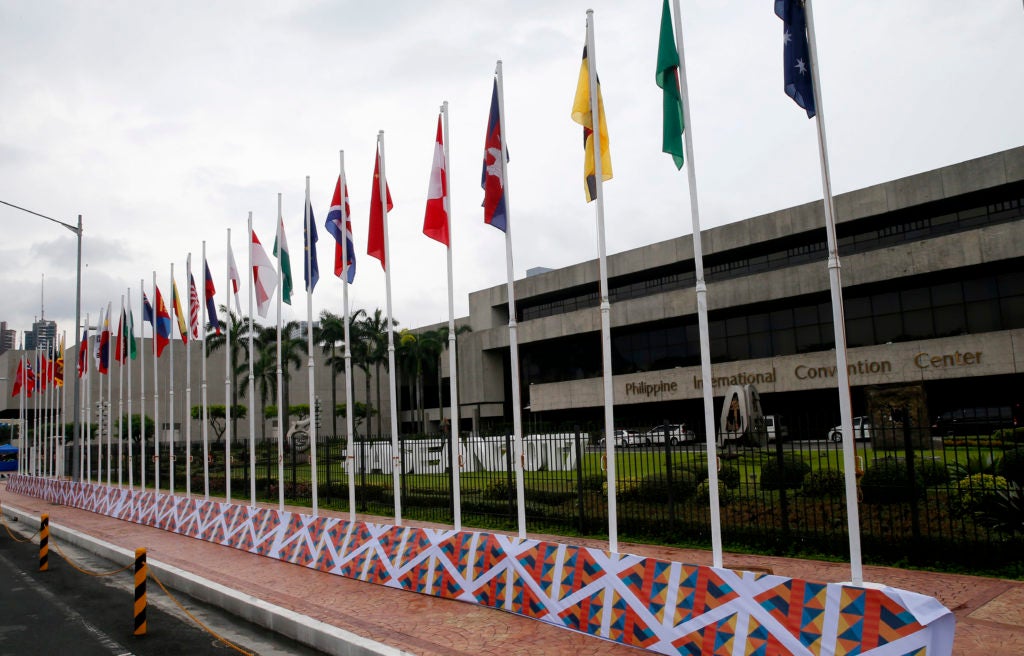 Southeast Asia’s top diplomats will seek talks “as soon as possible” on a proposed nonaggression pact with China aimed at preventing rival claims in the South China Sea from erupting into conflict and will likely hold back on criticism of China’s aggressive acts in the heavily disputed waters during their summit in Manila this weekend.

An initial draft of a joint communiqué to be issued by the Association of Southeast Asian Nations (Asean) foreign ministers seen by reporters on Wednesday says they would ask senior diplomats to immediately initiate talks on a code of conduct in the South China Sea after their governments agreed on a framework of the accord with China in May.

The Asean ministers will ask their senior diplomats “to begin earnest discussions on a substantive and effective code of conduct on the basis of the framework as soon as possible,” according to the draft communiqué.

The long-seething territorial disputes in the South China Sea, alarm over North Korea’s missile tests and the rise of Islamic radicalism in the region amid a deadly siege by Islamic State-inspired local terrorists in Marawi City are expected to grab the spotlight in the meetings of Asean foreign ministers and their Asian and Western counterparts starting Saturday.

US Secretary of State Rex Tillerson, who is traveling to the region this week, will attend the Asean summit, the US state department said on Tuesday.

China claims almost all of the South China Sea, but Asean members the Philippines, Brunei, Malaysia and Vietnam also have claims in the strategic waterway crisscrossed by vital sea-lanes through which $5 trillion in global trade passes every year.

In the middle of the sea is the Spratly archipelago, where islets, reefs and atolls are believed to be sitting atop vast energy reserves.

To bolster its claims, China has built artificial islands on seven reefs in the Spratlys and topped them with runways that can receive large military planes, radar installations and missile defense systems, drawing criticism of militarization from its rival claimants and the United States.

The draft communiqué, however, does not criticize China for its aggressive actions in the South China Sea.

The draft instead highlights the progress in the nearly 2-decade-long negotiations for a legally binding code of conduct for all the claimants that seeks to prevent the competing claims from erupting into clashes at sea.

“Pending the conclusion of a substantive [code of conduct], we reaffirm the importance of maintaining peace, stability, security and freedom of navigation and overflight in and above the South China Sea,” the draft statement says.

Without referring to China by name, the Asean foreign ministers call for “self-restraint,” avoidance of “unilateral actions” and pursuit of “mutally agreed practical maritime areas of cooperation” in the waterway.

Robespierre Bolivar, the spokesperson for the Department of Foreign Affairs (DFA), described the initial progress after yearslong efforts by Southeast Asian countries to negotiate a code of conduct with China “as a very big step.”

The Asean foreign ministers will endorse the framework for the code of conduct that their governments approved in Guiyang, China, on May 18.

The Associated Press reported on Wednesday, however, that a final copy of the framework it had seen did not mention whether the code of conduct should be legally binding, which most Asean states demand but China opposes, or the extent of disputed areas to be covered by such a code.

The code will not serve as a tool to settle territorial disputes, according to the framework. —With reports from the wires