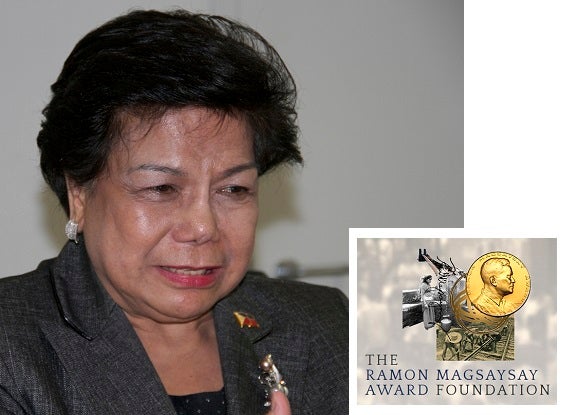 Lilia de Lima, former head of the Philippine Economic Zones Authority, has been named as one of six winners of the prestigious Ramon Magsaysay Award. INQUIRER FILE

Former Philippine Economic Zone Authority (Peza) director general and trade undersecretary Lilia B. de Lima was chosen as one of the six recipients of the prestigious Ramon Magsaysay Award this year.

The four other awardees are former president of Sophia University in Japan, Yoshiaki Ishizawa for “restoring Cambodia’s treasured gift to world culture;”

Abdon Nababan, a Toba Batak from Sumatra, Indonesia, for “giving compelling face and voice to Adat communities and their rights;”

Gethsie Shanmugam of Sri Lanka for “rebuilding lives from the psychological wounds of war and violence;”

and Tony Tay of Singapore for “mobilizing collective goodwill to address hidden hunger.”

As the first director general of Peza, De Lima was credited for her key role in the country’s shift in the 1990s to a liberalized, export-led, competitive growth economic policy.

Under her helm for over 21 years, Peza became “a showcase of successful regulatory reform, a model institution of honest and committed public service, and a key contributor to the nation’s economic growth,” according to the Ramon Magsaysay Award Foundation.

“In electing Lilia B. de Lima to receive the 2017 Ramon Magsaysay Award, the board of trustees recognizes her unstinting, sustained leadership in building a credible and efficient Peza, proving that the honest, competent and dedicated work of public servants can, indeed, redound to real economic benefits to millions of Filipinos,” the citation read.

De Lima was born in Iriga City, Camarines Sur, and raised in a family of public servants. A lawyer, she pursued a career in government, serving in various senior assignments until she was asked to serve as Peza’s first director-general in 1995.

“Her first challenge was to regain the trust of investors grown skeptical of the country’s institutional capability and political will to spur economic growth,” the Foundation said in the citation.

“Bucking tremendous pressures and threats, Director-General de Lima single-mindedly pursued a program of reform: she determinedly halved the bloated 1,000-person bureaucracy she had inherited from a system of political patronage; she developed Peza’s work culture into one marked by honesty, efficiency and—quite literally—one-stop, nonstop service,” it declared.

“Under Lilia de Lima’s leadership, Peza enabled the rise of the Philippines as one of the region’s top investment destinations,” it went on.

Among the “radical policies” she instituted were a shift from government-financed to private sector-led ecozone development; streamlined 24/7 Peza operations to reliably service global locators; investor-friendly regulations, purposeful interagency partnerships, and strengthened relations with local governments in the ecozones.

“During her term, Peza’s accomplishments have been nothing short of spectacular,” the Foundation said.

During de Lima’s tenure, the number of Peza ecozones increased 2,000 percent, from the initial 16 she inherited to 343 by 2016; the number of registered enterprises rose from 331 to 3,756; investments reached P3 trillion; and ecozone exports totaled $629 billion.

Peza remitted to the national treasury P16.6 billion in corporate income taxes and dividends, and paid off the P4.6 billion debt of its predecessor agency.

Peza also generated, in direct and indirect employment, some 6.3 million jobs for Filipinos.

“In a world where there is rampant cynicism and real pain about how governments function, examples of public servants like de Lima and her Peza team are especially impressive. And yet, reflecting on her career, she says: “I cannot solve the problems of the world but if in my own little area I can make a difference, then I must make that difference.” For all workers in government, it is a credo to follow,” the Foundation said.

The awards ceremony will be held on August 31 at 4 p.m. at the Cultural Center of the Philippines. CBB/rga