Cayetano: Venture with China to comply with Constitution 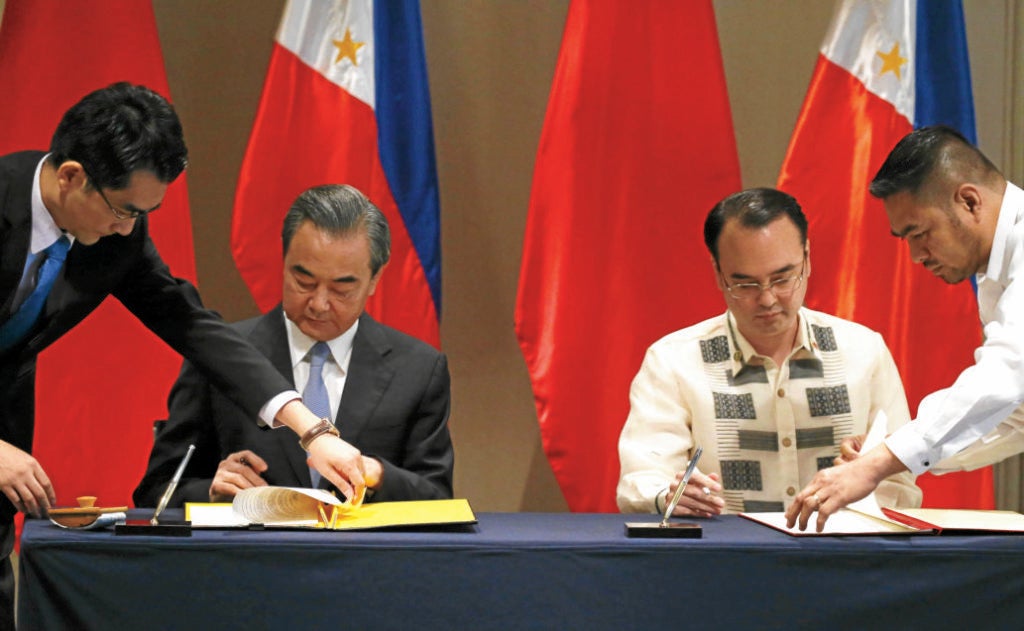 Foreign Secretary Alan Peter Cayetano gave assurance on Wednesday that a planned joint exploration for energy in the West Philippine Sea would comply with the Constitution’s requirements for foreign ownership and with other Philippine laws.

Cayetano also tried to reassure Southeast Asian neighbors that the Philippines would consult them about the joint exploration for oil in the heavily disputed South China Sea.

On Monday, President Duterte said his administration was in talks with a partner over joint drilling for natural resources in the West Philippine Sea, waters within the Philippines’ 370-kilometer exclusive economic zone (EEZ) in the South China Sea.

Mr. Duterte did not name the partner but on Tuesday, Chinese Foreign Minister Wang Yi, who was visiting Manila, said China was open to the idea of a joint venture with the Philippines for oil exploration in the South China Sea.

But Supreme Court Senior Associate Justice Antonio Carpio said on Wednesday that Mr. Duterte could not yield any part of the Philippines’ EEZ to China in a bid to foster better relations with Beijing.

“The President cannot cede or waive any part of the nation’s EEZ to China, especially now that an Unclos (United Nations Convention on the Law of the Sea) tribunal has affirmed that the Philippines’ EEZ in the West Philippine Sea does not overlap with China’s maritime entitlements,” Carpio said in a text message to the Inquirer.

Carpio was referring to the Permanent Court of Arbitration’s ruling last year that China’s claims to almost all of the South China Sea had no legal basis and that it had violated the Philippines’ sovereign rights to fish and explore resources in waters within its EEZ.

Mr. Duterte has played down the ruling in favor of billions of dollars in trade and investment from China.

Cayetano told reporters on Wednesday that negotiations for a joint venture were going on, but he declined to give details.

Pressed for more information, Cayetano said the talks were still in the exploratory stage.

“I cannot go into details because it’s a negotiation process. But I can tell you the parameters, which are simple: Any agreement has to be in conformity with the Constitution and local laws and any agreement will not give up a single inch of our territorial integrity,” he said in a news conference held on the sidelines of the Association of Southeast Asian Nations (Asean) Mayors Forum in Taguig City.

Cayetano said the Philippines would also consult its Asean neighbors about the proposed joint venture. —WITH REPORTS FROM MARLON RAMOS AND AFP