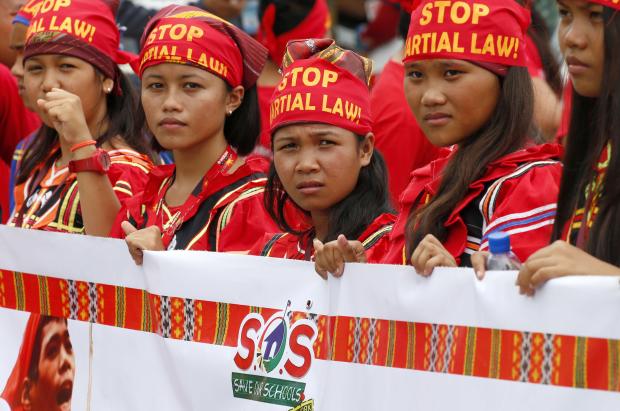 In this photo, taken Monday, July 24, 2017, young Lumads – that is, members of one of the non-Muslim indigenous groups in Mindanao – display a banner during a march of thousands of protesters to coincide with the second State of the Nation Address of President Rodrigo Duterte in Quezon City. (Bullit Marquez / AP)

Human rights groups asked President Rodrigo Duterte on Wednesday to retract a threat to order airstrikes against tribal schools he accused of teaching students to become communist rebels, warning such an attack would constitute a war crime.

US-based Human Rights Watch said international humanitarian law “prohibits attacks on schools and other civilian structures unless they are being used for military purposes,” adding that deliberate attacks on civilians, including students and teachers, “is also a war crime.”

Left-wing Rep. Emmi de Jesus of the Gabriela Women’s Party asked Duterte to retract the threat, saying government troops might use it as a pretext to attack indigenous, or Lumad, schools and communities in Mindanao, which have come under threat from pro-military militias in recent years.

Angered by recent communist rebel attacks on government forces, including a road gunbattle last week that wounded five members of his elite Presidential Security Group (PSG), Duterte has called off peace talks with the Maoist guerrillas and threatened their perceived sympathizers.

In a televised news conference he called late Monday shortly after delivering his second State of the Nation Address, Duterte condemned the insurgents for destroying bridges and torching schools in the countryside.

But he said that the insurgents were sparing Lumad schools, which he alleged were operating under rebel control without government permits.

“Get out of there, I’m telling the Lumads now. I’ll have those bombed, including your structures,” Duterte said. “I will use the armed forces, the Philippine Air Force. I’ll really have those bombed … because you are operating illegally and you are teaching the children to rebel against government.”

Carlos Conde of the Human Rights Watch said that Duterte, by calling for an attack on schools, “is directing the military to commit war crimes.”

Conde urged Duterte to sign a 2015 international political statement, the Safe Schools Declaration, that commits government to support the protection of students, teachers and schools in times of armed conflict.

Duterte ascended to the presidency last year after campaigning on his extra-tough approach on crime as a prosecutor and later as mayor of southern Davao city. He has remained popular despite thousands of deaths in his nationwide anti-drug crackdown, and his continuing popularity and the ineffective opposition have apparently emboldened him.

On Monday night, Duterte also called for abolishing the Commission on Human Rights, an independent agency created under the constitution to investigate rights violations.

He demanded that the commission and the ombudsman – an anti-graft prosecutor – route requests to investigate police and military personnel through him and laid down conditions under which he would allow those investigations.

Duterte said if the ombudsman failed to address atrocities committed by insurgents, “then do not investigate my army and police.”

Junance Fritzi Magbanua, an administrative officer of the Mindanao Interfaith Foundation Inc. that runs indigenous schools in the south, said that Duterte’s threats have heightened fear among the Lumad people already feeling the brunt of attacks by the military and security forces of big mining companies because of their resistance to mining. The military has denied involvement.

“The words uttered by President Duterte are frightening because they give a go-signal to the armed forces to bomb our schools,” said Magbanua.

Magbanua is among 300 teachers, students and parents who have traveled to Manila days before Duterte’s speech in Congress to protest and file complaints before the Commission on Human Rights for alleged shootings and military encampments in indigenous schools.

She said there are around 200 Lumad schools in Mindanao, with around 4,000 students and 88 teachers. One campus has been recognized by the Department of Education, while the rest have been issued permits to operate, she added.

Magbanua said the indigenous schools follow government’s curriculum but have added a subject called ancestral land to teach students to value their home region. She denied they teach students to become communist rebels.

“We only hold chalk, ballpen and paper,” she said. “If (Duterte) wants to find out, he should come to our school and observe.”

Save Our Schools Network, a non-government group advocating children’s right to education, said there have been at least 68 military attacks affecting 89 Lumad schools since July last year. /atm