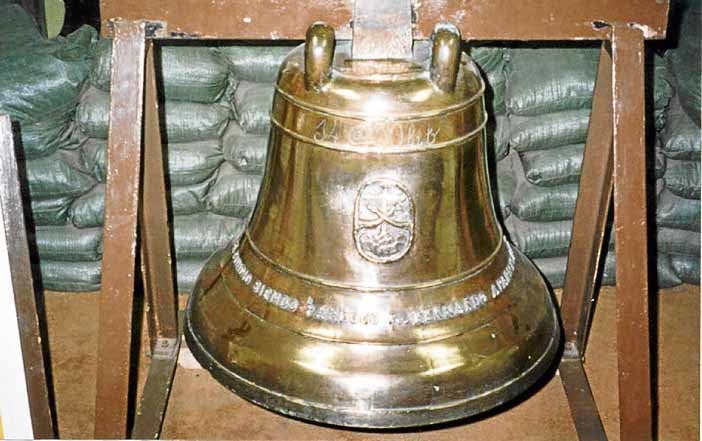 PHILIPPINE HERITAGE The Balangiga bells “belong to the Philippines,” says President Duterte.
“They are part of our national heritage.” —INQUIRER FILE PHOTO

MANILA — The United States Embassy in Manila said the historic church bells of Balangiga, Eastern Samar, also hold a “deep significance” for the American people, but promised to work with Philippine authorities to resolve the over hundred-year-old tussle.

President Duterte demanded on Monday that the US return the Balangiga bells which US colonial troops seized as “spoils of war” after they massacred the entire town in 1901.

Duterte raised the Balangiga Massacre in his second State of the Nation Address, as he continued his tirade against the US while trumpeting “warmer” ties with China under an “independent” foreign policy.

“Give us back those Balangiga bells. They are ours. They belong to the Philippines. They are part of our national heritage. Isauli naman ninyo, masakit iyon sa amin (Return them to us, this is painful for us),” Duterte had said.

When contacted for comment, the US Embassy issued a brief statement.

“We are aware that the Bells of Balangiga have deep significance for a number of people, both in the United States and in the Philippines,” it said.

“We will continue to work with our Filipino partners to find a resolution,” the Embassy added.

There were talks for the return of the Balangiga bells in the late 1990s, but these fell through. The Embassy did not say whether negotiations have made any progress.

The Balangiga bells are part of a defining moment of the Philippine-American War, as the pealing of the bells gave the signal for Filipino guerrillas to attack American soldiers in their garrison in September 1901.

As a result, 48 American soldiers and 28 Filipino guerrilas were killed.

US troops retaliated by shelling the town, killing all men above 10 years old and turning Samar island into “a howling wilderness.”

The Americans also burned the church and carried off the three church bells.